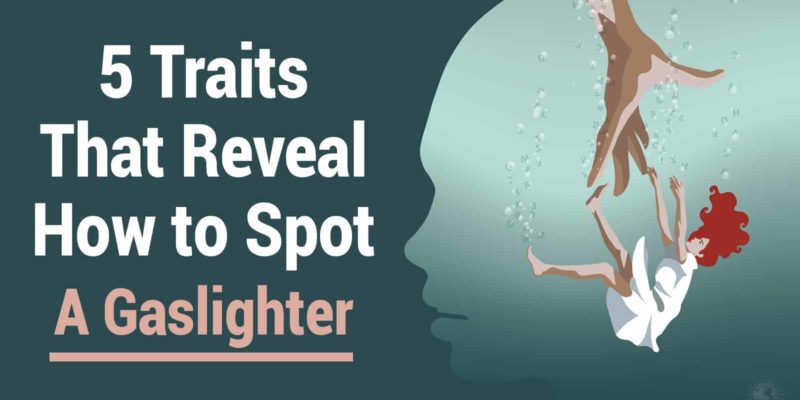 
Abuse is a four-headed monster that can be physical, sexual, verbal, or mental. Unlike the first three types that are quickly identified, mental abuse is more cunning and subtle. Sometimes it’s hard detect a gas lighter and the psychological abuse they bring with them.

Hey, you left the lights on!

Are you a fan of classic film noir? These iconic black and white thrillers used to use the element of surprise and psychological twists to capture the public’s attention. One of those memorable films was “Gaslight,” starring Charles Boyer and Ingrid Bergman.

The plot consisted of a devious husband who slowly tried to manipulate his wife into thinking she was losing her mind. One of his tactics was to light and dim the attic gas lights and suggest that the wife was just imagining it. This highly acclaimed film lent its name to what psychologists today call gaslighting, or psychological manipulation.

How can you spot a gas lighter in your life? These people can be family or close friends, or they can be a love interest. They seem genuinely concerned about you and are trying to look out for your best interests on the surface. However, gas lighters have hidden agendas to play with your mind, so they are in full control.

What is gaslighting for?

At first, it can be difficult to spot a gas lighter because they often seem charming and accommodating. If they are narcissistic or have another personality disorder, the ruse will fade due to their need to dominate. All forms of abuse are about controlling others, no matter what it takes.

Gas lighters generally don’t have to raise their voices or resort to violence at first. They try to achieve their biased goals by cunningly sowing seeds of doubt. It soon makes your target wonder if their thoughts and memories are imaginary. The perpetrator then begins to shape the target’s views, opinions, and memories.

It doesn’t take long for your goals to wear down physically, mentally, and emotionally due to constant self-doubt. At this point, battered people turn to putty in the hands of the gas lighter. If the abuser resorts to physical or mental violence, he can easily manipulate your goals Believe that they are to blame for the outbursts.

• Forced isolation from others

These cases often end with the targets feeling guilty and asking the abusers for forgiveness. It’s an impressive ego boost for the gas lighter’s warped mind. As abused people become more entangled in the dark web of deception and manipulation, the next stage of abuse occurs.

You can often detect a gas lighter for his best efforts to keep his targets isolated. One of the biggest fears of gas lighters is outsiders who may report their mental abuse. They will use threats and other psychological stratagems to keep their targets away from family and friends.

His goal is to divide and conquer, so his goals are scared, lonely, and must depend on abusers for everything. This deep psychological abuse can continue for years. However, the antisocial aspects of abusers can lead them away from their broken goals to seek new ones.

The aftermath of gaslighting and psychological abuse

Are you or someone you know a survivor of gas lighting abuse? Even if the abuse lasts for a short time, it can have devastating effects on your entire well-being. If you didn’t see the gas lighter at first, your self-confidence and esteem might have eroded before you knew it. Perhaps he even came to believe that he deserved to be abused.

Gaslighting damages your feelings of trust towards others and towards yourself. In a changing atmosphere where nothing is what it seems, you may not trust your senses or your memory. It can be quite debilitating and it can take a while to realize you’ve been abducted.

Since the abuser made you doubt your ability to reason and remember, making decisions on your own can be difficult. You may be reluctant to show emotion or tell others how you feel because you have forgotten the feeling of validation. You may feel less than others and unlovable because of the abuse.

When you have been lit with gas, you may have gradually drifted away from your family and close friends. Abusers can only be in control when their targets are alone and vulnerable. It can be painful and embarrassing to try to rebuild your past relationships with your friends and family.

It is understandable that gaslighting can affect your mental health. When your confidence has been slowly eroded with doubt, it may have caused panic and anxiety. You can also develop depression because a callous abuser trampled on your self esteem.

Overcoming gaslighting abuse can also include dealing with post-traumatic stress disorder, codependency, and serious trust issues. As a survivor, you may feel guilty that you missed the gas lighter at first. All of these messy emotions can affect your relationships in the future.

Since you lost feelings of validation from the psychological abuse, you may be eager to receive it again. In desperation, you may become a person pleaser and not take things on your own. These behaviors can make you a vulnerable target for another gas lighter.

1. They start to lie

Lies fuel the cruel gaslighting engine, and the abuser can do so with ease. These deformed personalities often have a long history of pathological lies. Even when people call them to the carpet with undeniable proof, the gas lighter will still defend their lies.

Is your new love interest too good to be true? It may not be when you notice that they are convincing with lies. Even if they are not a gas lighter, you don’t need a relationship based on falsehoods, so go away.

2. They refuse to accept blame

You are human and you will make mistakes. Beware of the gas lighter that has fooled itself into thinking it is infallible. As a master manipulator, a gas lighter will act innocent and outraged even when his faults are obvious.

They have distorted reality in their mind for so long that they always see problems as someone else’s fault. The tell-tale sign is when they try to blame you. If they can’t recognize your mistakes and shortcomings, don’t make the mistake of getting involved with them.

3. They tried to isolate you

At first, it may be difficult for you to notice that you are being pushed away from the crowd. Do they use strong emotions to manipulate you every time you want to spend time with your family and friends? Remember that the most devious tool in the gas lighter is insulation, so this behavior is a red flag to go your own way.

4. They minimize their opinions and feelings

One of your basic human needs is validation, and you need to get it from someone who says they care about you. the narcissistic gas lighter They only care about their feelings and opinions, and they feel threatened when yours don’t match. They use condescending language to minimize any difference of opinion.

When you express your opinions or feelings, they may try to embarrass you by saying that you are exaggerating or that you are too sensitive. If you do not agree, then they will resort to insults, as if you were a minor. No one has the right to tell you how to think or feel, so you must open your eyes.

You can often see a gas lighter after a few conversations. If the argument starts to go south, they may try to manipulate your words to make you look bad. Gas lighters have a devious talent for rewriting past events as if your memory is unreliable.

For example, they may have been furious when you were at the grocery store talking to an old friend. Maybe they said something rude and pushed you towards the door. When they discuss the event later, they may try to say that your friend was rude and that they were taking it for you.

The manipulative person tries to appear caring and uses comforting words to make him sound like a hero. They want me to emerge as the weak-minded loser. Trust your conversational skills and memory, and don’t be fooled by this abusive manipulation. Fight hard not to lose yourself to someone who wants to abuse you and control you.

Final thoughts on how to spot a gas lighter

You can detect a gas lighter when you trust your instincts and refuse to be tampered with. Your best weapon against this psychological abuse is to face the situation. The only gas lights you need in your life are the ones that create the romantic atmosphere on a date with someone who loves you.