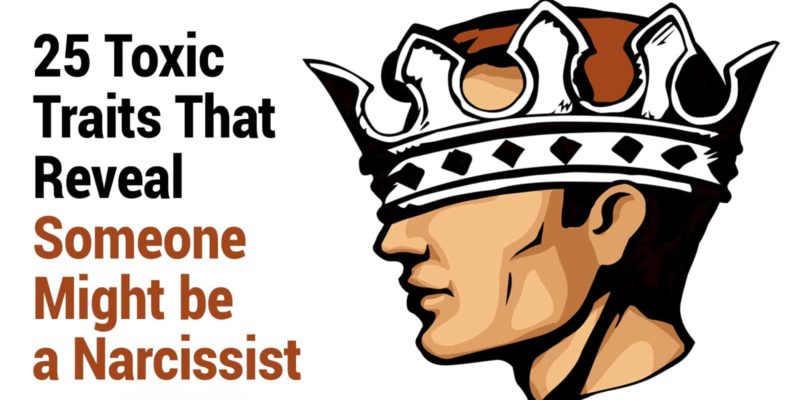 Have you ever come across a selfish person who is manipulative and has many toxic traits that drive you crazy? There are many different people in the sea of ​​life, and some of the people you meet tend to be more dangerous than others. Perhaps you have some narcissistic traits of your own that you would like to work on.

Narcissists are considered to have a toxic personality because they use others to their advantage. They often lack viable relationships because they are so caught up in their life that they cannot help anyone else. Getting tangled up with this person in the dating world or otherwise can be troublesome.

25 toxic traits of the narcissist

Maybe you think that the person you are dating is a bit manipulative and possibly toxic, or maybe you have a friend or family member that you consider narcissistic. Here are the top 25 signs that you are dealing with someone who is narcissistic, manipulative, and selfish.

1. They are picky and criticize others

Narcissists will do their best to bring others down. If they feel that someone looks better than them or achieves more, they will try to destroy their esteem in one fell swoop.

2. They have bouts of excessive anger

When things don’t go the way the manipulative person thinks they should, or if you are about to get caught up in their plans, then be vigilant. These individuals have toxic traits, such as excessive anger, and can explode at any moment. They can get quite scary when they’re about to be discovered, and you don’t want to get in the way of their anger.

3. They never say they are sorry

Even if they are wrong, don’t even think that they will apologize to you. In fact, if you get an apology from them, they will only turn things around to use you more and manipulate you more.

4. They are not responsible for their actions

Even if you caught them red-handed doing something wrong, never think that they will take responsibility for their actions. They would rather blame someone else than take the blame.

5. They have inflated self-esteem.

The toxic personality It seems to others as if there is no one greater who makes more money, is smarter, or more accomplished than themselves. However, deep down, there are feelings of inadequacy that they do not share, and they really have low self-esteem.

6. They sabotage those who prosper

If you have a narcissist in your workplace, then you should stay away from him. If they see that you are doing better than them, they will do anything to sabotage your success. They will lie, cheat, steal and blame you, to make you look bad.

7. They are verbally abusive

If everything goes their way, the manipulative person is fine. However, if things start to get difficult for them, they can become quite verbally abusive. Some will also resort to physical violence.

8. They expect you to drop everything when they need it.

If they have a need, or their life is in crisis, they expect you to give up everything you have to help them. Just don’t expect the same courtesy in return, as their needs always exceed yours and they don’t have time for your drama.

9. They light up others with gas

They can make you question your sanity, especially if they feel it will benefit them. According to Medical news todayGaslighting is a common form of psychological abuse, while the manipulator may cause another person to doubt their sanity.

10. They tend to be pathologically liars

11. They sabotage most relationships

One of the distinctive toxic traits of someone selfish is that they cannot maintain relationships. It is always a red flag when a person has no family or friends in their life. If they don’t even have a friend or family member in their life, you have to do detective work.

12. They exaggerate your flaws

Since this person suffers from low self-esteem, he wants to overcompensate by making you feel bad. Even the smallest imperfection in you will become an important point to focus on for them.

This personality type is often mistaken for someone who has bipolar disorder. According to the National Institute of Health, bipolar disorder has marked periods of mania and depression. When someone is hot and cold, you never know what the day will bring.

14. They do not show empathy

Empathy is not your strong suit, so don’t expect the manipulator to try to comfort you in your moments of pain. However, they will expect you to comfort them.

15. Use manipulative tactics such as silent treatment

Toxic egoistic personality traits will often use manipulative tactics to get you to do what they want. When you don’t give in to their orders, they will use silent treatment or refuse to have sex.

16. They love to name someone and piggyback on someone’s success

If you listen to how they talk, you will think they run with the Hollywood elite. They name drop since they belong to a group of the promising ones, and they will step on anyone’s toes to climb the corporate ladder.

17. Your often strong desire to be the center of attention

At a party or other group setting, this person makes their presence known. They often speak louder for all to hear and often have a commanding presence that is hard to ignore.

Gossip is a strong point for selfish people because they love this method of obtaining information. If gossiping isn’t enough, they use the information they learn to further their agenda.

19. They engage in relational aggression.

One of the toxic traits of a manipulator is that they often engage in relational assaults. If you don’t do what they want when they want it, you will face their fury.

20. They interrupt conversations to talk about themselves.

If you try to talk to this person about what is happening in your life, they will often interrupt you with the events of their day. Their problems are always bigger and important than yours.

21. They put a stone wall to others without giving them a voice

Don’t expect the manipulator to be a good communicator or to try to figure things out. They don’t give you a voice in the relationship, so they will get in the way whenever they can. Essentially, they are unattainable for you.

They use intimacy as a power play to get what they want. They can hold their attention or they can use it to manipulate you. Since sex triggers powerful emotions, they use it to their advantage.

23. Play the puppeteer with your emotions

The classic manipulator often plays with your emotions as if you were a puppet on a string. They will walk away from you, keep things on your head, or even blackmail you into getting what they want.

24. They are openly insulting

While this person may have been very charming when you met them, they have suddenly changed into someone you don’t know. What used to be all praise and compliments has now turned into nothing more than insults. Change can happen overnight and make you wonder why you got involved with them.

When caught or trying to carry out a master plan, they will recruit as many allies as possible. Even if you don’t agree with what they are saying, they will throw you under the bus to make yourself look better.

Remember in the movie The Wizard of Oz when the evil witch had flying monkeys. She got the monkeys to join her in doing her dirty work, and the handler acts quite similarly.

Final thoughts on the traits of the narcissist

It is never easy to deal with a manipulative person. The narcissistic personality is often one that is very preoccupied with the past. If you remove all the layers that protect your heart, you will see a broken person who has probably experienced major problems in their childhood.

People who have suffered trauma or abuse often become more assertive taking control of their life and the situations that surround them. What you see as toxic traits are nothing more than coping mechanisms. Although they seem strong and determined, inside they are broken and damaged.

If you think that a person you are with is a narcissist, you should encourage them to seek help. The key is to deal with situations below the surface and learn new and improved coping skills. While it is not impossible, it can be a daunting task to live with someone who has these toxic tendencies, as it will make your life miserable.