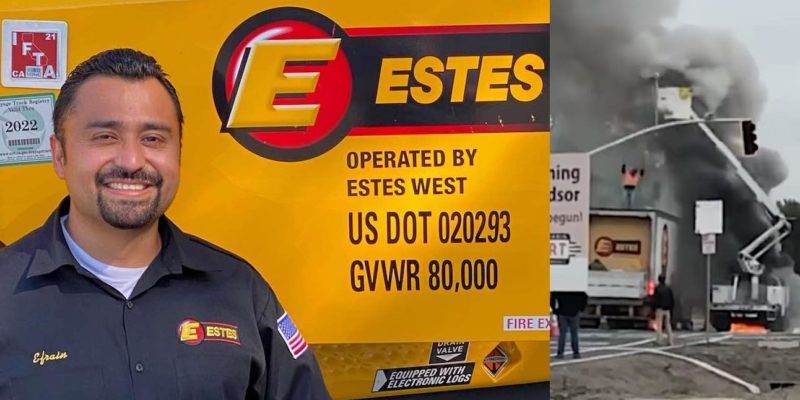 
A trucker was in the right place at the right time to become a hero when he rescued a utility worker who was trapped in an elevated bucket truck, which had caught fire underneath.

With just a few minutes to spare before the truck exploded, a police officer ran towards a tractor trailer that was stopped at a nearby intersection.

The driver, Efraín Zepeda, sprang into action, moving his trailer under the Santa Rosa, California utility worker, unconcerned for his own safety, to provide the man with a means of escape.

Amid plumes of black smoke and flames, the worker was able to jump into the truck and avoid serious injury or death.

Zepeda works for Estes Express Lines, which praised the actions of its drivers.

“It is a miracle that our driver, Efraín, was there just when this individual needed to be rescued from such a dire situation. Not enough can be said about his bravery and immediate actions that allowed the worker to escape, ”said Webb Estes, the company’s vice president of process improvement.

“At Estes, everyone’s safety on the road is our top priority and Efrain’s heroic deeds exemplify this to the fullest.”

LOOK: Woman frantically bangs on door to save family from fire just before roof collapses

The Sonoma County Professional Firefighters union, which posted the video on Facebook, summed it up: “Our citizens never cease to amaze us!”

LOOK the rescue is developed below in the video of # socolocal1401…

25 Toxic Traits That Reveal Someone Might be a Narcissist