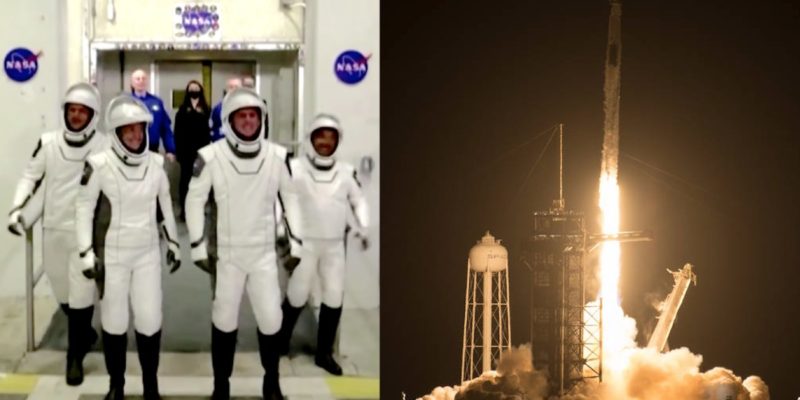 
A team of four astronauts launched by NASA and Elon Musk’s rocket company SpaceX made history by becoming the first humans to be propelled into space by a completely repurposed booster rocket.

SpaceX has previously reused the thrusters multiple times since 2017, but they were only carrying cargo.

‘Crew-2’ astronauts Shane Kimbrough, Megan McArthur, Akihiko Hoshide and Thomas Pesquet were launched into space by the same Falcon 9 rocket booster that sent four of their colleagues to the International Space Station (ISS) in November during the Crew-1 mission.

The international crew, including the French first commander and an astronaut from the Japanese space agency JAXA, took off early Friday from the Kennedy Space Center in Florida and are now orbiting the Crew Dragon spacecraft to begin a six-month science mission in the Spacial station. .

During the Crew Dragon flight, SpaceX will command the spacecraft from its mission control center in Hawthorne, California, and NASA teams will monitor space station operations throughout the flight in Houston.

POPULAR: 50 years ago, NASA sent a map into space to help aliens find Earth; now they have an awesome update

“It has been an incredible year for NASA and our Commercial Crew Program, with three manned launches to the space station since last May,” said Acting NASA Administrator Steve Jurczyk. “This is another important milestone for NASA, SpaceX and our international partners at ESA (European Space Agency) and JAXA. It will be an exciting time to see our crews greet each other at the station for our first crew transfer under the Commercial Crew Program. “

Elon Musk, SpaceX Chief Engineer, said: “I am truly proud of the SpaceX team and honored to be partnering with NASA and helping JAXA and ESA as well. We are delighted to be part of the advancement of manned spaceflight. “

RELATED: He came to the United States to study with only $ 300 in his pocket; She is now NASA Director for the Mars Rover

NASA notes that this trade partnership with Musk’s company has several firsts, including:

NASA Television, NASA App and their website they are providing continuous live coverage through docking, hatch opening and crew welcome ceremony aboard the orbital outpost.

Crew-2 will be joined by ISS residents Shannon Walker, Michael Hopkins, Victor Glover and Mark Vande Hei from NASA, as well as Soichi Noguchi from JAXA and Russian cosmonauts Oleg Novitskiy and Pyotr Dubrov. For a short time, the number of crew members on the space station will increase to 11 until Crew-1 astronauts Walker, Hopkins, Glover and Noguchi return a few days later.

When Aki Hoshide joins astronaut Noguchi during the commercial crew handover period, it will be the first time that two JAXA astronauts have been on the station at the same time.

“We know that it cannot wait to start work,” ESA said of its French commander.

LOOK astronauts in their clever modern spacesuits climb aboard and take off on their historic mission, with Frenchman Thomas Pesquet expressing his enthusiasm …

LAUNCH this exciting news into your social media orbit …

25 Toxic Traits That Reveal Someone Might be a Narcissist

7 Ways To Connect With Your Emotions