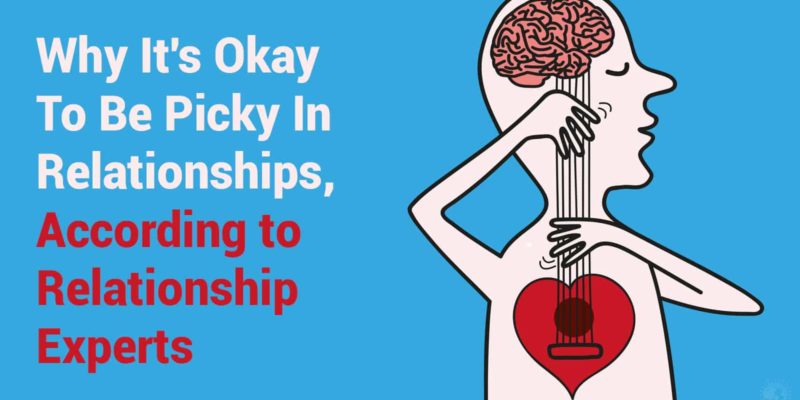 
Are you currently single? Are you often told that if you lower your standards and stop being picky, it will be easier for you to date? Do you sometimes feel embarrassed by your perception of being fussy?

Keep your chin up and activate your positive thinking! Being “picky” isn’t as bad as you might think. Here’s how experts reveal 8 reasons why it’s okay to be picky in relationships.

1. You have to focus on the long-term facts

If all you are interested in is an adventure, you don’t have to be demanding. But if you are looking for long-term relationships with the ultimate goal of a life partner, then long-term thinking is crucial. This means being significantly more selective when it comes to the people you choose to date.

Licensed Clinical Social Worker and Psychotherapist Leah Aguirre states that while living in the present is important for healthy relationships, you need to think about the big picture. Long-term implications exist in all relationships, and if you want to see them through, you need to prepare for them.

In other words, the chemistry and connection may not be enough to get you into a situation of being together forever. Different expectations, future desires, and general compatibility issues can all cause long-term plans to fall apart. You have to think if you share these things in common:

Being choosy allows you to rule out potential partners with whom you may not really go the distance. Saves you time and heartache in the long run.

2. Little things you overlook now may bother you later

The little quirks in your partner should be things that make you want. Finding bothersome little personal traits of yours is a sure way to end up in a negative and despicable relationship.

According to Andrew G. Marshall, a relationship expert, Most people assume that important problems are the main cause of difficulties in relationships. But in reality, minor irritations are more likely to build up over time and even larger problems to dominate. The reality is simple: if something small that your partner does upsets you a lot, chances are there are bigger issues at play and that could point to a long-term incompatibility.

Being picky allows you to avoid ending up in situations where seemingly small things end up causing big problems. While it’s possible to learn to accept the little things that bother you, it’s also understandable if something you can’t bear from someone makes you realize that this is not the right person for you.

3. You can learn from past relationships

When past relationships don’t work out, you need to stop for a while and think about why. When you realize what made you incompatible with your exes, you also realize that you have to be a bit more demanding when you learn from these mistakes and choose new partners.

Studies They have long indicated that people tend to gravitate toward relationships similar to those they had in the past. That, unfortunately, means you can end up stuck dating similar people for a long time if you don’t learn to be picky.

The good news is that the same research mentioned above also reveals that people who are more open to new situations are less likely to choose new partners who are similar to their old ones. So if you go out of your way to open up your mind and your world, chances are you’re not limited by what naturally attracts you, and if that means being more demanding, that’s fine!

4. Your intuition can be powerful

Intuition is often dismissed as purely illogical, but sometimes listening to your instinct isn’t a bad thing, Aguirre says. If things seem okay with someone, but they feel bad and you can’t figure out what may be causing it, it’s okay to decide to cancel before things get serious.

Think of it this way: often where there is smoke, there is fire. The fault could be on their side, your side, or neither of you, but the bottom line is that if things don’t add up or just feel “bad,” you have every right to finish things or back out. Especially in new or fledgling relationships, you don’t need to justify a decision you make based on instinct, especially if it becomes increasingly clear that something is wrong every day.

5. You shouldn’t be limited by sunk costs

Sunk cost refers to a phenomenon in which people are more likely to hold on to difficult or even painful situations if they have invested a significant amount of something in them. This could be:

Marriage and Family Therapist Darlene Lancer states that a large number of people remain in relationships in which they are unhappy. They can feel suffocated, controlled, or abused and still stay, despite being miserable, and a lot of that comes from the feeling that you’ve already invested so much in this relationship, why leave?

When you are demanding, you do not get carried away by these things. Making an effort in a relationship that you later realize is not going to work will not make you unhappy. You will know to move on and will not be obsessed with the idea that you have “wasted” something. In fact, you will have learned and grown from this relationship and will be wiser with future ones.

6. You know your essentials and your key points

Some examples of common reasonable must-haves include:

Some examples of common and reasonable obstacles include:

Animal studies have shown that older people may be more likely to be selective when choosing friends, much less partners. Why? Because they look for more positive relationships towards the end of their lives and find out what works for them!

People get tired of the drama and trying to make things work. They know what they like and they stick with it. It’s a perfectly respectable approach to dating, as long as you’re reasonable with your must-do and deal-breaker lists. The trick is to be just the right amount of fussy!

7. You know and appreciate yourself

You know who you are. And you know what works best for you. You know your flaws, your strengths and, above all, you know that you deserve to be appreciated, and you also want to appreciate your partner in the same way.

Having high standards is often looked down upon, but there’s nothing wrong with respecting yourself, he says Licensed Marriage and Family Therapy Associate and Certified National Counselor Heather Gillam. The time you spend looking for someone you are compatible with is not “wasted” time, it is time you can use to work on yourself!

8. You shouldn’t have to settle

No one should have to decide on a partner. There is no point picking someone just so they don’t like you or wish you did better later. And think how negative it is for someone to know that you are only dating them because you couldn’t find the right person!

Research has shown that dating partners are likely to narrow down their options for choosing “candidates” when settling down. It may be some way of forcing positive thinking When you think dating is difficult or hopeless or that you may be completely unaware. But the bottom line is that it happens. Here are the four things people can “settle” for when choosing candidates for a relationship:

Stability or reliability versus good health or physical attractiveness

People can choose to quit emotional stability for physical attraction levels, or you can happily ignore someone’s health status for the sake of greater reliability.

A person is likely to compromise someone’s social skills or character in exchange for compatible or similar religious beliefs, but they are also likely to accept someone with a different religious background if they are sociable.

Professor of psychology, practicing clinician and researcher. Noam Shpancer, Ph.D., clarifies, however, that this process is used primarily for the selection of romantic candidates, not for actual decisions about whether to “accept” those candidates or not. Acceptance depends on very personal and often mysterious personal wishes.

Essentially, by “settling” by choosing between the traits you want in a partner during nomination selection, you are basically performing arbitrary tasks that don’t even matter when you actually make your entire decision. Why start by settling when you can, from the beginning, follow your true desires?

There is no race to the land of long-term relationships. You can take your time and define your own standards for a future partner, and that is your choice and your right. It’s up to you who you hang out with, and if what you need to be is being the so-called “picky” then there’s no shame in owning that.