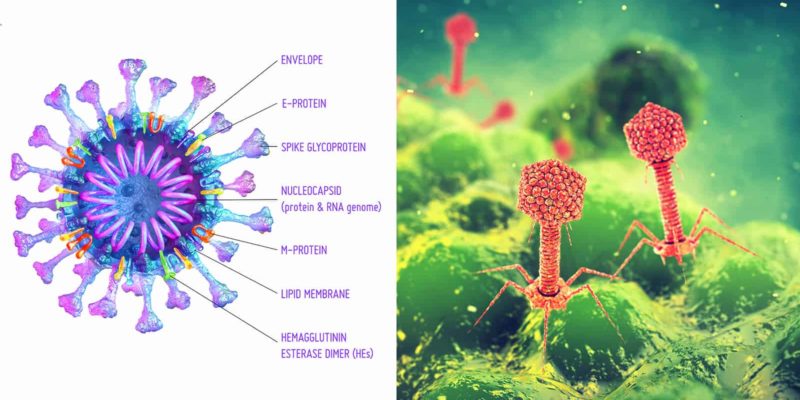 For the first time, researchers have discovered how viruses like colds and polio “package” their genetic code. This allows them to infect cells, but the scientists hope the study could result in new drugs to fight viral infections.

The newspaper PLOS Pathogens published the findings on January 8, 2021, made by a research team from the Universities of Leeds and York.

Viruses spread when a cell becomes infected and the virus copies its genetic material to other cells. This intricate process involves the creation of something called virions or infectious copies of the virus. Each virion consists of a protein coat that carries a full copy of the viral genetic code. Once virions are formed, they can spread to other cells and cause infection in humans.

Scientists, until now, did not know exactly what he did contagious virus, or how they “packaged” their genetic material. This groundbreaking study may lead to more research on how to stop viruses in humans.

Professor Peter Stockley, former director of the Astbury Center for Structural Molecular Biology in Leeds and part supervisor of the research, said: “This study is extremely important because of the way it changes our thinking about how we can control some viral diseases. If we can interrupt the virion formation mechanism, there is a possibility of stopping an infection in its tracks. “

“Our analysis suggests that the molecular characteristics that control the virion formation process are genetically conserved, which means that they do not mutate easily, reducing the risk of the virus changing and rendering any new drug ineffective.”

Professor Reidun Twarock of York also supervised the study. Experts from the fields of mathematical biology, electron microscopy and molecular biology participated in the research.

The research focused primarily on a bovine virus called Enterovirus-E, which does not cause infections in humans. However, scientists have found that it generally mimics poliovirus, a dangerous virus that causes polio. This virus prompted the World Health Organization to begin a virus eradication initiative in hopes of curbing the disease. Enterovirus includes virus like rhinovirus, which causes the common cold.

This study looks at the role of RNA packaging signals, which are short regions of the RNA molecule. Together with the proteins in the virus casing, the RNA signals ensure the precise and efficient creation of virions. Using molecular biology and mathematics, the researchers determined probable sites on the RNA molecule that can act as packaging signals. They used advanced electron microscopes at the Astbury Biostructure Laboratory at the University of Leeds to observe this process.

This is the first time in history that scientists can visualize how genetic codes operate in a virus of this type.

Professor Twarock added: “Understanding in detail how this process works and the fact that it appears to be conserved in an entire family of viral pathogens will allow the pharmaceutical industry to develop antiviral agents that can block these key interactions and prevent disease.”

While this research could drive the development of better treatments for viruses, more studies are certainly needed. However, scientists have begun researching another technique that could also prevent viruses. First discovered in the late 1990s, scientists finally understood how it works in 2007. Called CRISPR, this involves removing faulty DNA sequences that recognize and respond to disease.

How CRISPR Can Prevent Viruses

CRISPR involves gene editing or removing a certain code in our DNA that causes it to malfunction. Scientists then replace the faulty DNA with an intact version, eliminating the process that leads to disease. The acronym CRISPR It represents Cshimmering Regularly Ispaced Short Palindromic REPEAT. This term describes a family of nucleic acid sequences that scientists first discovered in bacteria in the 1990s.

They discovered that the bacteria contained copies of virus genes that they had mysteriously stolen from viruses. The researchers wanted to know how and why this happened, but didn’t get their answer until 2007. Basically, they found that CRISPR enzymes protect bacterial cells against infection. So if a virus tries to infect the bacteria, CRISPR cells intuitively find the nucleic acid sequences embedded in the code. Then he removed the potential deadly viruses found within the CRISPR sequences.

Since researchers discovered how proteins within bacteria could break down viruses, they realized the potential for human application. The scientists thought that if they could edit the genes that caused the viruses to infect humans, they could eradicate the disease entirely. They use a protein called Cas9 in conjunction with CRISPR technology to find codes that cause the immune system to malfunction. They then cut out this gene to remove it or replace it with a new sequence.

While this innovative technology could serve as a powerful tool to control viruses, some people remain skeptical. Controversies over the ethics of gene editing have sparked debate among scientists over the years and more research is needed. However, it is reassuring that some potential solutions have been found regarding virus removal.

Natural ways to protect yourself from viruses

While these tips may not guarantee that you won’t get sick, having a strong immune system can lower your chances of catching a virus.

Final thoughts: scientists have discovered why viruses are so contagious

The molecular biology behind viruses is complex and is not easily understood by most of us. In simple terms, viruses have a certain way of packaging their genetic material to infect cells. However, scientists believe they have found a way to target areas of RNA strands that can harbor these packaging signals. With this knowledge, the researchers anticipate the arrival of better antiviral remedies in the future.

In addition to this study, previous research found that gene editing could help eliminate viruses. However, scientists must meet more research needs in both fields before we see more breakthroughs.

The Art of Weaving | DailyGood