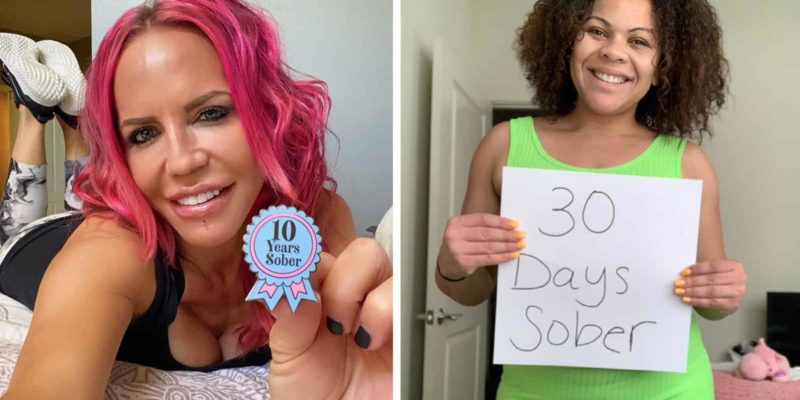 During the pandemic, a group of moms came together with one goal in mind: to help each other with sobriety. The pandemic left many people without work, homeless and, in situations in which they never expected to find themselves. It has put immense pressure and stress on people dealing with their sick or unemployed loved ones. As a result, many have turned to drugs and alcohol to cope, sadly.

According to the Centers for Disease Control and Prevention, overdose deaths increased significantly during the pandemic. Sales and alcohol consumption also increased dramatically, according to a study by the JAMA Network. Sober Mom Squad wanted people to know that they are not alone and to offer moms much-needed support. The group gives people a safe space to talk openly and connect.

Sobriety brought together a group of women.

In March 2020, Emily Lynn Paulson, a recovery coach and addiction awareness facilitator, noticed a huge increase in alcohol use. People had started calling and texting her in a panic drinking habits during the pandemic. A mother approached Emily and told her that she thought she was just a social drinker, but found herself drinking at home all the time.

After receiving many phone calls and similar messages, Emily and four other women decided to do something to help. That month, they co-created the Sober Mom Squad group to support women trying to stay sober during the pandemic.

Eight months later, the group had become so large that they decided to start a paid membership program. Memberships offer services like virtual meetings, private forums, discounted breakouts, and more. Women saw a great need for a sobriety support group due to the large number of people struggling during the pandemic.

As moms kept reaching out to Emily for advice and support, she reached out to other sober influencers on Instagram for help. Since they worked in the same space, he knew they could collaborate and develop a plan. The Sober Mom Squad started as weekly Zoom meetings, where moms could connect and talk about the challenges of motherhood. The additional focus of sobriety came onto the scene a little later.

At first, the team just wanted to create a small, safe space for women to connect. As they got more comfortable, people began to open up about their challenges with sobriety. While the group focuses on helping moms stay sober, it is open to everyone, whether they drink or not. Whether they’re sober, curious, totally sober, or fighting addiction, the Sober Mom Squad welcomes you with open arms.

Especially during the pandemic, many people felt isolated and were unable to connect with people as they normally would. For those struggling to stay sober, the pandemic made the situation worse. Sober Mom Squad recognized that so many moms and women needed a healthy outlet, a way to connect with other people who are going through the same thing.

In an interview with the TODAY Show, a mother sheds light on the huge culture of alcohol consumption among moms. Becca Heary of Sarasota, Florida, says the pandemic highlighted the widely accepted alcohol addiction among mothers. She taught yoga for 12 years and organized yoga and wine nights for school fundraisers. Becca said binge drinking is a bigger problem than people think in “mommy’s wine culture.”

In the Sober Mom Squad group, Becca met many moms with stories similar to hers. Some moms talked about drinking mimosas on game dates, casually opening beers at soccer games, and more. At so many events, wine and liquor were easily accessible and widely accepted, so they didn’t give it much importance at the time.

While Sober Mom Squad is not a substitute for an alcohol recovery program, it offers valuable tools and support. It gives moms the platform and the opportunity to discuss the problems they face in daily life.

We live in a culture that glorifies alcohol consumption, making it seem like a harmless way to relax. Toxic memes and cleverly marketed products like T-shirts and mugs that encourage alcohol consumption only add fuel to the fire. If you search online, you can find thousands of articles with messages like “Mommy needs wine.”

This shows the prevalence of the wine and drink culture among mothers. Unfortunately, it is not seen as a problem until it becomes a full-blown addiction. However, the Sober Mom Squad does not totally condemn alcohol. The founder wants to clarify that she is not prohibitionist; wants to raise awareness about the dangers of alcohol.

The group offers a more subtle approach to recovery, where sobriety itself is not the primary focus. Instead, Sober Mom Squad wants moms to realize that they can have a fulfilling life that doesn’t just revolve around alcohol. The founders don’t pressure women to label themselves sober or not. Rather, they just wanted to create a space for women to discuss an addiction-free life.

They talk about difficult topics and give women the understanding and support they need. While they encourage each other to stay sober, they do not embarrass the women about the situation they are in on their journey. They want to raise awareness about the use of alcohol as a survival mechanism.

His website makes it clear what they are about: “Motherhood is not easy. Sobriety makes it better. The connection makes it possible. The Sober Mom Squad is just what it sounds like: a Mom squad who are already sober, those who are simply dipping their toes in exploring an alcohol-free lifestyle, and everything in between! “

Millions of people suffer from alcohol addiction and many do not receive the support they need. Among mothers, the drinking culture is widely accepted, which makes it even more dangerous. For moms looking to stay sober or stay sober, the Sober Mom Squad provides connection and encouragement. While it is not a recovery program, it can certainly benefit anyone interested in a life of sobriety. For more information, visit their website.