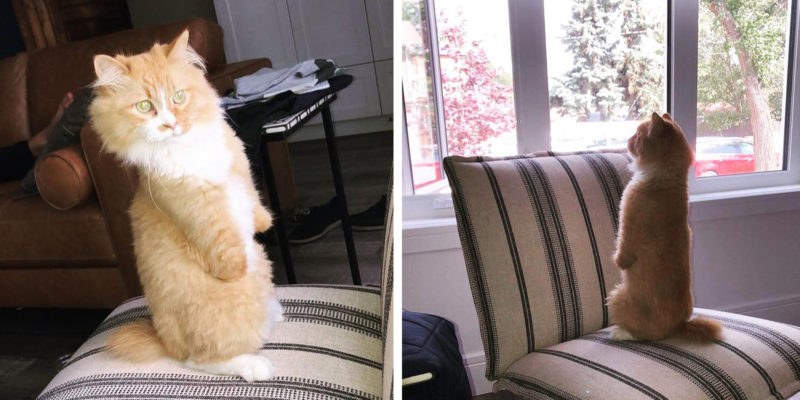 Rex, the cat, lost its front legs and tail due to frostbite, but still outweighed the odds of survival. His owner says that despite the challenges he faces, he is still a loving and carefree guy. This is his incredible story.

“Rex is a super special cat because its front legs and tail are missing,” says its owner. “A lot of people when they see it for the first time have the question ‘Was he born that way?’ The answer is no.”

Its owner goes on to say that it had both front legs and its tail at birth. However, when he lived on a farm when he was a kitten, one day he fell into his water dish. Its front legs and tail got wet, and in the low temperatures, the water froze. Due to the exposure, he froze, and its tail and front legs ended up falling off.

“The farm owners told me they were considering euthanizing him when it first happened, but he had so much desire to live and he was a fighter,” said Rex’s new owner. “So they left him to see how he would fare, and he ended up surviving the winter.”

This kitten would beat the odds.

This little kitty wouldn’t give up without fighting and beating the odds after all. Rex’s new owner fell in love with him and his story and realized that he didn’t want to live without him.

“I asked if I could take it home and eventually the owners agreed to take it with me. The first thing I did was take him to a vet, because to my knowledge, I hadn’t seen a vet before. “

There, he received all the necessary vaccinations and a wellness checkup. They also neutered him, which is standard for most animals today.

Rex’s new life turned out better than anyone had expected.

The vet told his new owner that he still had a good quality of life despite his condition. His legs and tail had healed perfectly and he was able to live a happy and normal life.

“I wasn’t really sure what to expect when I first brought it home because I didn’t really think that far,” the owner said. “But, it ended up being so well adapted! He could climb on any piece of furniture he wanted, such as the sofa, bed or chairs, and he could get up from them without help. “

“I am very lucky to have such a unique cat. And it is also the best. It is the most affectionate, kind and affectionate cat in the world ”, says the owner effusively.

She says they named him Rex in honor of the T-rex because of his short arms. Not to tease him, of course, but the name just stuck after a while. Also, its owner says that its little front legs make it even more adorable and lovable.

“He jumped at me like a bunny, and it was the cutest thing I ever saw in my life,” he said. “He wanted to be a pet, he purred all the time and he wouldn’t leave my side. I think the fact that it doesn’t have front legs or a tail makes it that much cuter. “

His owner loves to watch him play with his laser light toy. Watching him try to catch the light with his little arms is quite entertaining! He has learned to walk very well with only two hind legs and uses them to remove furniture. Although it has a soft landing, like clothes or pillows, it can still land on its front bumps. He does not let his condition prevent him from living a normal and fulfilling feline life.

The adorable two-legged cat now has tons of fans online.

Rex has amassed a huge following on TikTok and Instagram and has a product line too! Her owners sell T-shirts, hoodies, mugs and stickers with her adorable face. On TikTok, they post videos of him just living his best life, and people have fallen in love with him.

There they upload videos of him playing with his two brothers Pancakes and Slammer. All three cats can be pretty messy at times, but overall, they get along very well. They nap, snuggle, play and eat treats together, and sometimes they cause mischief too! But what would a life with cats be like without a bit of a commotion?

Rex also entered a competition for America’s Favorite Mascot and made it to the quarterfinals! If you want to vote so you can proceed to the next stage, you can do so here. We support it!

If you want to see more of Rex, follow him on TikTok for entertaining videos of him and his siblings. You will mostly find videos of Rex hopping around the house, jumping up and down furniture, and begging for treats.

However, there are quite a few clips of him cuddling or sleeping alongside his siblings. There are even photos of his brother Pancakes helping Rex clean up since he can’t. You will laugh, cry and find hours of entertainment watching Rex, the cat who beat the odds of survival. We hope you enjoyed listening to her heartwarming story!

Final thoughts: the Rex cat lives a normal life and beats the odds despite losing legs and tail

Rex lives an amazing life thanks to his two owners, who never gave up on him. Although the cat does not have front legs or a tail, it does not let that stop it from enjoying every day. You can still enjoy all the comforts and luxuries of cat life and it has adapted quite well.

He shares his home with his two cat brothers, Pancakes and Slammer, who help him survive. They clean the coat and take care of it in general, as the brothers should. In general, Rex has conquered a lot and has a loving and optimistic personality despite what has happened. Show that you can overcome anything in life with the right mindset.