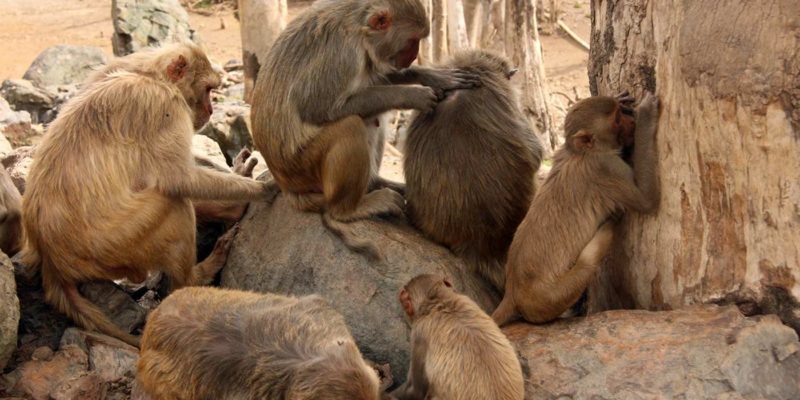 
An interesting new study seems to indicate that monkeys increase the size of their social circles during times of conflict or resource scarcity.

Researchers looked at Puerto Rico rhesus macaque populations on Cayo Santiago after Hurricane Maria in 2017, and observed that each individual increased the number of grooming activities, as well as the number of other monkeys groomed, following the disaster.

Rhesus macaques are more closely related to humans than other monkeys, and the results speak a bit about how humans bond during disasters.

Resources that were once abundant enough to be guarded by small groups of monkeys were now scarce, and instead of transforming into the monkey version of the Mad Max: Road Warrior páramo, the groups expanded their social circles.

The increase in social connections was measured by the monkey’s grooming habits, as well as by sitting six feet from each other, metrics that could be compared to friends having lunch or coffee, explains the lead study author. The most common bridge to other groups was friends of friends.

The results fit perfectly with the “social buffer” hypothesis that social animals will surround themselves with more members of their species during or after difficult times. This was true for the extroverted macaques, but even more so for the introverts and isolates, who increased their social bond much more than the extroverts.

MORE: Baboon, bear or bison: find out which animal personality best suits yours in a fun free quiz

They also found that there was no additional effort to strengthen ties between relatives or with the most powerful individuals in the group, only efforts to increase the size of each monkey’s social network.

The researchers postulate that the nature and details of the findings suggest that by expanding their social network, they are potentially gaining access to resources known or controlled by another monkey, and the more monkeys, the more resources.

It’s a hopeful picture: monkeys come together in times of crisis, something we should think about the next time a crisis hits our shores.

SHARE this story with your tribe on social media …

How to Use Scientific Thinking to Be More Right