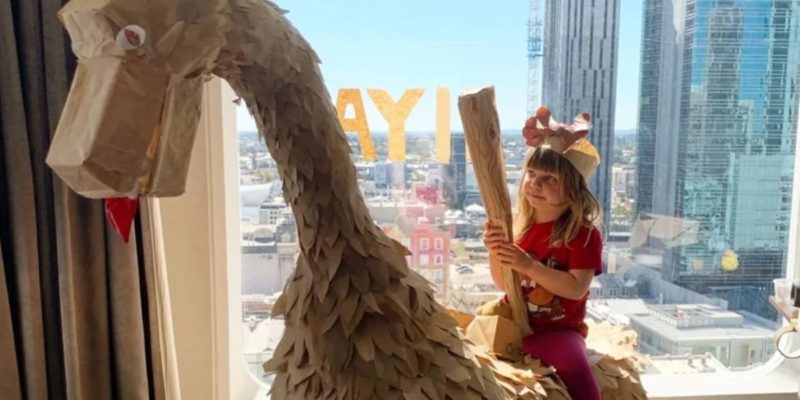 
A new species of dinosaur was recently discovered in a hotel room in Perth, Australia. While the origins of the most recognizable dinosaur specimens can be traced back to the Mesozoic Era, the “Bagasaurus” is entirely the product of the ingenuity of parents in the Age of COVID.

Carly Catalano knew that moving from British Columbia to Australia with her partner, Sam, and their 3-year-old daughter, Florence, during the pandemic would mean undergoing a mandatory 14-day quarantine in the hotel room.

Facing two weeks in tight quarters with an active child was a situation that required ingenuity, so Carly and Sam devised a strategy to keep their precocious offspring engaged.

Working with take out bags and containers, some disposable silverware, an ironing board, and a few other sundries, the family began building their own DIY dinosaur.

If members of the scientific community would like to take note: the Bagasaurus is 1.5 meters (about 5 feet) tall, adores little girls who dress in matching outfits with paper bag scales, and is a herbivore, or It would be if she actually ate the homegrown sprout Florence offers her papier-mâché pet on a regular basis.

“We have been growing wheatgrass,” Carly explained in an interview with CBC Radio West. “So she wanted … to feed the dinosaur wheatgrass, as well as eat most of it herself.”

RELATED: Cool Things to Do at Home While Quarantined: Let’s Be Positive About a Pandemic

In addition to its other commendable qualities, while the Bagasaurus does have some big claws, its carbon footprint is eco-friendly.

Instead of the fossil remains being sent to a museum (or garbage can) when the family leaves the hotel, they plan to recycle the entire beast, leaving only the head as a memento of their prehistoric adventure.

(LOOK CBC’s video on this story below).

230,000 Acres of Tropical Rainforest Protected as Biodiversity Hotspot For Jaguars in Belize