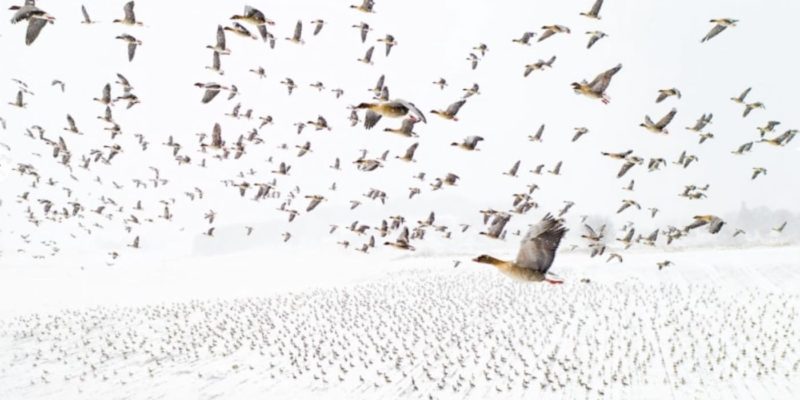 
A flock of thousands of pink-footed geese taking off from their Norwegian hatcheries captured by local photographer Terje Kolaas won first prize at the 2021 Drone Photo Awards.

The first prizes of the Drone Awards are presented in the eight categories: Nature, Wildlife, Urban, People, Sport, Abstract, Storyboard and Wedding. These are some of our favorites:

First place in the Urban category was won by the photo titled “Metaphorical statement about the city and winter”, By Russian photographer Sergei Poletaev. The image shows an ancient monastery near Moscow with a large power station in the background.

Omani photographer Qasim Al Farsi won the Wildlife category with “Back to adventure, ”An aerial shot that immortalizes a green turtle ready to return to the water after laying its eggs off the coast of Oman.

“Gold at the end of the rainbowFrom Australian photographer Phil De Glanville, who captures a striking rainbow over surfer Ollie Henry taming a terrifying wave, is the winning image in the Sport category.

Pierluigi Orler from Italy was runner-up in the Sport category with this image of a snowmobile in Bernau, Germany.

“Fishing in the mangrove forest, ”Taken by Vietnamese photographer Trung Pham Huy, won in the People category. It portrays a fisherman who begins his workday in the mangrove swamp of Tam Giang lagoon, in a white winter environment.

Alexandr Vlassyuk in Kazakhstan took a runner-up in the People category, a shot of people lying on the ice at the Kapchagai reservoir.

This shot by Chinese photographer Wujiang Zhu captured in a flower garden in Dafeng Jiangsu was a finalist in the wedding category.

The image portraying many small tributaries, made by Romanian photographer Gheorghe Popa, won first place in the Abstract category. The photo documents the water channels in the mountains of Transylvania.

See all the winners and runners-up of the Drone 202 Awards Gallery on their website.

The images will be presented in an exhibition that will take place in the Italian city of Siena from October 23 to December 5 as part of the Siena Awards festival dedicated to the visual arts.