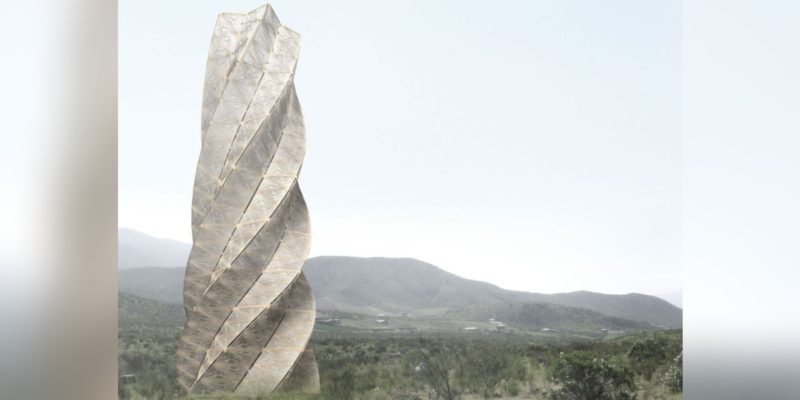 
How can a megacity find water for 10 million people if it exists in the desert? Nets to catch mist, erected in the hills above the city of Lima, could solve the city’s water shortage forever.

A twenty-meter-high (60-foot) tower of coiled nets will be unveiled this summer in the city as a solution to the threat posed by hot weather to the unstable foundations of water availability in Lima.

In addition to glacial runoff from the Andes and water from the stressed Rímac River, Peru’s capital accumulates just one inch of rain a year. The city experiences high annual temperatures and water consumption rates, despite being located in a desert, are higher than world averages.

However, a unique feature of Lima’s climate offers a way to alleviate some of this demand. Located on the coast, the surrounding hills of Lima are constantly bathed by waves of mist coming from the Pacific Ocean, and the moisture captured by the plants ensures that they remain green throughout the year.

Inspired by the rudimentary two-dimensional mist nets installed by rural communities across the continent, Alberto Fernández, a Chilean designer who is currently studying for a PhD. from University College London, he wanted to extrapolate the technology to its more sophisticated conclusion, because while the networks had major flaws, their basic principles were brilliant.

The towers and mist collection nets that Fernández unveiled are made of aluminum wrapped in a plastic-covered copper mesh and could generate up to 1,000 liters of water per day. worth 3.6 million liters per year, if enough are installed.

RELATED: The new device can power 100 small LED lights simply by harnessing the energy of a single drop of water

Their imposing structure allows them to climb into the clouds, collecting more vital water vapor, and their spiral shape means that regardless of the direction of the wind, the moisture-rich mist will hit some part of the structure directly.

The water will be used largely for agriculture, as the water would need to be filtered before consumption, which will help free up resources for city dwellers.

Cheaper than the desalination of seawater or the filtration of water from Rímac, the towers and networks, which according to Fernández could be built up to 200 meters high, are part of a myriad of designs for the Lima 2035 Project.

PLUS: Solar energy panels draw water out of the air for Navajo families who have none

Point to reverse current desertification trends to create an oasis of regeneration for human-centered and sustainable food systems that promote healthy diets and better incomes in the driest megacity on Earth.

(WATCH the video about the fog catching towers below).

SHARE this exciting innovation with friends on social media …

Does a Friend Secretly Resent You? 25 Signs That Reveal a Toxic Person

10 Behaviors That Reveal Someone Won’t Take Responsibility for Mistakes