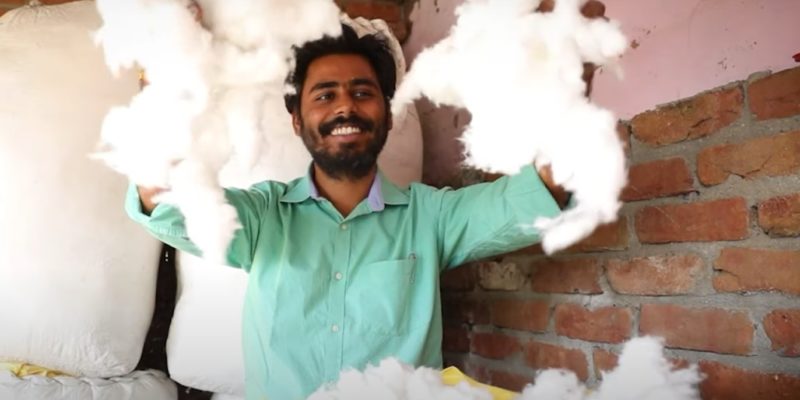 
An eco-warrior has made an impressive amount of money making toys, key chains, mosquito repellants, and compost from old cigarette butts.

Naman Gupta, 26, was inspired when he saw a huge pile of cigarettes left over after a party and wondered how many were thrown away around the world on a daily basis.

So now he runs a company that installs containers in cities to collect cigarette butts, which are then recycled into anything from cushions to key rings.

Naman from Uttar Pradesh in India said: “There was a misconception that it should be made of cotton, so not everyone notices the problem that it is actually plastic.

“There were no laws or companies that recycled or managed this type of waste, it was a completely new concept in India.

“I am passionate, it is not just about money, we are doing it to serve society and address the problem that society has and provide the solution.”

Naman was in his third year at the University of Delhi studying trade when he decided he wanted to start the first cigarette recycling company in India.CODE Effort.

The 21-year-old found cigarettes are the most littered object in the world, and the plastic in the filter takes up to 12 years to degrade.

It also forms microplastics in the process, which can inhibit plant growth in the soil and are highly toxic to aquatic life.

The founder of the company, Naman, receives up to 6,000 kg of cigarettes each month, which are deposited in garbage cans called VBins outside street vendors and bread shops.

Sellers receive a fee per kilo of cigarette butts they collect.

The workers in his factory divide the cigarette butts into three parts: the filter, the paper, and the leftover tobacco.

The filter, made from a plastic called cellulose acetate, is crushed, chemically treated for 24 hours, and then made into filler for cushions, soft toys and soft keychains.

Paper and tobacco are made into compost sold to farmers and growers, or household mosquito repellants.

The wastewater produced in the process is also reused and the fabrics used to make the stuffed animals are sourced from local suppliers.

CODE Effort, which stands for Conserving Our Depleting Environment, is currently studying the use of cigarette filters to create air purifiers to combat air pollution.

MORE: Nigerian houses built with thousands of plastic bottles, 12 times stronger than bricks and an earthquake

Smoking in India is such a taboo that it is not always supported, even with an environmentally friendly initiative.

Naman said: “There were many critics: the waste problem as a whole is an underrated topic, not everyone is very interested in discussing climate change and waste management.

“I believe and have faith in God that if you are serving society, he will help us overcome all obstacles and lead us to success.”

RELATED: He spent his vacations picking up trash in the US, and strangers contributed help and gasoline

The businessman hopes to encourage people to stop smoking and dispose of them wisely.

He said: “Our business model is on a mission to eradicate cigarette waste in our society in an environmentally friendly way.

“I personally don’t care if someone is smoking, that is their choice, but if they are eliminating it inappropriately, then I am a little concerned and want to change their habit slowly.

“I want to encourage people to quit smoking and switch to better habits because then the cigarette butt problem will automatically resolve itself.”

(LOOK the Video TN story about Naman’s work below).

Blush Techniques: How to Apply Blush Like a Makeup Artist