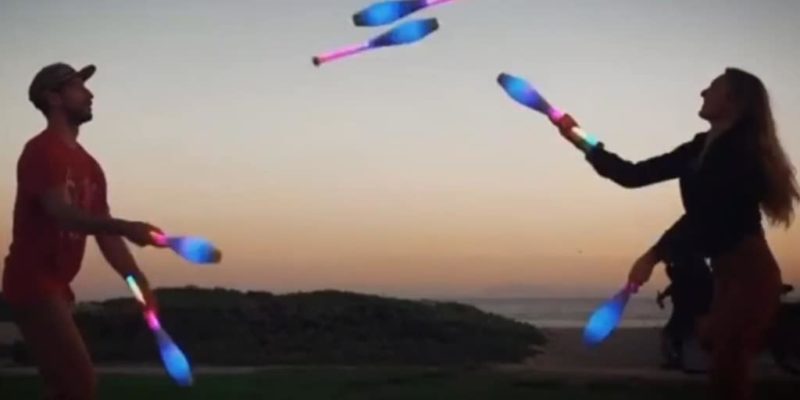 People tell stories and share a part of themselves through many different mediums, including performing arts. Performing art offers creators a way to embody art themselves. In other words, it uses the human body and its ability to create through movement. Other types of art, such as paintings and sculptures, are considered static, while the visual arts are dynamic.

A couple decided to pursue performing arts together and have mastered many different styles and techniques. Jessie Kat and her partner dance with fire, juggle, ride bikes, and more! Here is their inspiring story of how they create art through movement.

Jessie has been acting since she was a child and has continually evolved in her art ever since.

“I found the hula hoop about 6 or 7 years ago. I had the opportunity to take some classes with a wonderful friend of mine named Katelyn Carano, ”said Jessie. “So, I met someone who took me into the world of fire dancing, and that really expanded my art.”

She says that the fire dance includes so many different accessories and things that you can do with them. The fire dance actually began thousands of years ago in ancient Polynesia. Historians believe that the Maori people of New Zealand created Poi, a Maori word for “ball on a string.” Maori warriors originally used poi as a tool to train for battle or hunt.

Balancing the balls helped them win wrist strength and flexibility to use different hunting tools or weapons. Finally, the Maori used the balls for various types of performing arts. The poi was made of flax fibers called muka and half the stem of the raupo. Modern poi is made of synthetic fibers of various bright colors.

However, the art of setting poi balls on fire did not occur until the mid-20th century. Samoans used poi in a traditional knife dance called ailao. This showed the strength and capabilities of the Samoan warrior in battle and was mainly performed in ceremonial processions of daughters and chiefs. Later, the Samoan people started using machetes instead of knives in fire dances.

In 1946, a Samoan-American named Uluao Letuli began setting knives on fire after attending the Shriner Convention in San Francisco. There, he saw the performance of a baton beater and a fire eater, and decided to set his own knife on fire. From there, this became a common ritual for the Samoans, and the Polynesian people began setting fire to all their ceremonial accessories. In the 1950s, the first fire poi performances, known as luaus, began in Hawaii.

The fire poi are made of chains and Kevlar wicks at each end and are filled with cotton, which easily absorbs fuel. Most artists use kerosene due to its low combustion temperature. The fire poi and the knife have become other types of instruments such as fire fans, umbrellas, balls, and whips.

In the United States, fire dancing didn’t become popular until the early 1990s in places that naturally drew crowds for performing arts. Raves, beach parties, concerts, and festivals have generally been popular events for fire artists. A major attraction for artists of all stripes is the famous Burning Man festival. There are many other types of events like these throughout the year that attract artists from all over the world.

The couple showcase their performing arts across the country to large crowds.

Jessie and Kyle perform at many of these festivals and gatherings, showcasing their unique abilities together. Kyle, also known as “Flowstyle Kyle,” is a multi-accessory juggling performer and instructor. He started in the performing arts in 2015, and his knowledge and experience have continued to grow. He began teaching people to juggle and dance with fire in 2016, and began traveling to festivals in 2018.

Kyle and his partner have their own unique style that makes them stand out from the crowd. They use different types of accessories in their performances, such as electric unicycles, LED lights, rings, and fire. They have put in hundreds of hours and dedication to perfecting their craft for people to enjoy. They both want to spread their love of performing art wherever they go and help others learn this beautiful art form.

“I want to keep moving and growing and loving,” says Jessie. “I want to continue make people smile, make children laugh, inspire others. “

“It is quite difficult to stay motivated during these difficult times, and I feel very fortunate to have a partner (whose name is Flowstyle Kyle) who has really pushed me to get better and better every day and teaches me something new every day. hour. Our goal for the future is to keep juggling and riding electric unicycle. We are currently creating an act together that we can’t wait to share with the world. “

We can’t wait to see what types of performing art they come up with!

If you want to see more of her performing art, you can follow Jessie on Instagram here. Kyle also has an Instagram page, and the couple share a page called Electric Jugglers for their unicycle art.

There are so many different types of art in the world, from music to painting to acting. Art helps people to translate feelings and thoughts into a type of expression that people can identify with. For example, music helps people relate to certain emotions or experiences that an artist portrays with his lyrics. In the same way, performing art allows people to connect by seeing others express themselves with fluid movements and accessories.

Art is all about expression: making our inner world visible in some way so that others can understand it. Jessie and Kyle have honed their skills over the years, teaching them to thousands more. They frequently travel to festivals to share your talentsand they have a lot more tricks up their sleeve. They really love performing arts, and if you go to festivals, you might be lucky enough to see them perform.

10 Ways People Provoke Their Partner Without Realizing It