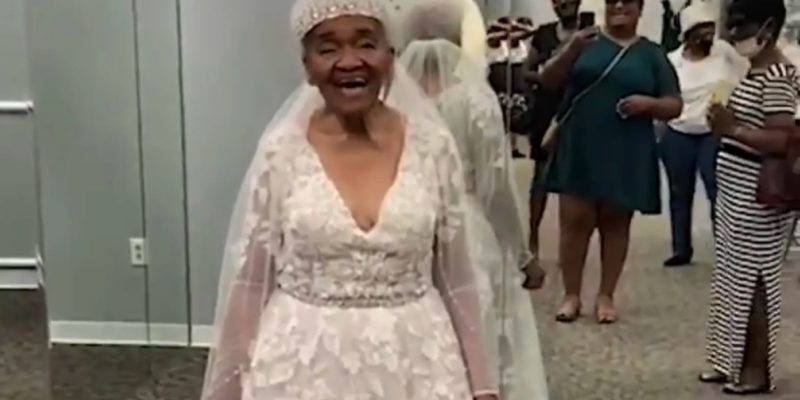 
A deferred dream doesn’t necessarily mean a denied dream, even if it takes seven decades to come true.

In 1952, Martha and Lehman Tucker became husband and wife. Although the marriage was a true romance, the wedding was missing an element that the bride would have loved to have: a traditional white lace wedding dress.

But in those days, Martha was unable to shop at the racially segregated bridal shops in Birmingham, Alabama.

For years, Martha kept those memories to herself, but recently the 94-year-old revealed her hopes to her granddaughter, Angela Strozier.

Knowing the sacrifices that black women of Martha’s generation faced from day to day, denying themselves many of the customs, courtesies, and basic rights in life that others simply took for granted, Strozier decided it was time to make her grandmother’s wish come true. for the wedding dress.

This past July, after an enriching brunch and preparatory makeup session, the bridal party headed to David’s Bridal in Hoover, Alabama, where the wedding dress Martha had always dreamed of, complete with long lace sleeves , matching veil and even a sassy and charming thigh-length lace garter awaited her.

CHECK: See a couple adorably recreate their wedding album 50 years later, in the same church in the same dress

“Happy doesn’t really paint the picture of how this made me feel,” Strozier added. “My grandmother has always been a giver, so being able to finally bring her an experience so dear to her is priceless. Happy is falling short. “

Sadly, Lehman Tucker passed away in 1975. On the day she married him, Martha promised herself that one day she would wear the dress worthy of those vows.

MORE: Muddy bride sacrifices dress to give birth to calf during wedding reception

Although it took him 70 years, it is a promise that he kept, and if there is a life after death, we are sure that his loving boyfriend was smiling at his beautiful girlfriend when he finally did.

(GET TOGETHER Martha in the GMA video below.)

PROMISE to share more good news with your friends …

Rising from the Fire | DailyGood