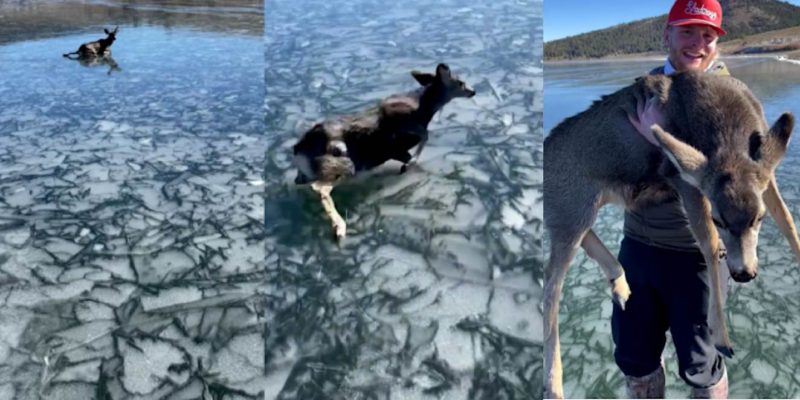 
Two men were on a winter fishing day when they came across a frantic baby deer that was trapped in a frozen lake. From there, a daring rescue on ice began.

Bransen Jackson and his friend saw the fawn trying and failing to stand on the slippery surface of Utah’s Panguitch Lake.

Jackson said to his friend, “Dude, that’s a deer!” We have to go save him, of course. “

The couple said 2KUTV News they began to carefully walk on the thin ice. At one point, Jackson’s friend’s boot broke. That was a shock to the nerves, but they decided they couldn’t just let the young mule deer just sit there.

When they finally got to the fawn, Jackson told 2KUTV, “I picked it up and it was super calm, super docile, like it understood that it’s okay, these guys are going to try to help me.”

CHECK OUT: This dog was lost in the woods for 10 days with a winter storm on the way, but a drone saved the day

Then the ice began to melt under the weight of the trio. They ran to shore, the deer in Jackson’s arms. While at first the fawn had trouble standing and walking on the rocky ground, what happened next is beautiful.

SHARE the story of The Fawn with your friends …