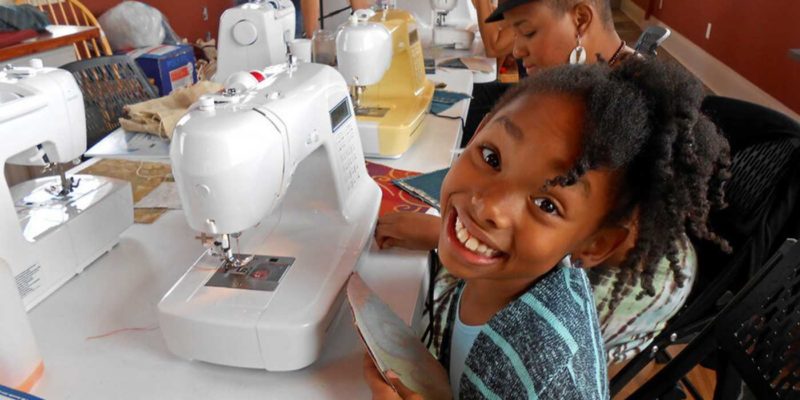 
Sewing is a trade that has been passed down through the centuries from mother to daughter and from father to son. Traditionally, it has also served as one of the few steady sources of income for women, especially the marginalized.

Margaret Jankowski learned to sew from her mother. As an adult, more of a hobby than a vocation, it wasn’t something she pursued full time, but she enjoyed it enough to teach sewing classes and create clothes for her first child.

In 2004, in the wake of the tsunami that devastated Sri Lanka, the story of a woman whose dream of becoming a tailor was thwarted after spending years saving to buy a sewing machine struck a chord that resonated with Jankowski.

“I could easily make a living without my sewing machine,” Jankowski told the Christian Science Monitor. “That was not true for this woman.”

Inspired, Jankowski made a spontaneous decision to find a way to bring some machines to Sri Lanka. His original thought was to just grab some used machines and ship them, but when he described his plans on the local news, the project took on a life of its own and donated machines began to arrive.

In 2005, the first shipment of 25 boxes containing toys, medical supplies, fabrics and a sewing machine was distributed to five orphanages in India and Sri Lanka. In addition to creating clothes, the machines were used as learning tools to teach children an occupation that they could put to good use later in life.

Since then, The Sewing Machine Project has relocated 3,350 sewing machines to recipients facing a variety of socio-economic challenges resulting from a variety of causes including warfare, natural disasters, and generational poverty.

After Hurricane Katrina, hundreds of machines were delivered to New Orleans Mardi Gras costume manufacturers. They have also found their way to Guatemala, Kosovo and closer to home in training facilities for immigrants and transition centers for women trying to overcome drug addiction.

As valuable as learning to sew it can be a source of livelihood, whether you are sewing to make something new or repair something old, creating something beautiful or something strictly utilitarian, being able to say, “I did this!” it’s a life-changing affirmation of self-worth.

Nowhere is that more true than in a pilot program in Rankin County, Mississippi, where SMP serves.

Inmates at the Central Mississippi Correctional Center began producing backpacks filled with reusable sanitary pads and underwear for girls in countries that were often unable to attend school due to a lack of sanitary supplies.

Since its inception, Principal Renee Smith has seen a definite change in the attitudes of participating inmates. “They know they are making a difference in someone else’s life,” he told CSM. “For me that is huge.”

The Sewing Machine Project, which is based in Madison, Wisconsin, accepts sewing machines of all brands. The only caveat is that they must be in working order. The Brother Sewing Machine Company recently donated 500 machines, 25 of which went to Zaman International, a Detroit-area nonprofit that serves underserved women and children, many of whom are immigrants and refugees.

MORE: A 13-year-old girl has been sewing hundreds of bow ties to help shelter pets be adopted

Jankowski currently receives 10-15 emails each week from international groups looking to receive sewing machines. Having started the show almost on a whim, I initially had no idea that the demand would be huge. Unfortunately, he says, the funds are not available to supply all who request it at this time, but he hopes that in the future the program can be expanded to meet the growing need.

As with many charitable programs, the parameters of the COVID-19 pandemic have forced a change in the way The Sewing Machine Project operates its outreach. But here, Jankowski is especially hopeful.

“One of the many gifts I have received from leading the Sewing Machine Project is the opportunity to see not only the need that exists around us, but also the creative ways that people and organizations work to address that need. “he said in the High School Website.

“Resilience, leaning and swaying in the face of challenge, appears everywhere. We adapt and support each other. Together all of us are working to meet the needs of those who can benefit from the healing power of sewing. “

And while the transition may not be seamless, the Sewing Machine Project plans to continue its mission to make the world a better place, one stitch at a time.