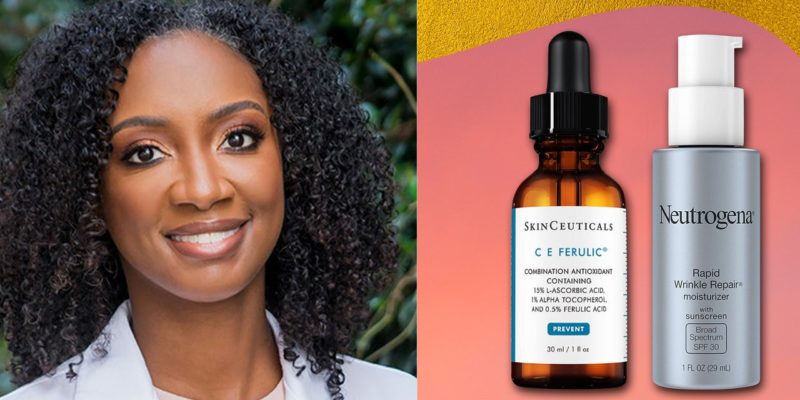 She kicks off her day off by cleansing with PCA’s Pigment Bar, which contains a blend of kojic acid, vitamin C, and azelaic acid to brighten skin. “I find it gentle enough to be used in the morning and I love that it helps to fight hyperpigmentation, which is one of my major struggles,” says Henry, who adds that she often uses a Buf Puf with it for additional gentle exfoliation.

Next, Henry reaches for a product lauded by beauty editors and skin experts alike: Biologique Recherché’s Lotion P50. “It exfoliates and hydrates at the same time, helping to gently improve my skin texture and reduce the appearance of my pores,” she says. For serum, her staple is SkinMedica’s Lytetra, which is formulated with tranexamic acid — one of her favorite ingredients for fading discoloration. “It’s great at fighting pesky hyperpigmentation,” she says.

SkinBetter Science’s Trio Rebalancing Treatment is her go-to moisturizer because it’s lightweight and smooths the skin. “It moisturizes like a cream with the consistency of a lotion, and it contains urea and ceramides to moisturize and improve skin texture,” says Henry, who follows this step with sunscreen. “CeraVe’s Ultralight Moisturizer with SPF 30 is quite moisturizing and blends into my dark skin, and I also like Supergoop’s Unseen Sunscreen SPF 40, which is completely transparent,” she says. (Henry has partnered with Cerave in the past.)

Henry ends her day with another thorough cleanse — this time using SkinMedica’s AHA/BHA Exfoliating Cleanser for a deeper clean. “It removes the dirt, oil, environmental pollutants, and debris that accumulate over the course of the day,” she says. She then tones again with P50 before applying Alastin’s Renewal Retinol. “This is a great non-irritating formula that softens fine lines and wrinkles, reduces acne, and fights hyperpigmentation with minimal risk of inflammation,” says Henry.

Finally, before hopping into bed, she slathers on SkinCeuticals’ Triple Lipid Restore, a thick moisturizer that she says helps to repair and restore her skin while she sleeps.

To keep the skin on her body feeling soft and hydrated, Henry uses a drugstore classic: CeraVe’s Moisturizing Cream, as it’s packed with ceramides that retain moisture in the skin. It also contains hyaluronic acid for added hydration.

As far as routines go, Carlos A. Charles is about as bare-bones as it gets. “My routine looks like this: In the morning, I wash with a gentle cleanser, such as CeraVe Hydrating Cleanser, followed by a generous layer of EltaMD UV Clear, which doubles as both my sun protection and moisturizer,” he says. Charles adds that sometimes he’ll also use a vitamin C serum to ward off free-radical damage, which helps with his hyperpigmentation. Lately, he’s been using — wait for it — SkinCeuticals CE Ferulic. Anyone surprised?

In the evening, Charles says, he sometimes swaps out CeraVe’s original Hydrating Cleanser for its foaming option, as he says it works better at removing the dirt and grime from the day. “Then I moisturize with CeraVe PM Face Moisturizer, and twice a week I’ll use a gentle retinoid cream on top to assist with cell turnover and collagen production,” he says. “I usually go with the tretinoin 0.025 percent cream.”

Charles says he always, always uses a fragrance-free soap on his body (such as Dove or Aveeno) and makes sure to apply a generous amount of moisturizer from head to toe right after bathing.

25 Black Dermatologists Around the US | Melanin Edit