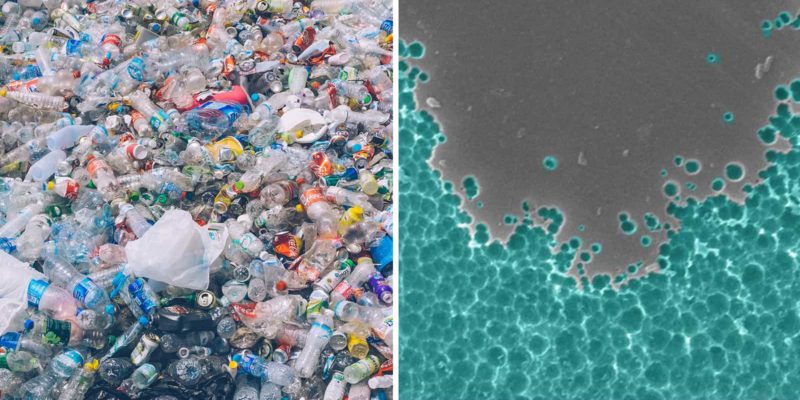 
Scientists have recently created a “super enzyme” that can break down plastic in a matter of days. In fact, it breaks down plastic up to six times faster than an enzyme they had previously created. The team of scientists at the University of Portsmouth redesigned a plastic-feeding enzyme called PETase. To speed up the process of ingesting plastic, they combined it with the new enzyme.

The superenzyme could help provide a simple solution for recycling polyethylene terephthalate (PET), the most common thermoplastic used in single use plastic bottles, rugs and clothes. While cheap to produce, it takes hundreds of years to break down in the environment.

However, PETase can break it down in just a few days.

Professor John McGeehan, co-lead author and director of the Center for Enzyme Innovation at the University of Portsmouth, helped develop PETase in 2018. Together with other scientists, he created the enzyme completely by accident while trying to mutate it in a laboratory. The team hoped that the unexpected find would finally solve the plastic pollution crisis.

They engineered the natural PETase enzyme to break down PET 20% faster, but the new superzyme offers even better results. McGeehan told CNN which works quite well for breaking down plastic, but still needs adjustments for commercial use.

However, scientists will continue to conduct experiments to fine-tune the process. Successful developments could lead to recycling of existing PET rather than digging up more fossil fuels for plastic production. This would result in “huge energy savings,” according to McGeehan.

The superzyme combines PETase and MHETase, an enzyme found in bacteria that eat plastic. The combination of these enzymes causes PET to break down twice as fast as PETase alone. However, the fusion of the two enzymes created an even faster decomposition process, increasing the speed three times.

The scientists who originally designed PETase participated in the study. Included Professor John McGeehan from the Center for Enzyme Innovation and Dr. Gregg Beckham, Senior Researcher at the National Renewable Energy Laboratory (NREL) in the US. Enzyme innovation center takes enzymes from the natural environment and manipulates them to create new enzymes using synthetic biology.

The newspaper Proceedings of the National Academy of Sciences of the United States of America published the full study.

Professor McGeehan said: “Gregg and I were chatting about how PETase attacks the surface of plastics and MHETase cuts things even further, so it seemed natural to see if we could use them together, mimicking what happens in nature.

“Our first experiments showed that they actually worked better together, so we decided to try to link them physically, like two Pac-men joined by a piece of string. It took a great deal of work on both sides of the Atlantic, but it was worth the effort; We were delighted to see that our new chimeric enzyme is up to three times faster than separate naturally-evolving enzymes, opening up new avenues for further improvements. . “

The original discovery of the PETase enzyme provided hope that a solution to the plastic pollution The crisis was on the horizon. However, PETase alone cannot work fast enough to devour the mountains of PET bottles scattered around the world. By combining it with the MHETase enzyme, scientists have come even closer to finding a solution for plastic waste.

How the ‘superzyme’ was created

Both MHETase and PETase come from a bacteria that feed on PET plastic called Ideonella Sakaiensis. The fusion of the enzymes allows them to digest the plastic at a much faster rate. The plastic is then returned to its original building blocks, allowing for endless reuse and recycling. This would dramatically reduce our dependence on fossil fuels like oil and gas.

To develop the superzyme, Professor McGeehan used the Diamond light source in Oxfordshire, a device that uses intense X-ray beams 10 billion times brighter than the Sun. It acts like a microscope, capable of seeing individual atoms. This device helped the team map the molecular structure of the MHETase enzyme, giving them the blueprints to design the supercharged enzyme.

To do this, they essentially joined the DNA of the two enzymes to create a long chain. The biofuel industry often uses this technique to break down cellulases. However, McGeehan explained that the study marks the first in history to use enzymes to break the plastic.

This pioneering research involved scientific approaches, including structural, computational, biochemical, and bioinformatic. He provided information on the molecular structure and function of enzymes, which will help with further research. Perhaps in a few years we will see that the super enzyme will be incorporated into recycling efforts.

Other solutions to break down plastic in the environment

Plastic pollution affects all parts of the world and sadly, it looks like it will only get worse. A recent report from The Pew Charitable Trusts estimated that the volume of plastic in the oceans could nearly triple to 29 million metric tons per year by 2040. This total equates to a staggering 50 kilograms of plastic for every meter of coastline worldwide. However, the report said that an aggressive and wide-ranging recycling strategy could reduce plastic pollution by 31-45%.

In April 2020, the French recycling company Carbios published a study on its PET-eating enzyme. They will test it at a demonstration plant near the city of Lyon sometime this year. The company expects to adopt industrial-scale recycling within five years.

The wax worm, a member of the caterpillars family, could also provide a solution to the problem of plastic debris. It can eat up many plastics, including polyethylene, one of the most widespread plastics that pollutes waterways and landfills. Worms have certain gut bacteria that can effectively digest plastic.

Finding a way to clean up the plastics that litter the planet is one of the most pressing issues of modern times. Fortunately, it appears that scientists are on the right track. The new superzyme they have created can help reduce plastic waste. If they can scale the process, maybe we can have a plastic-free world sooner than we think.

Your Guide to Getting a Brazilian Wax for the First Time

Good Question: How Many Sets Should I Do to Build Muscle?