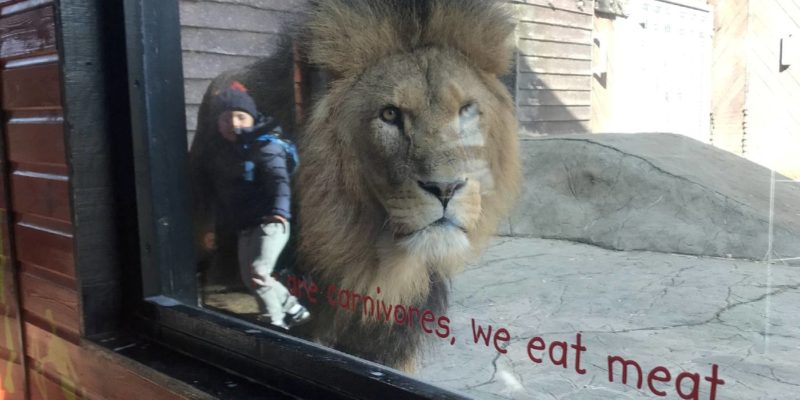 
A trick of the light can have a big impact. Thanks to an optical illusion, a mother took a photo of her four-year-old son apparently inside the enclosure of a big cat.

Little Noah Moore was mesmerized by a giant cat when his mother Shanice took him to Colchester Zoo in Essex, England, last week.

28-year-old Shanice was taking photos of her son as he gazed excitedly at Bailey, the lion lying against the glass.

But it was only when Shanice and her partner Jake Moore were returning home that he looked at his photos again … and saw Noah looking dangerously close to Bailey in one of his photos.

The image shows only Noah’s reflection in the glass of the enclosure, making it appear that the young man is standing inside, huddled against the lion’s bushy mane.

To make the photo even more fun, some perfect words are written at the bottom of the glass: “We eat meat.”

Shanice said she only intended to take a photo of the lion Bailey, and she hadn’t even realized at the time that Noah was reflected in the image.

The mother, who is expecting her second child next month, said: “I couldn’t believe it when I saw the photo. I shared it on Facebook after I saw it, and people asked me if I had done some Photoshop on it. But I am silly with technology; I don’t even think that with Photoshop I could have done a better job than I did.

“The zoo said that it is quite rare for that particular lion to approach the window like that. It was incredible “.

Shanice said the moment was made very special because of how her autistic son reacted when he saw the lion.

WATCH: This epic pirate cat has spent his entire life sailing the ocean

She said: “He’s very autistic and doesn’t speak, so he’s never really involved with any of the animals on the few occasions we’ve been to the zoo.

“But this time, it was the first time he was really engaged at the zoo.

“He was staring at the lion for years, and since we have a pet cat at home, he actually said ‘kitty-kat’, which was amazing and very emotional for me. I think lions must be his new favorite animal. “

Shanice said she now has the photo framed. We hope it reminds you of a special time with Noah for a long time.

6 Reasons Why Children Should Know That Winning Isn’t Everything