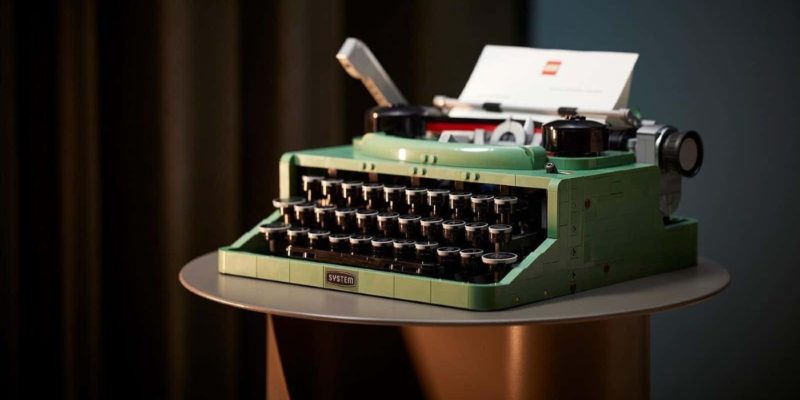 
The LEGO Group has revealed the new LEGO Ideas Typewriter Set, which is bound to delight seasoned letter writers and fans of all things old.

The LEGO Ideas Typewriter # 21327 is based on a contemporary typewriter model from a bygone era, including the one used by LEGO Group founder Ole Kirk Christiansen.

Intricately designed to reflect the function and feel of a classic typewriter, the typewriter features a central writing bar that rises each time a letter key is pressed, linked to the carriage that moves through the writing, as well as a roller can introduce paper.

MORE: He built his own prosthesis with LEGOS and hopes to provide affordable solutions for those who need a hand

In a fitting nod to the lost art of letter writing, the set also comes with a letter written and signed by Thomas Kirk Kristiansen, president of the LEGO Group and a member of the fourth generation of the family that still privately owns the business until today. today. .

The original concept for the typewriter came through the submission of LEGO fan Steve Guinness to the LEGO Ideas platform, a LEGO initiative that takes new ideas that have been imagined and voted on by fans and turns them into reality.

Commenting on his idea, Steve said: “I wanted to create something totally different from anything LEGO has ever made before and show that you can really do anything with LEGO. I bought an old typewriter for my research and then played with the bricks and the mechanism until I was satisfied with the design. I hope it brings nostalgia to adult fans like me, and awe and curiosity to younger fans who may never have seen a real typewriter! “

While the typewriter concept dates back to the early 18th century, Steve’s design and development by the LEGO design team captures the style cues of modern 20th century typewriters, which still have a cult following. currently.

Federico Begher, Vice President of Global Marketing for the LEGO Group, commented: “It’s not hard to see why the antique typewriter has such enduring appeal, and Steve’s incredible replica is a valuable LEGO Ideas success story. For many, escaping the world connected to the simplicity of the typewriter is an experience similar to the conscious process of building with LEGO bricks. Here we have a LEGO set that blends these two worlds to perfection and, like its real life counterparts, it is something that LEGO fans will be proud to display in their homes. “

RELATED: Boy With Autism’s Titanic LEGO replica is so impressive that it’s now on display at the Ship Museum

In the video below, LEGO designers Wes Talbott and James May discuss the set in detail, including all of its cool features.

Develop some positivity by sharing the story with your friends …