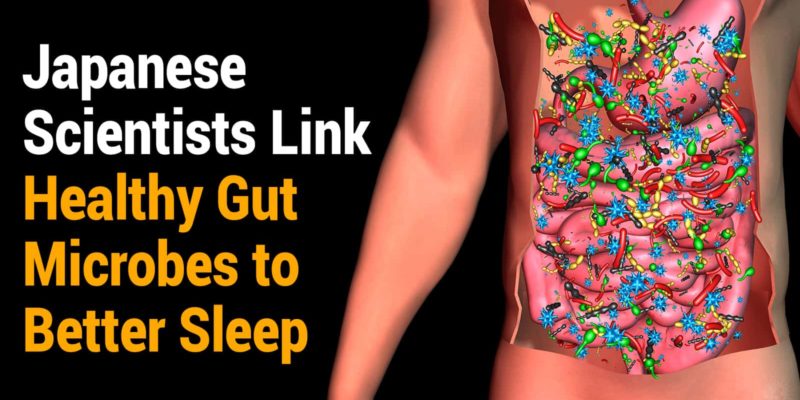 
A study from the University of Tsukuba in Japan revealed that people who have healthy gut microbes sleep better. With so many people suffering from insomnia around the world, this research could bring some relief. Many factors influence sleep, including stress levels, eating habits, and physical health, to name a few. However, the common link between all of them is the microbiome, which governs all the functions of the body.

All diseases can be traced to the intestine because 70% of our immune system It is manufactured here. This may explain our chronic disease epidemic, as many people today have poor gut bacteria due to various lifestyle factors. The study by Japanese scientists shows the importance of a healthy gut because it influences everything from our mood to sleep patterns.

About the study of gut microbes

In the study, the researchers used various antibiotics to deplete gut microbes in mice. They found that the metabolites in the gut differed in these mice compared to controls. Specifically, the metabolic pathways involved in the creation of neurotransmitters such as serotonin were disrupted. In addition, the mice showed abnormal sleep patterns and disturbances in their circadian rhythm. In particular, his REM sleep was disrupted; the mice appeared to be in and out of REM sleep quite frequently.

The study, led by Professor Masashi Yanagisawa in Japan, aims to show how well gut health affects our lives. Careful study in mice revealed how significantly gut microbes it can alter the intestines and affect behaviors such as sleep.

For the experiment, the researchers administered several potent antibiotics to a group of mice over a period of four weeks. This depleted his gut microbes. The researchers then compared the intestinal contents of these mice and the control group that ate the same diet. In the process of digestion, food is broken down into small pieces called metabolites.

What the study revealed about how gut microbes influence sleep

The team found striking differences between metabolites in mice without gut microbes and the control group.

Professor Yanagisawa said: “We found more than 200 metabolite differences between the groups of mice. Approximately 60 normal metabolites were missing in the mice with reduced microbiota, and the others differed in quantity, some more and some less than in the control mice.

Next, the team wanted to determine how metabolites act under normal conditions. Using metabolome set enrichment analysis, they found that antibiotics primarily affected biological pathways involved in neurotransmitter production. Brain cells use these molecules to communicate with each other.

In mice, the researchers found that their tryptophan-serotonin pathway had basically stopped working. While the mice are exhausted gut microbes they had more tryptophan than controls, they had almost no serotonin. This observation shows that when the intestine lacks important bacteria, tryptophan cannot be converted to serotonin. Additionally, the team found that the mice had low levels of vitamin B6 metabolites, which aid in the production of serotonin and dopamine.

The team then observed the mice’s sleep quality by using EEG to study brain activity. They found that mice with depleted microbiota had more REM and non-REM sleep at night than control mice. The mice also had less non-REM sleep during the day. While this would seem normal for humans, it shows a reversed circadian rhythm in mice, which are nocturnal animals.

Professor Yanagisawa suggested that the reduced levels of serotonin caused the sleep disorders. However, they still need to do more research to determine the exact mechanism behind this phenomenon.

“We found that the depletion of microbes removed serotonin in the gut and we know that serotonin levels in the brain can affect sleep / wake cycles,” he says. “Therefore, changing the microbes in the gut through diet modification has the potential to help those who have trouble sleeping.”

Other studies showing how healthy gut microbes can prevent insomnia

1. Having a healthy gut helps your neurotransmitters and hormones stay balanced, ensuring a good night’s sleep.

In fact, one study found that beneficial gut microbes It can reduce cortisol levels, which play a very important role in hormone production. Too much cortisol produces a hormonal imbalance, which can affect the quality and duration of sleep.

Additionally, a healthy gut ensures that your body produces adequate GABA, an amino acid that helps you sleep. Finally, since 90% of serotonin comes from our intestines, having good bacteria will help you relax at bedtime.

2. Melatonin levels They also play an important role in the quality of our sleep.

When our bodies have healthy levels of this hormone, our sleep and wake cycles are consistent. However, in our modern world, many people’s circadian rhythms have been disrupted due to a lack of sunlight. He too bright blue lights emitted by smartphones and computers deplete melatonin levels overnight. This could explain the rise in insomnia since the advent of mobile technology in the last 20 years.

To increase the body’s melatonin levels, it is important to eat foods that are high in tryptophan, as it is converted to serotonin. You can also take probiotics, as these increase melatonin levels increasing tryptophan in the body. People with low serotonin levels often have altered circadian rhythms due to an imbalance of melatonin.

Final thoughts: gut microbes play an important role in the quality of our sleep

Scientists have only just begun to discover the link between our gut microbiome and sleep disorders. Unsurprisingly, the mouse study showed that having an unhealthy gut caused sleep disturbances. The mice that had exhausted intestinal bacteria it had a reversed circadian rhythm, and we see it in humans today as well. Many people feel connected at night when they should start to feel sleepy after a long day at work.

However, by taking care of our gut bacteria and eating healthy food, we can start to sleep better. In general, you will want to avoid processed foods and eat whole foods to feed the good bacteria.

12 Behaviors That Reveal Someone Is an Impatient Person