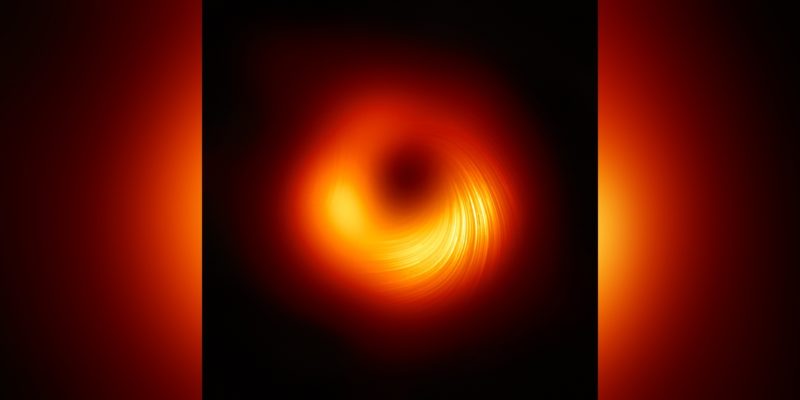 A new view of the region closest to the supermassive black hole at the center of the galaxy has shown important details of the magnetic fields near it, and hints at how powerful jets of material may originate in that region.

A worldwide team of astronomers using the Event Horizon Telescope (EHT) measured a signature of magnetic fields, called polarization, around the black hole. Polarization is the orientation of electric fields in light and radio waves and can indicate the presence and alignment of magnetic fields.

The new images allowed scientists to map magnetic field lines near the edge of Messier 87’s black hole (M87) and are the key to explaining how the black hole, 50 million light-years from Earth, can launch jets of energy. from its core.

The black hole at the center of M87 is more than 6 billion times more massive than the Sun. The material drawn inward forms a spinning disk, called an accretion disk, that closely orbits the black hole.

Most of the material from the disk falls into the black hole, but some surrounding particles escape and are ejected into space in jets that move almost at the speed of light.

“The recently released polarized images are key to understanding how the magnetic field allows the black hole to ‘eat’ matter and launch powerful jets,” said Andrew Chael, NASA Hubble Fellow at the Princeton Center for Theoretical Sciences and Initiative. Princeton Gravity in the United States

PLUS: Hawking’s 50-year-old mystery of falling into black holes has finally been solved

The scientists compared the new images showing the structure of the magnetic field just outside the black hole with computer simulations based on different theoretical models. They found that only models with strongly magnetized gas can explain what they are seeing on the event horizon.

CHECK OUT: The biggest explosion since ‘The Big Bang’ creates a black hole, according to science, should not exist

“The observations suggest that the magnetic fields at the edge of the black hole are strong enough to push back the hot gas and help it resist the pull of gravity. Only gas that slides through the field can spiral toward the event horizon, ”explained Jason Dexter, assistant professor at the University of Colorado Boulder and coordinator of the EHT Theory Working Group.

To make the new observations, the scientists linked eight telescopes around the world to create a virtual telescope the size of Earth, the EHT. The impressive resolution obtained with the EHT is equivalent to that required to measure the length of a credit card on the surface of the Moon.

RELATED: New ‘unprecedented’ photos of the Sun’s surface are being hailed as a landmark achievement for science

This resolution allowed the team to directly observe the black hole’s shadow and the ring of light that surrounds it, and the new image clearly shows that the ring is magnetized. The results are published in two papers in it Astrophysical journal letters.

As the EHT collaboration continues to work harder on what’s happening around us in space, we’ll be sure to bring you their latest findings.

A Morning Cup of Coffee Not Only Charges You Up, But the Leftovers Have Reinvigorated Forests