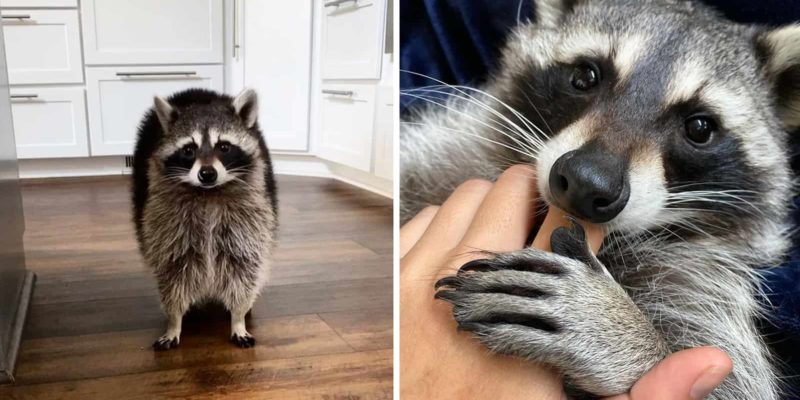 
While most people would probably never willingly own a raccoon, one family took in a stray dog ​​as their own. Bethany and her husband Russ noticed that a raccoon had fallen about 25 feet from a tree. He stood at the bottom yelling for his mother, who simply looked down from the branches above. They thought they would just leave the raccoon there and that Mom would come looking for it eventually.

“Well it’s been a couple hours and now it’s late at night and June is covered in ants, leaves and mulch,” Bethany said. “And she’s still screaming, and her mom is no longer in the tree.” So they did what anyone in their position would do.

The helpless raccoon was brought inside to warm her up, give her some fluids, and leave her nice and clean. They made sure to remove all the ants so they didn’t bite her.

“The next day, we put her outside again, but her mother was never seen again. And this is how we got to June! “

They named her after the month they found her at the foot of the tree. Not knowing what to do with her, they decided to simply adopt her into the family. They couldn’t free her without her mom since June was so young. If she was left alone outside, she could have been attacked by another wild animal.

They decided that leaving her with them was the best option. Apparently, this hadn’t been his first encounter with wild raccoons either. They both have experience as wildlife rehabilitators, so they knew how to handle June properly.

“We raised June like any of the other raccoons that we had raised before to encourage her to be wild, to be free and to set her free,” said Bethany. “The augmentation and rehabilitation went very well, but the release part did not go well.”

June seemed to enjoy the comforts of human life too much to return to the inhospitable nature. They thought that after a while, he would want to go out again and live like a normal raccoon. However, after four years, they still had the orphaned raccoon living in their home. At this point, they accepted her as a permanent member of the family.

Then they decided to add another furry friend to the family.

“We had June a little over a year and then we decided we wanted to have a dog for our family,” said Bethany. “Introducing Waffles, which is a Vizsla, in June.”

They seem to get along really well and even snuggle together for a nap on the couch. They hardly seem to notice their differences and act like the best animal friends.

“June and Waffles like to fight and play together; They’re always getting into trouble and it’s a lot of fun. They work together and tag the team, so they are double trouble. I really think June thinks she’s a person and Waffles thinks she’s a raccoon, ”says Bethany.

No matter how they see themselves, they love each other unconditionally and make a perfect team. They hang out all the time and it seems like they never want to be separated from each other.

Of course, Bethany says that they would have preferred to release June into the wild if it were possible. They know that raccoons need a life in the wild to thrive, but in this case, they saw no other option.

“If she could have been raised with other raccoons, June would not be here now. She would be in the wild, but it didn’t work out that way. “

Raising a raccoon is not for everyone!

Bethany loves having June as a pet, but warns others to adopt a raccoon. She says that raising a raccoon comes with many challenges and does not recommend that people raise them.

“I’m not advocating for people to keep raccoons as pets unless they know what they’re doing and have the time to spend,” she says. “So make sure you know what you’re getting into. The best option is to give it to a certified wildlife rehabilitator. “

After a few years of spreading the story about June & Waffles, Bethany and Russ wanted to make a bigger difference in some way. They decided to partner with animal rescue organizations to spread the word of animal rescue. They now have a shop with mugs, T-shirts and other items decorated with images of Waffles and June. Visit the Shop for a Cause page if you want to see your store and how you get paid back.

If you know of a shelter or organization in need, you can email them to nominate them for donations. Remember, every little bit counts!

Do you or someone you know have a pet raccoon? If so, we’d love to see photos or hear more about it in the comments!