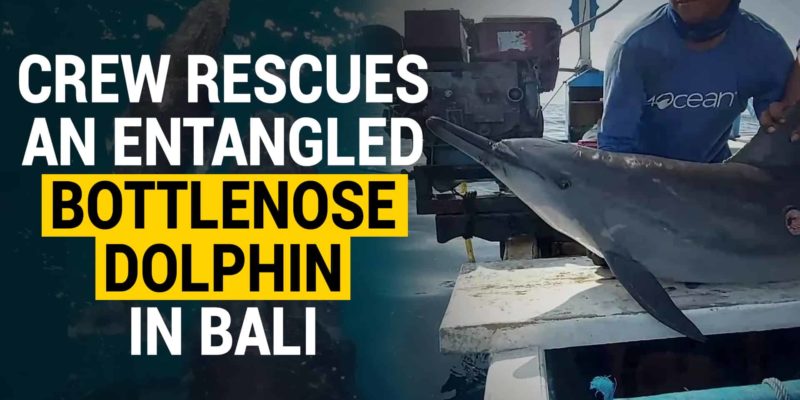 
Teams working for the environmental organization 4Ocean encountered a bottlenose dolphin in Bali during their shift one afternoon. 4ocean employs crews around the world to remove trash and plastic pollution from the oceans. Last November, the crew saw something unusual during a routine cleanup mission.

The crew had their cleanup crew ready to begin work off the Jembrana coast. Once they reached a patch of floating debris, they saw the bottlenose dolphin entangled in the debris. As they got closer, they soon realized that it was a life and death situation. The heavy debris kept dragging the dolphin underwater and it was hard to breathe.

“Our team in Bali, Indonesia, came across a bottlenose dolphin that was entangled in a fishing line on the brink of drowning. They quickly jumped into action and were able to free this dolphin from all tangled fishing line and release it safely into the ocean, ”said the CEO of 4ocean Alex Schulze said.

The bottlenose dolphin escaped thanks to the dedicated crew of 4ocean.

The desperate dolphin fought for his life with a tight fishing line around his mouth. While cleaning up the trash, the crew lifted the dolphin into their boat to help free it. They took a small pair of scissors to cut the lines wrapped around the dolphin’s mouth, body, and tail. The crew also removed several fishing hooks embedded in the animal’s body.

The bottlenose dolphin appeared to have cut off the fishing gear, but they were not severe enough to prevent it from swimming. The animal also had other injuries, probably caused by a shark, but it no longer existed. After removing the fishing line and ensuring that the dolphin’s injuries were not life-threatening, the crew returned it to the ocean. The team watched as the dolphin happily swam away, finally free from the fishing line’s grip.

“We are incredibly proud of our cleanup crews, not just in Bali, Indonesia, but around the world, which can have an impact on the amount of plastic in the ocean, as well as any animals that may be entangled in it. debris. “Alex said.

Plastic pollution and other debris affect all marine life

Upon releasing the bottlenose dolphin, the crew began cleaning up the plastic and other trash in the area. They determined that the fishing line and rods that entangled the dolphin were used to catch layur fish. The fishing line was about 82 feet long and weighed almost 7 pounds. It’s easy to see how that could have drowned the poor dolphin.

Discarded fishing gear accounts for around 10% of all plastic waste spread across the oceans. Marine animals like whales, dolphins, sea turtles, fish, seabirds and marine mammals are trapped in them every year. Unfortunately, not all of them escape. Only in 2018, ‘ghost fishing gear ‘ killed up to 650,000 marine animals worldwide.

WWF reports on others consequences of abandoned fishing gear:

In Bali, many species of dolphins receive special protection, so fishermen cannot hunt them. However, they can still get caught in abandoned gear, which happens quite often. Fortunately, Bali’s maritime authorities have taught local fishermen how to release entangled dolphins. While this can help save marine life, it will not completely solve the problem.

It is clear that the fishing industry needs stricter regulations to reduce plastic pollution from fishing gear. the World animal protection says governments should establish guidelines for marking fishing gear. In addition, laws requiring fishermen to recover and report lost gear should be better enforced.

The organization launched the Global Ghost Gear Initiative To achieve these objectives, which requires the collaboration of governments and organizations on the subject. Together, they will share data, resources and educational material in addition to coordinating search efforts. So far, 16 governments have joined the initiative, marking a big step in the right direction.

“This is a global problem that requires coordinated action around the world, which is why WWF urges governments and companies to support the establishment of a new UN global treaty on plastic pollution that sets global targets and binding targets both for the land as well as for companies. marine plastic pollution, which in turn can help drive strong local regulation of phantom equipment. We must stop ghost teams from decimating marine life and drowning the ocean we all depend on once and for all. “

Hopefully, governments around the world will join the effort to enforce stricter fishing laws. Ensuring that fishing operations clean their gear will have a positive impact on both the oceans and marine life.

While working in Bali, a 4ocean crew saw a bottlenose dolphin entangled in fishing lines. They immediately sprang into action, using scissors and a knife to release the dolphin. The crew were grateful to have helped the beautiful creature, but not all animals are so lucky.

Hundreds of thousands of marine life die each year from becoming entangled in fishing debris. ‘Ghost fishing gear’ also damages their habitat and makes it difficult to access ecosystems. Environmental organizations have called on governments to enforce stricter laws regarding fishing gear. Hopefully this will make commercial fishermen clean up and make the oceans safer for marine animals.