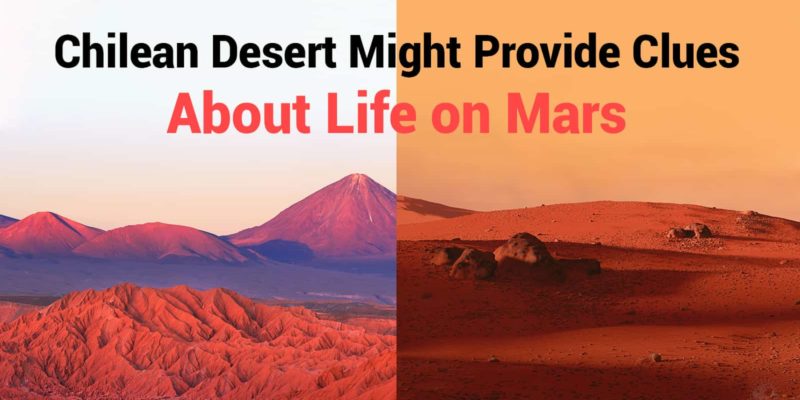 
Research funded by the European Research Council reveals that the Chilean desert could contain clues to life on Mars. Scientists have found various microbes in layers of shallow, clay-rich soil in Chile’s Atacama Desert. Because this dry environment bears a striking resemblance to Mars, scientists believe that microorganisms may also exist beneath the surface of Mars. Future rover or landing craft missions could easily detect any signs of life beneath the dry surface.

The discovery in Chile

In the arid environment of the Chilean desert, the researchers discovered layers of moist clay about 12 inches below the surface. They believe this could also offer a glimpse into life on Mars.

“Clays are inhabited by microorganisms,” said co-author Alberto G. Fairén, a visiting scientist at the Department of Astronomy. “Our discovery suggests that something similar may have occurred billions of years ago, or may still be occurring, on Mars.”

If microbes previously existed on Mars, scientists would likely find their preserved biomarkers there, Fairén said. “If the microbes still exist today,” he said, “the last possible Martian life may still be resting there.”

Mars will send rovers to its surface shortly to search for signs of life. In February 2021, NASA’s Perseverance rover will land, and the European Rosalind Franklin rover will arrive in 2023. Both missions aim to detect microbial biomarkers in the clay below the surface.

“This document helps to guide the search,” said Fairén, “to inform where we should look and what instruments to use in the search for life.”

In the Chilean desert, microbial life below the ground had not been previously reported. However, in the Yungay desert region, scientists found that at least 30 microbial species inhabit the clay layer. Species include metabolically active bacteria and archaea (single-celled organisms), which survive in salt-rich soil. Scientists believe that this discovery supports the idea that Mars could have had a similar environment, especially in its first billion years.

“That is why clays are important,” Fairén said. “They conserve organic compounds and biomarkers very well, and they are abundant on Mars.”

Last year, findings published in Frontiers in microbiology revealed that subsurface soil samples contained unusual microbes. A robotic rover deployed in the Atacama desert in Chile collected these soil samples during a test mission. Their goal was to detect signs of life. The researchers found highly specialized microbes scattered in patches in the soil, which they believe happened for a number of reasons. According to the researchers, the scarcity of water and nutrients, along with the chemistry of the soil, contribute to the distribution pattern of the microbes.

These findings will also aid in the quest to detect signs of life on Mars in the future.

“We have shown that a robotic rover can reclaim underground soil in the most Mars-like desert on Earth,” says research leader Stephen Pointing, a professor at Yale-NUS College, Singapore. “This is important because most scientists agree that any life on Mars would have to occur below the surface to escape the harsh conditions on the surface where high radiation, low temperature, and a lack of water cause life is unlikely ”.

He says that the microbes they found have adapted to high levels of salt. Those results are similar to what you would expect on the soil of Mars. The microbes discovered in the Chilean desert differ greatly from those previously found in desert environments. On upcoming rover missions to Mars, they will drill below the surface for the first time to look for signs of life. Scientists test the technology in Chile to ensure the success of these future missions.

“The core of the Atacama desert in Chile is arid, experiencing decades without rain. It has a high exposure to ultraviolet radiation on the surface and is made up of very salty soil. It is the closest match we have on Earth to Mars, which makes it good for testing simulated missions to this planet, ”Pointing argues.

Microbes found in patches in the desert.

A self-contained robotic drill and sampling device designed by the Carnegie-Mellon Robotics Institute recovered samples 80 cm from the ground. The sediment samples come from the Atacama desert; the researchers compared them to some they had recovered by hand. Using DNA sequencing, they discovered similarities in both samples, indicating a successful mission. However, the samples showed that the microbes had an uneven distribution, demonstrating the difficulty of surviving in a harsh environment.

“These results confirm a basic ecological rule that microbial life is irregular in the most extreme habitats on Earth, suggesting that past or present life on other planets may also exhibit irregularities,” explain study co-authors Nathalie Cabrol and Kim Warren-Rhodes of The SETI. Institute. “While this will make detection more challenging, our findings provide potential cues to guide exploration of Life on mars, demonstrating that it is possible to detect life with intelligent robotic search and sampling strategies “.

Final thoughts on how further studies can help us understand Mars

Pointing says they will drill even more in the future. This depth will allow them to see how deep the surface microbes can survive.

“The missions to Mars expect to drill down to about 2 meters, so having an Earth-based comparison will help identify potential problems and interpret the results once the rovers are deployed there. Ecological studies that help us predict habitable areas for microbial communities in the most extreme environments on Earth will also be critical to finding life on other planets. “

In the coming years, the missions to mars Hopefully it will be successful and help us find evidence of past or present life. Advancing technology helps tremendously in this endeavor. Therefore, we are likely to see great discoveries about life on other planets.