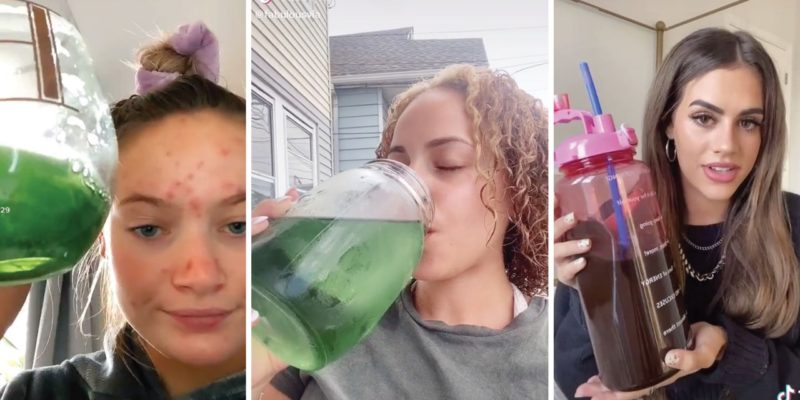 “Taking it back to high school,” says Dhaval G. Bhanusali, a board-certified dermatologist based in New York City. “Chlorophyll is an important mediator in photosynthesis, which is the process by which plants convert sunlight energy to chemical energy.”

As far as its potential skin-care perks, board-certified dermatologist Purvisha Patel breaks it down for us. “Chlorophyll is high in vitamins C, A, E, and K, and it has antioxidant properties,” says Patel, who is based in Germantown, Tennessee. This means it helps fight free radicals that occur when the skin is damaged or breaking down. “Liquid chlorophyll is helpful if you have inflammatory acne that is red and inflamed,” says Patel. Although, if you have deep, cystic acne, Patel does not suggest this antioxidant as “it may not be very helpful” in treating this type of acne.

According to cosmetic chemist Ginger King, liquid chlorophyll is usually a more concentrated form that we can get from leafy greens. To put it in perspective, Niket Sonpal, a gastroenterologist and internist based in New York City, breaks down the volume of spinach (and other leafy greens) one would need to ingest daily to retain its benefits compared to 100 to 300 milligrams of liquid chlorophyll drops (which is labeled as the recommended daily dose on most bottles of liquid chlorophyll).

According to Oregon State University, one cup of spinach has about 24 milligrams of chlorophyll, one cup of parsley has 19 milligrams. To receive the maximal benefits, you would need to ingest 10 cups [of spinach or parsley] each a day. While 10 cups of spinach may sound outrageous, let’s not forget what spinach looks like after a few minutes on the stove: close to nothing. With that in mind, 10 cups of spinach doesn’t seem impossible to eat in a day, though adding 10 to 16 drops of liquid chlorophyll to my water would be a great substitute for the days I’m not feeling like Popeye.

Although the trend seems to be drinking chlorophyll, it can also be used topically, which has its own benefits. “When using [chlorophyll] topically, there are two advantages: its antimicrobial ability, which can reduce swelling, and the green color, which can mask the redness from acne-prone skin, neutralizing its appearance,” King explains.

Both Patel and Bhanusali agree that when used topically, this form of chlorophyll is not as stable and can be less effective. “There are many variables when using it topically, including the breakdown of the ingredient and oxidization,” says Patel. “Taking it orally is a better mode of taking it.” That may explain the results shown in these TikTok videos, like @madibwebb‘s below.

“There are small trials that show benefits in treating acne,” says Bhanusali about the trending green drink. “While research is very limited, it is certainly promising.”

So, is drinking liquid chlorophyll the solution for your acne-prone skin? If you’re already eating (or juicing) your greens, there is no need to supplement your diet with this concentrated form of antioxidant. But it definitely couldn’t hurt.

Europe Will Open its Doors to Vaccinated American Tourists This Summer