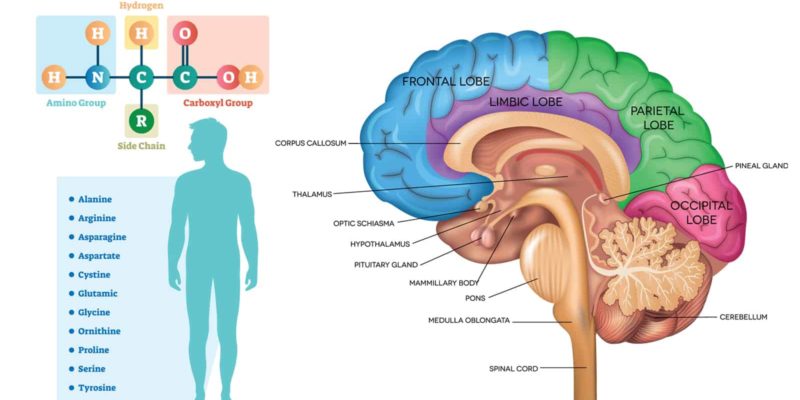 A clinical trial conducted by researchers at Baylor College of Medicine found that certain amino acids improve cognition in older adults. In the human pilot trial, the researchers examined the effect of GlyNAC supplementation. This is a combination of glycine and N-acetylcysteine, precursors to the natural antioxidant glutathione. They found that these amino acids could improve muscle strength and cognition and promote healthy aging in older adults.

Published in the magazine Clinical and translational medicine, the study found that older adults saw improvements in many age-related defects. Taking GlyNAC for 24 weeks, the study volunteers had better scores in the following areas:

“There is limited knowledge of why these defects occur in older humans, and effective interventions to reverse these defects are currently limited or non-existent,” said corresponding author, endocrinologist Dr. Rajagopal Sekhar, associate professor of medicine in the Section of Endocrinology, Diabetes and Metabolism at Baylor.

For the past two decades, Sekhar and his team have studied the reasons for age-related defects in humans and mice. They found that mitochondria, which drive biochemical reactions in cells, along with free radicals and glutathione, particularly affect aging.

How Mitochondrial Dysfunction Contributes to Aging

When mitochondria supply energy, they produce waste by-products called free radicals. These molecules are known to cause cancer by damaging cells, membranes, lipids, proteins, and DNA. Antioxidants like glutathione, the most common antioxidant in our body, work to eliminate these harmful free radicals. If these molecules are not neutralized, they can cause oxidative stress, thereby affecting the function of the mitochondria.

Researchers have observed that older people have consistently higher levels of oxidative stress and lower levels of glutathione than younger people. However, animal studies by Sekhar’s team have found that GlyNAC supplementation can increase glutathione while reducing oxidative stress. They also observed that mitochondrial function was totally improved in the aged mice taking GlyNAC.

“In previous work, we showed that supplementing HIV patients with GlyNAC ameliorated the multiple deficits associated with premature aging seen in those patients,” Sekhar said. “In this study, we wanted to understand the effects of GlyNAC supplementation on many age-associated defects in older adults.”

The study showed that GlyNAC improved cognition and other defects in aging.

“Correcting these aging characteristics is believed to be able to improve or reverse many age-related disorders and help people age in a healthier way,” Sekhar said. “However, we do not fully understand why these distinctive defects occur, and there are currently no solutions to correct even a single distinctive defect in aging.”

However, the results from Sekhar’s trial are promising, as GlyNAC supplementation for 24 weeks improved four of the nine aging defects. To learn more about how GlyNAC could help mitochondria recover fully, the team conducted a pilot clinical trial.

“We are very excited about the results,” said Sekhar. “After taking GlyNAC for 24 weeks, all of these defects in older adults improved and some reverted to the levels found in young adults.” The researchers found that the volunteers tolerated the supplement well throughout the study period. However, the benefits began to wane after the participants stopped taking the supplement.

“I am especially encouraged by the improvements in cognition and muscle strength, ”Sekhar said. “Alzheimer’s disease and mild cognitive impairment (MCI) are serious medical conditions that affect memory in older people and lead to dementia, and there are no effective solutions for these disorders. We are exploring the possibility that GlyNAC could help with these conditions by conducting two pilot randomized clinical trials to test whether GlyNAC supplementation could improve cognitive impairment-related defects in Alzheimer’s disease and MCI and possibly improve cognitive impairment. cognitive function “.

“The overall findings from the current study are very encouraging,” Sekhar said. “They suggest that GlyNAC supplementation could be a simple and viable method to promote and improve healthy aging in older adults. We call this the ‘Power of 3’ because we believe the combined benefits of glycine, NAC and glutathione are needed to achieve this widespread and far-reaching improvement. We have also completed a randomized clinical trial on GlyNAC supplementation versus placebo in older adults, and those results will be published soon. “

A groundbreaking study from Baylor College of Medicine found that older adults taking glycine and N-acetylcysteine ​​supplements had markedly improved health. These amino acids are the precursors of the natural antioxidant glutathione, the main ingredient in the supplement GlyNAC. The researchers noted that adults who took GlyNAC supplements for 24 weeks had better cognition along with many other improvements. These findings may lead to better treatments for age-related diseases in the future.

15 Behaviors That Can Help You Release Repressed Emotions