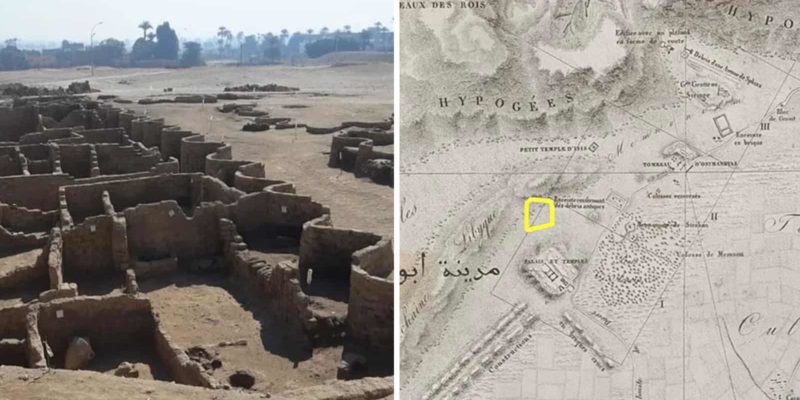 Late last year, archaeologists made a surprising discovery: a 3,000-year-old lost Egyptian city buried under the sand. They call it the second most important discovery since the opening of King Tut’s tomb in 1922. The team discovered this lost city near the world-famous Valley of the Kings.

Archaeologists began excavations about 300 miles south of Cairo, Egypt, in September 2020. It wasn’t long before the team discovered vast mud and brick formations zigzagging in all directions.

Renowned Egyptologist and former Minister of Antiquities Dr. Zahi Hawass announced the amazing discovery on facebook. He said the ruins of the lost city were discovered near Luxor, home of the ancient pharaohs.

Called “Dazzling Aten”, it is the most important ancient city in Egypt identified by archaeologists to date. The lost city dates back to the reign of Amenhotep III, one of the greatest rulers of Egypt throughout history. He founded the city and ruled Egypt together with his son Akhenaten from 1391 to 1353 BC. C. Hawass described the city as well preserved, with almost complete walls and “with rooms full of tools of daily life.”

“Many foreign missions searched for this city and never found it,” he said. “We started our work looking for the mortuary temple of Tutankhamun because the temples of Horemheb and Ay (two other powerful pharaohs during that time) were found in this area.”

Archaeologists They reveal that Aten was the most important administrative and industrial settlement on the west bank of Luxor during the Egyptian empire.

“The streets of the city are lined with houses, the walls of which are up to 10 feet high,” Hawass continued, “we can reveal that the city stretches west, up to the famous Deir el-Medina.”

Archaeologists discovered abundant treasures buried in the ruins of the city.

Since excavations began between the temples of Ramses III and Amenhotep III, archaeologists have found “tombs full of treasures.” They have found several neighborhoods, including a bakery equipped with ovens and pottery for storage in the southern area. They believe that the kitchen employed many workers who cared for important events, such as festivals.

The team also found evidence of larger, more organized residential and administrative districts protected by a zigzag wall. Since these districts had a single point of entry, archaeologists believe that city officials wanted to control access, keeping the area safe. Zigzag walls were not a common feature in ancient Egyptian architectural elements. They appeared mainly in structures towards the end of the 18th dynasty.

In another in the city, archaeologists found evidence of a workshop. One side of the workshop housed a production area for mud bricks used to build temples. Archaeologists also unearthed artifacts from artisans such as jewelers, brickmakers, and glassmakers. Evidence of his work appeared on clay bricks with the seal of Amenhotep III. These same bricks probably helped build several nearby temples, such as the Temple of Ramses II.

The team also discovered a container that held 2 gallons of dried or boiled meat (about 10 kg). It had the following inscribed on the outside: ‘Year 37, meat dressed for the third Heb Sed festival from the slaughterhouse in the Kha corral made by the butcher luwy.’

This priceless discovery reveals the names of two people who called the city home. Not only that, but it shows that the city dates back to the reign of King Amenhotep III and Akhenaten.

In addition, the excavation uncovered a clay seal with the inscription “gm pa Aton”, translated as “the domain of the dazzling Aten”. Hawass said that King Akhenaten named a temple in Karnak ‘Dazzling Aten’.

Archaeologists hope to discover more about this fascinating period in Egyptian history.

The northern part of the city revealed a cemetery, but the extent and conservation are not yet known to the team. The rock-cut stairs open a path to the rock-cut tombs that dot the cemetery. The tombs in the nearby Valley of the Kings have a similar construction.

Al Jazeera Reports that treasures such as those described by Hawass have already been discovered. Archaeologists have found items such as jewelry, pottery, and scarab pendants so far. Inscriptions on some artifacts tell a story about this critical period in history.

Betsy Brian, a professor of Egyptology at Johns Hopkins University, had this to say:

“The discovery of the Lost City will not only give us a rare glimpse into the life of the ancient Egyptians at the time when the Empire was richest, it will help shed light on one of the greatest mysteries in history: Why did Akhenaten and Nefertiti decide to move to Amarna “.

A fact about this period in Egypt still puzzles historians. Amenhotep III’s son Akhenaten moved the capital to Amarna after his death. Historians don’t know why this happened, but Hawass and other archaeologists hope that more excavations will reveal the answer. They also want to know if the city was repopulated when Tutankhamun later moved the capital to Thebes. The inscription on the pot containing dried meat read ‘Year 37’, a year before the citizens left Aten.

As archaeologists continue their excavations, we are likely to understand this fascinating period in Egyptian history much better. The discovery could also help revitalize Egypt’s tourism industry after years of political unrest.

A team of archaeologists recently discovered the 3,000-year-old city of Aten in ancient Egypt. So far, they have found evidence of residential districts, a bakery, a cemetery, and a sizeable workshop used for the production of bricks. Artifacts unearthed include pottery, scarab pendants, jewelry, and tools used in daily life. In the coming months, the team hopes to understand more about the events that unfolded 3,500 years ago.

The ongoing excavations could perhaps renew tourism in Egypt, as recent events have deterred visitors. The unexpected discovery makes history and gives us a glimpse of life in ancient Egypt.