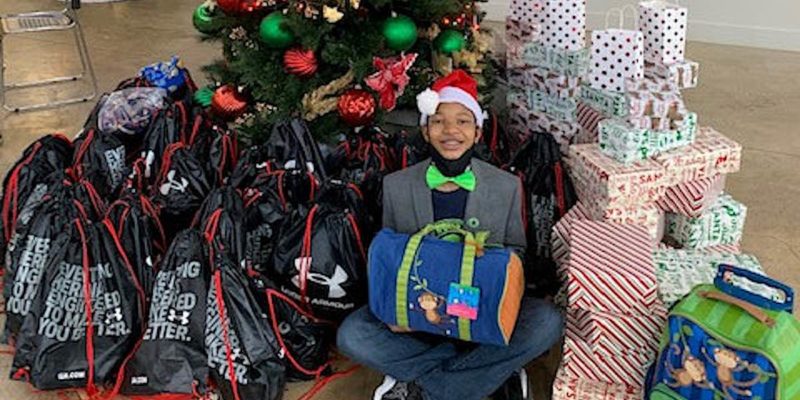 
A young teenager in Texas became the secret Santa Claus to 61 homeless children, and this year showered them with Christmas presents.

Jaxson Turner raised $ 5,900 through GoFundMe and social media to provide all of The Samaritan Inn’s children with new slippers, coats, socks, toys, and a hot meal for the holidays.

“I think we need to help them because many families during this pandemic are losing their jobs or their homes and moms are already worried about being homeless,” Jaxson said.

“Why should they worry about Christmas for their children too?”

This was the third year the 13-year-old held the Christmas event for the shelter in McKinney, Texas, under his non-profit organization called You are never too young to care (N2Y2C).

After Jaxson began collecting donations on October 1, he held his big giveaway party in December, serving a dinner for all the families where he served Chick-fil-A, Pizza Hut, macaroni, chicken nuggets, and cookies.

“Some people were crying,” Jaxson said of the families that night.

RELATED: 14-year-old girl wins $ 25,000 for scientific breakthrough that could lead to a cure for COVID-19

“One of the families with four children and a mother let me know that her children had never received new shoes before.”

Jaxson founded N2Y2C three years ago on his birthday.

“My mom kept asking me what I wanted to do for my birthday and that’s when I decided I wanted to feed the homeless,” she said.

“I always saw homeless families on the street asking for food and I thought that no family should be left without an Easter dinner.”

WATCH: Little Boy Gets His Own Garbage Truck Parade From The Local Garbage Company And It’s The Best Birthday Ever

WATCH: Tennessee Teen raises thousands of dollars for food banks by making and selling its own vanilla