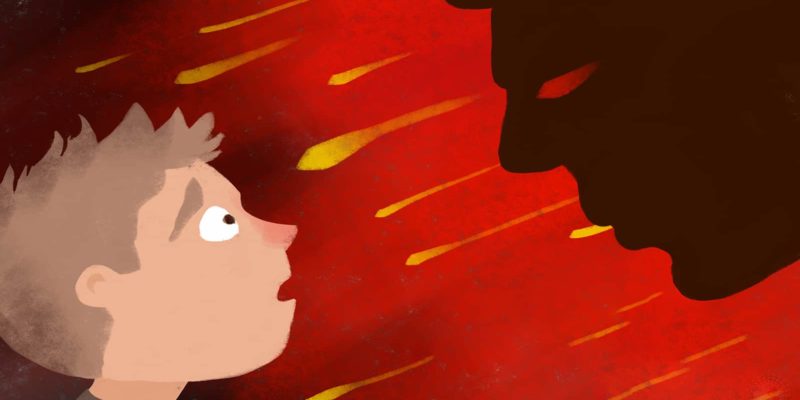 Children tend to imitate the behavior of those around them or react negatively to it. This being the case, you should consider whether the people in your child’s life are a negative influence.

You don’t want your child to learn bad habits and you don’t want their behavior to be negatively affected. To prevent these things from happening, you need to be aware of the actions that reveal that someone is a negative influence.

With teenagers, it is easier to recognize bad influences than with younger children. However, you can recognize the signs long before adolescence. Negative behavior can show up in children of all ages, including young children.

It is important to pay attention to the behavior of those who spend time with your child. Remember that some adults can be a negative influence in your son as well.

1. They don’t follow your rules for your home or your child

When someone in your home doesn’t follow your rules, your child could break them too. This applies to both adults and children. Your child is observing the behavior of everyone around him and will begin to take notice of his actions.

When your child has a friend, make sure your house rules are clear. If the friend is still not following the rules, remind them that it is not an option. Don’t relax to make things less tense because you set a bad example.

If an adult doesn’t follow the rules, tell him privately that he is setting a bad example. Most adults will get the hint, and those who don’t shouldn’t come back.

It could even be a problem if the bad influence is not physically present in your home as well. Be on the lookout for those who approach your child when they know that your child is not supposed to speak. When they are aware of the rule and keep trying anyway, it is a sign that they are not abiding by their rules.

2. They want to keep secrets about everything and are always cunning

If your child has a friend who knows the rules, breaks them, and lies about them, they need to pay close attention. While breaking rules and pushing boundaries is normal for teens, it can go too far. Habitual cunning is a toxic trait that you don’t want your child to develop.

Keep encouraging your child to talk to you about everything. Keep an open line of communication at all times and assure your child that you will not judge him or her for anything. Communication can help both of you if your child is in a difficult situation with a negative influence.

3. They take unsafe and unnecessary risks

Risky behaviors are often copied and children are more likely to take risks together than alone. If someone in your child’s life takes unsafe risks, they are likely to be a bad influence on your child. These situations can quickly become serious, so it is important to recognize them and act immediately.

A common unsafe risk for teens is speeding or texting while driving. With younger children, an unsafe risk may be climbing onto the tallest play structure. Any unsafe risk can be attractive to your child, so watch out for this behavior.

Responding may seem like harmless behavior, but that is far from the truth. Back talking is toxic and reveals that someone could have a negative influence on your child. If a child makes a sarcastic comment or questions everything you say, it is probably not a good influence.

Children who respond to adults have an authority problem and lack respect for adults. The worst part about this is that your child can pick up this habit quickly.

5. Your child’s behavior changes when they have spent time together.

If your child’s behavior changes with this person, you need to pay attention. You may notice this behavior while your child is in the presence of that person or at any time afterward. If your child has an unusual attitude, behaves disrespectfully, or seems unusually withdrawn, it is a sign of a problem.

Another sign that your child’s behavior is changing is if he no longer wants to do the things he used to enjoy. This is a sign that they are imitating the friend who is a bad influence. It often means that they are attracted to things that the other person likes.

In younger children, you can observe the signs of a controlling person in other ways. If someone tries to stop your child from doing something they want (and are allowed to) do, it is a red flag. Another sign is that the person tells their child that they cannot be friends with someone else.

You may notice someone bullying, teasing, looking down on, and putting other people down. They can also talk behind other people’s backs. These types of behaviors are indicators that someone could have a negative influence on your child.

You want your child to be kind and compassionate throughout life. If they see someone in their life treating other people unkindly, they may pick up on those habits.

To reinforce the correct way to treat others, ask your child to think about how they feel. By putting themselves in the position of victim, they can acknowledge their friend’s bad behavior.

8. Your child seems scared or intimidated.

Your friend may allow a person in his life because he is afraid not to. If they can’t stand up to someone, they might think their only option is to get on the person’s good side. Feeling intimidated could cause your child to accept things that he would not otherwise do, making the situation worse.

Your child may even begin to exhibit the same behavior that bullied him in the other person. Children do not want to be bullied or bullied and will often do anything to avoid it.

9. Your child seems obsessed with pleasing that person.

When your child concentrates too much on pleasing someone else, it is a red flag. This behavior could mean that your child is being used, and they will Do nothing to be included. When someone like this is in your child’s life, they will want to step in.

The balance should be the same in your child’s relationships, whether with an adult or another child. They should never feel the need to do things they do not want to make someone else happy. Make sure your child knows that Deserves more than that in their relationships.

You may not have realized that children can be manipulative, but it happens often. Your child can be manipulated by adults in his life and for his friends. Some of the signs of tampering include:

If someone in your child’s life behaves this way, it is a negative influence. Not only will your child start to behave in this way, he will also be personally affected.

Being manipulated can make your child question his reality. It can make them feel like they are to blame, even when they did nothing wrong. Also, it can cause them to lose their sense of self-worth and worth.

You need to step in if someone in your child’s life is a bad influence. Keep in mind that it may not be easy because your child cares or loves the person. Find a way to help your child understand why that person is not a good influence.

Describe the problem you are having with that person, and then explain that the behavior is unacceptable. This way, the next time your child sees negative behavior, his thoughts will come to mind. You also can encourage your son make new friends who are good influences.

While it is not always a good idea to completely remove that person from your child’s life, set limits, when this is the case, make sure you are always present when your child is with that person. Since you cannot be at school with your child, consider speaking with the teacher to monitor the behavior.

While you can’t always control the people in your child’s life, you can still help in the situation. When you think someone is a negative influence on your child, be on the lookout for the behaviors listed above.

The instant you recognize behavior in action, speak up. You should set limits so that your child is clear that the behavior is unacceptable.

It is not always possible to eliminate a negative influence in your child’s life, but you can talk to him. Explain why the behavior is unacceptable and that they are not allowed to behave that way. However, if all else fails, it may be necessary to cut the contact.

15 Behaviors That Attract More Positivity Into Your Life