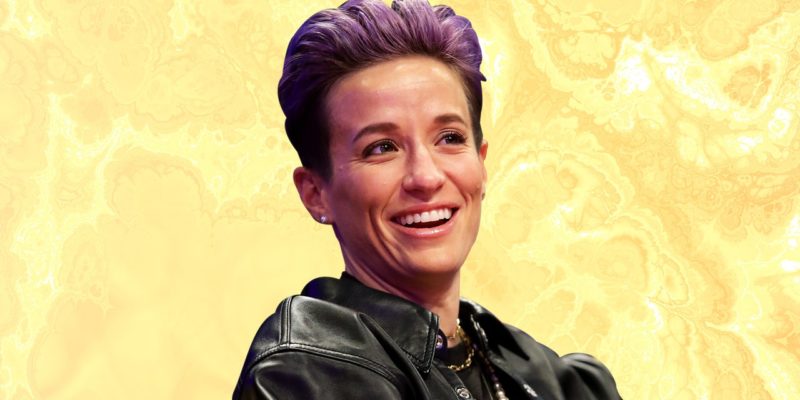 Part of my job — and arguably one of the best parts of my job — is tracking Megan Rapinoe‘s hair color. Nearly as iconic as her soccer skills, the vibrant shade she’s become known for made its debut in May 2019 at a U.S. Women’s National Team match versus Mexico, and the captain has more or less kept it going ever since. But as closely as I’ve been paying attention, I was never quite sure if should be considered a shade of pink or purple. Even with her right in front of me on a live Zoom call, I still wasn’t entirely convinced one way or the other. So I asked her.

“This is hard because it does have a mind of its own. But my girl Riawna [Capri], who usually does my hair out in LA — she’s dubbed it ‘Rapinko,'” Rapinoe says. But even she doesn’t seem fully convinced. “So it’s like pink, rearing into the purple lane. It does vary, though, depending on what dye I have at the time. Sometimes I have to refresh myself. Sometimes I want to go a little bit more purple or whatever. So it’s a little bit of both. It depends on what day you catch me.”

It just so happens I caught her on a pinker day, and it’s sure to look extra-vivid in the ads she took a break from filming in order to chat with me. The ads are for a new Schmidt’s campaign about what the brand is calling FOBO — fear of body odor — and how it doesn’t have to be a thing with its natural deodorants that, Rapinoe says, actually work.

I told her that, like many people who have long used traditional antiperspirants, I’m pretty skeptical of natural deodorants. And she gets it.

“I’m here to tell you, rest assured, rest easy: It works,” she responded. She knows it’s been tested and shown to work for 24 hours, but it’s what she’s personally experienced using the product that really convinces her of its effectiveness. “I work out a lot every single day, and I wear [the brand] Dri-Fit, which does not smell good pretty much ever. And I don’t have B.O.”

Changing the World One Map At A Time