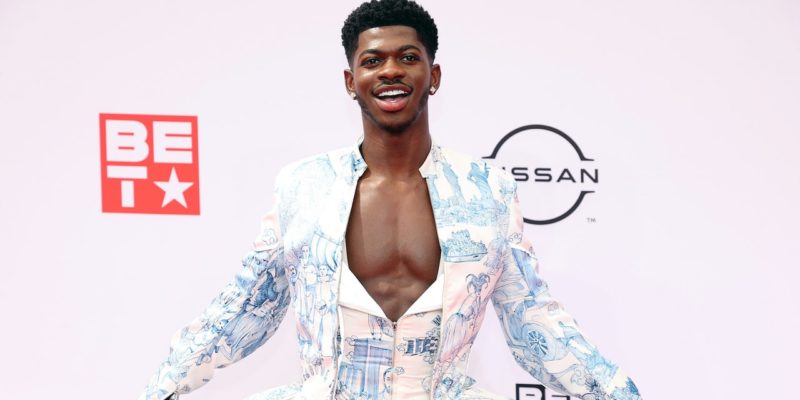 Awards shows are back in full swing after a year of largely virtual proceedings, and that includes Sunday night’s 2021 BET Awards (hosted by Taraji P. Henson), for which several celebs turned out to indulge in what for them is a state of normalcy. For those of us who aren’t regularly invited to awards shows? Well, we’re just here to watch.

Lil Nas X hit the 2021 Bet Awards red carpet making sure the only name you will call him by is Total Hottie. The rapper, who just so happens to be performing tonight, turned out to the ceremony looking like an absolute Disney fantasy. For the occasion, the “Montero” singer wore a white gown printed with an elaborate blue scenery that appears to combine renaissance with modern-day imagery.

It’s a look that even Cinderella would envy. Lil Nas X is wearing a giant, fairytale-esque skirt and bustle. In true form, the rapper paired the giant skirt with a matching zip-up (or in this case, mostly zipped down) corset, white suspenders — and that’s about it. He let his glistening bare chest finish off the look.

While the dress is something we’re sure to be talking about for a while, the rapper’s makeup complements it nicely. He appears to have just a bit of definition to his top lash line as well as his waterline, and there is a glow emanating from his cheeks. It’s almost as bright at the top row of icy grills he chose for a helping of bling.

We always enjoy Lil Nas X’s red carpet looks, and this evening, he definitely showed out in a major way. We wonder what other styles he’ll grace us with once he takes the stage to perform — something tells us they’ll be something to talk about.

Check out more of our awards coverage: