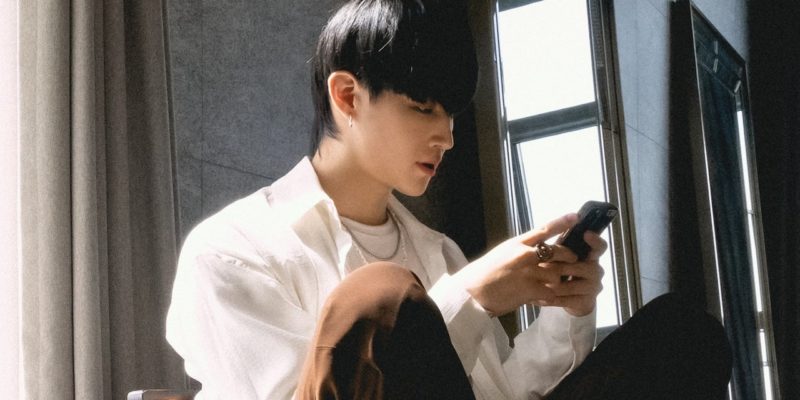 “Even when you’re not working, you can find other excitement,” he continues. “You can get inspiration from that as well.”

However, when he is working, Jay B feels like he has a lot to prove now that he’s under a new label with people to impress. But what exactly does he feel like he has to prove? “That it wasn’t wrong that Jay Park chose me,” Jay B reveals. And how will he measure that? Up until recently, Jay B solely looked to streaming charts as validation. Now, his own satisfaction with his music is what truly matters, instead of being lead by what others think. Chart numbers are but a cherry on top of it all.

Last year, I riffed a lot on the astrological-like set of traits Jay B has given himself as a performer and how JB presents himself for public consumption: sleek, stubborn, disciplined, and sharp. As Jay B, he lists off “new start, on the bottom, and a hard worker,” in English as his latest descriptors.

When picking three words to describe himself at his core as Lim Jaebeom, he sighs and hums. This seems to be the part of the interview Jay B takes most seriously. However, someone from his team jokingly answers in the distance, “Sexy, sexy, sexy?” Nope, that’s not it. “Just free,” Jay B corrects him in English. “Very free and more human being. And then,” he pauses to further ponder how he sees himself when no one is watching. “I’m not cute,” Jay B adds with a smirk.

As our time comes to an end, I pose the same question as I did the last time we talked. “How far into the future can you see yourself?” Back then, Jay B was living moment to moment. As of this moment, the future has become clearer to him now. Jay B can see as far out as a fishing-filled retirement. “Of course, I understand I have to build up my career by spending time with my music,” he adds. “But when I’m older, I expect to live in a quiet place, chilling on a beach.”

If the same question comes up this time next year, Jay B doesn’t expect to have the same answer, though. “Maybe one month from now or two months from now or even one year from now, everything should be different,” he explains. “But it’s very important for me to consider what I enjoy at that moment, and what I think at that moment. That’s what you can expect from my answer next year.”

Now, watch Jay B and the rest of GOT7 try nine things they’ve never done before: