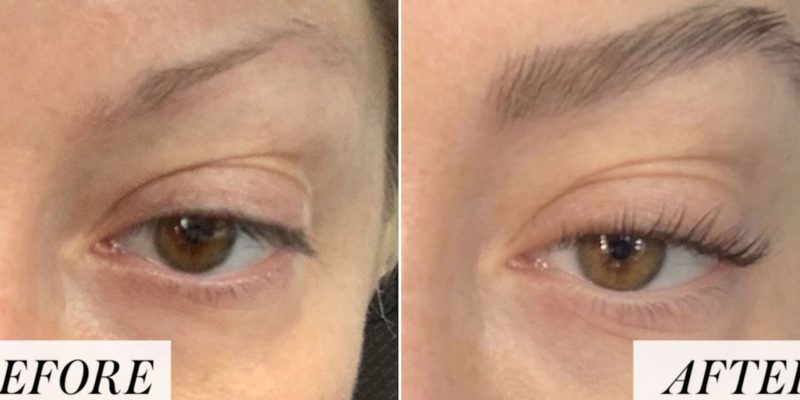 Brows are such an expressive thing. When I say names like Drew Barrymore or Linda Evangelista, you can see those eyebrows; you get the vision. They’re just such a prominent feature that can frame a face, especially if you’re using makeup. Making my brows really long allowed me to put 25 eye shadows on because I had so much space under that long brow. You can be so experimental with eyebrows. There are so many different ways and different shapes.

You can get away with really crazy stuff when you’re young. But as you get older, you start to look older when you’re drawing on these harsh brows. So I would try my best to make them look really natural and soft, but that would take 20 minutes per brow. By the time I’m done with my brows, I don’t have enough time to do anything else. If there was an early morning shoot, I would just put a hat on, and I just constantly covered my brows. I would even cut long bangs to hide them.

Eventually, I did microblading. Unfortunately, when you don’t have any actual hair, you just see these little drawn-on lines on your face, and because it’s a tattoo, it changes color. It started out really dark. Then, it got to a nice shade, but I still felt I had to put a little powder over it because you could see the shine on the skin, you see a shiny drawn-on line. Basically, you’re not fooling anyone. I just didn’t like the way it looked, so I let it fade away.… I needed the hair.

One time, I went to get eyelash extensions, and I was like, “Can you just do just only my eyebrows?” And I did it and was like, Oh my god, this looks amazing. This is what I need. That’s when I started to research eyebrow transplants. I went into a spiral of figuring out if certain celebrities had them. It became this obsession until I finally did it myself years later.

The big reason why I waited is it’s very expensive plastic surgery. I’ll tell you, I paid about $8,500. [Ed note: The minimum cost is about $5,000, according to Haalas.] For me, having eyebrows is priceless and life-changing, but that’s a lot of money. So it wasn’t something I could do right away. Also, I wanted to make sure I went to the right person, and I got a really good recommendation for a well-known plastic surgeon, Yael Halaas.

I paid about $8,500. For me, having eyebrows is priceless and life-changing, but that’s a lot of money.

It would not just be the money, either; but just thinking, I’m going to be in pain. I’m actually getting plastic surgery, I’m nervous. What if it doesn’t look good? You literally take a piece of scalp. I’ll just get into this now. You can take a piece of scalp, and they pull the follicles out of the actual skin. (I don’t even feel the scar on my scalp anymore, and my hairstylist can’t see it either.) I mean, from what I could tell … I was just laying there.