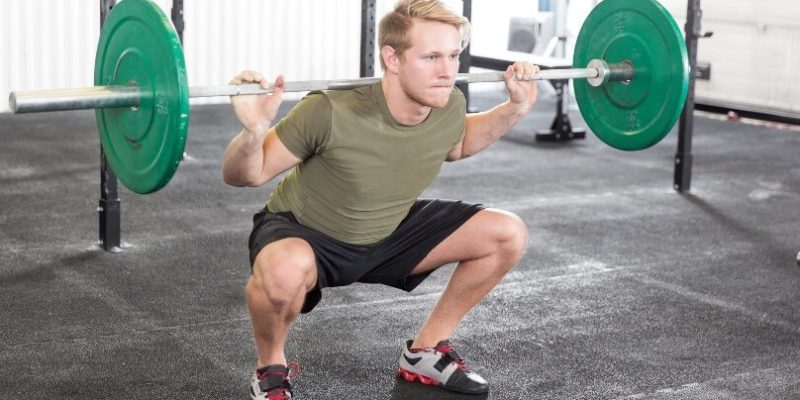 Broadly speaking, there are two kinds of barbell squat: the high-bar and the low-bar squat.

These names have nothing to do with the equipment you’re using—both involve a standard barbell—but instead refer to where you hold the barbell on your back while squatting.

To wit, the high-bar squat has the bar 2 to 3 inches higher on your shoulders than the low-bar squat.

Although this is a subtle change, it’s enough to modify the mechanics of the exercise so that they feel like very different exercises. This, in turn, has led many people to wonder which kind of squatting is better for gaining muscle and strength.

The long story short is that both styles of squatting have pros and cons for different people and goals, but neither is necessarily “better” or “worse” for everyone.

In this article, you’ll learn what the high-bar and low-bar squats are, how to do them with proper form, and when you should use one versus the other.

The High-Bar vs. Low-Bar Squat

The primary difference you’ll notice while squatting, aside from where the bar presses into your back, is that your torso remains more upright and your knees travel farther forward in the high-bar squat than in the low-bar squat. 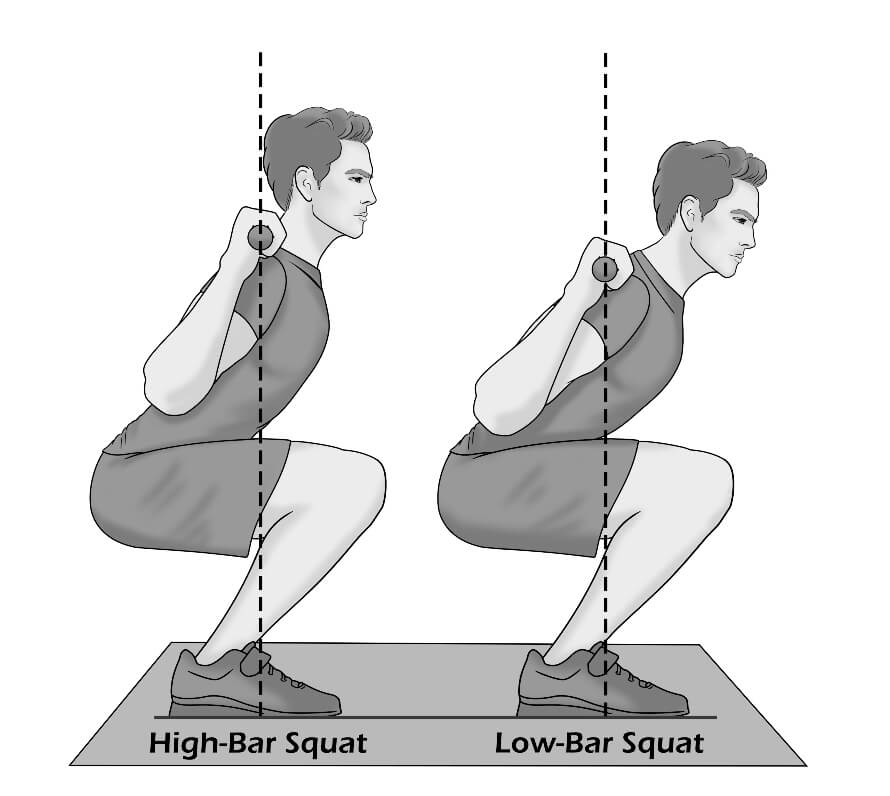 You may also be wondering, why not place the bar somewhere between these two points? A medium-bar position?

You can try and put the bar somewhere between the high- and low-bar positions, but you’ll probably find that it just slides down to the low-bar position after a few reps.

Anyway, some people claim that this difference in torso angle between the high-bar and low-bar squat drastically changes the muscles that are trained by each variation. Specifically, what you’ll typically hear is that the high-bar squat preferentially trains your quads, whereas the low-bar squat emphasizes your lower-back and glute muscles.

You’ll also notice that you can probably squat 5 to 10% more weight using the low-bar position instead of the high-bar position. This has led many people to think that the low-bar squat is better for gaining muscle because it allows you to use heavier weights.

And almost all of this is twattle.

First, let’s address the faulty idea that high-bar squats are better at training your quads and low-bar squats are better at training your glutes and lower-back. Evidence against this idea comes from a study published by scientists in the Journal of Human Kinetics, which found that muscle activation of the quads, glutes, hamstrings, and spinal erectors was identical in well-trained weightlifters using both the high-bar and low-bar squat positions.

That is, both squat variations trained all of the relevant muscle groups equally.

Other research has found similar results when comparing muscle activation during the front and back squat and when using full (“ass-to-grass”) and parallel squats.

So, if muscle activation is the same during the high- and low-bar squat, why can most people lift more weight in the low-bar position?

This is because the low-bar squat position puts you in a slightly more mechanically advantageous position for squatting heavy loads than the high-bar squat position. Although your muscles produce the same amount of force during both styles of squatting, the low-bar position is a little more efficient at using that force to move the barbell.

Think of it this way: Although two cars might produce the same horsepower (force), the one with better gearing will be able to pull heavier loads. So it is with the squat—you can think of the low-bar squat as having slightly better “gearing” for moving the barbell.

Thus, both kinds of squatting (and front squats, for that matter), are all roughly equal in terms of their ability to build muscle.

This isn’t to say that everyone can benefit from both styles of squatting equally, though.

Quickly calculate your calories, macros, and even micros for losing fat and building muscle.

Your free stuff is on the way!

Should You High-Bar or Low-Bar Squat?

If you’re like me, and you have fairly average limb lengths, mobility, looks, intelligence . . . *begins sobbing quietly* . . . and you just want to get stronger, build muscle, and stay healthy, then it doesn’t matter what style of squatting you do. You can stick entirely to high- or low-bar squatting or do a combination of both—do whatever suits your druthers.

That said, if you’re a bit of an anatomical anomaly or you have more specific goals, then you may want to be strategic about which kind of squat you choose.

You may prefer the low-bar squat position if . . .

And you may prefer the high-bar squat position if . . .

Some people also report that they don’t feel as “tight” or secure while high-bar squatting, but this is mostly just a matter of practice. After a few weeks of high-bar squatting this should no longer be an issue.

In the main, it doesn’t matter whether you use a high or low-bar squat position. Both are equally effective for building muscle and strength, and the only reason to use one over the other is due to anatomical differences, personal preference, or to compete in powerlifting.

There’s one rider to the above point that has to do with working programming: Whatever style of squatting you choose, make sure you do it at least once per week for at least 8 to 12 weeks, preferably longer. The reason for this is that constantly switching back and forth between high and low bar squats every week makes it difficult to master either style, which reduces how much weight you can use and thus how much muscle you build.

And if you really can’t decide which style you want to try first, start with the low-bar position. It’ll let you use slightly heavier weights, so why not give it a whirl first?