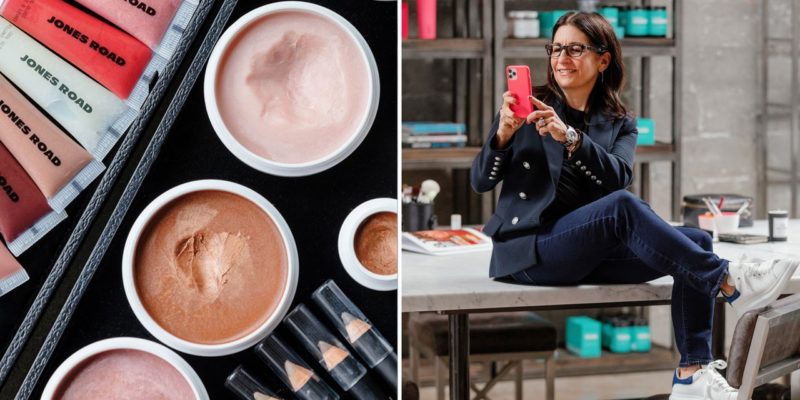 Turns out 38-year-old Bobbi Brown didn’t know much about 63-year-old Bobbi Brown. Because 63-year-old Bobbi Brown has every intention of working — hard. On October 26, 2020, she launched her second makeup line in 30 years: Jones Road. I have to ask first: How do you come up with brand name #2 when #1 was the most personal option possible — your actual name? It has to be meaningful, right? Maybe Jones Road is the Chicago street of her Russian immigrant grandfather’s car dealership. Or the address where she first met Steven Plofker, her husband of 32 years. Perhaps her third son was born in the backseat of a car racing down Jones Road to the hospital? Wrong, wrong, and wrong. “It came from Waze,” says Brown. “In the car, it’s my job — when I’m not Instagramming — to look at Waze and tell my husband [which way to go]. And [on one trip], I looked at the map and I’m like, ‘Jones Road Beauty.‘”

The name was one of the last elements to fall into place. The essence of Jones Road (an edited collection of clean, simple, multipurpose makeup) and the formulas (the part-moisturizer, part-skin-tint Miracle Balm, the no-goop lip gloss, the cushiony Just a Sec eye shadow) were all well underway. “I knew I wasn’t done teaching,” says Brown, who first developed her you-but-better aesthetic to, in a way, work around her own limitations. “I moved to New York in the ’80s, and it’s Studio 54, disco, the makeup is contoured. I couldn’t do it. I wasn’t talented enough to do what Kevyn Aucoin did. So I started kind of blending the blush, [using] blush that looked like the color of your cheeks. And it started catching on.”

Then there were the lipsticks, the Lauder deal, the 14-year run as the Today show’s beauty editor. Bobbi Brown was the world’s patron saint of “natural makeup.” (Her products came to be sold on every continent except Antarctica.) But you know what? “It was still a lot of friggin’ makeup,” says 2021 Brown. “Too much makeup, if you ask me now. And I want to be part of showing people how good they could look without it. Even if you wear a red lip or a cat eye or whatever, the rest of you doesn’t need to look like you’ve caked on anything.” Jones Road launched with five different eye and lip formulas (plus that all-over Miracle Balm in several shades) and just added its first base product. It’s a pencil for your face, and it’s called, well, The Face Pencil. Each of the 25 creamy shades is designed to target redness and discoloration where you need it (and only where you need it). “[Jones Road] isn’t ‘no-makeup makeup.’ You just look so much better,” says Brown. “I wanted to have a hashtag called ‘how not to look like shit.’ Really, it’s why I wear makeup. When I was testing the Miracle Balm, I gave it to all my friends who are my age and they’d come back and say, ‘I need more. This is the only thing I can put on that… I don’t look bad, I look better.’ I’m like, ‘Yeah, that’s the idea.'”

9 Rules for the Woke Birdwatcher