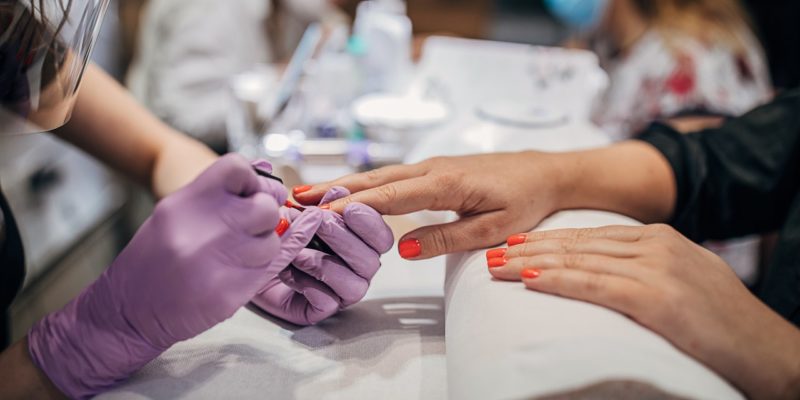 In the U.S. in early 2020, the looming threat of the pandemic still felt new and uncertain. A dearth of understanding and lack of guidance at the state or federal level on the best way to combat the virus meant that millions of people were still clocking in to work each day for weeks after COVID-19 was discovered — and that even after some industries went on lockdown or went remote, millions of workers were still compelled to continue doing so throughout the entirety of the pandemic. In the spring and summer of 2020, salons across the country changed operating procedures or closed altogether to accommodate for mandates in their region.

By March 20, the order had come down for countless small businesses in four states — New York, New Jersey, Connecticut, and Pennsylvania — to close up shop. Among them were New York City’s more than 4,000 nail salons, the vast majority of which are staffed by immigrant women of color. During that uneasy in-between period, Maria Lopez*, a 30-year-old native of Ecuador who now lives in Queens, had her brush with COVID-19. “In late February of 2020 I got sick at the nail salon I worked at,” she tells Allure. During this time, one of the clients she saw included a doctor who was working at a busy hospital in the tri-state area. While COVID-19 typically takes 2 to 14 days for symptoms to manifest, she tells Allure that she began to notice her own symptoms later in the day.

Her boss was unmoved by her plight; according to Lopez, her employer did not provide her or the other workers with PPE and charged them $15 a pop for protective face visors. “It didn’t matter to her,” she said. “We had to buy our own masks, gloves, and everything… and we were told we didn’t need to wear them when there weren’t clients.”

After she tested positive for COVID-19, Lopez left her job at the salon (which soon closed during the pandemic lockdown anyway) and began working at a friend’s produce delivery business to make ends meet. As many nail salons have closed during the pandemic there were few options available to newly unemployed nail salon workers, more than 80 percent of whom are cut out of federal aid like unemployment insurance or stimulus checks due to their immigration status, according to a March report from the New York Nail Salon Workers Association (NYNSWA). In April, a year after the order came to shut down the salons, New York state lawmakers would approve the $2.1 billion Excluded Workers Fund, an emergency measure to provide relief to the estimated 300,000 immigrant workers and other workers with nontraditional jobs who had been excluded from government aid programs, but there was nothing like that on the books when the salons first closed, and workers still had bills to pay.

After her workplace shut down, Mariwvey Ramirez, a single mother and 20-year veteran of the nail salon industry who is originally from Mexico, tried her hand at street vending. She sold fruit on the sidewalk for months until her salon hired her back — at reduced hours. “Other nail techs went into cleaning or construction,” she tells Allure in Spanish via a translator. “We were practically earning nothing. It’s not a real job, everything was closed for March, April, June… In my building, we went on rent strike, which we are still on to this day.”

“They had their livelihood cut off from one day to the next.”

Lopez and Ramirez were not the first nor the last nail salon workers to be impacted by the pandemic. Their entire industry has been decimated, and a recent report from NYNSWA further outlines the heavy human toll that the pandemic has taken on the nail salon worker community. Published on March 22, 2021, the report found that, in a February 2021 survey of 645 nail salon workers, 29 percent said that they had tested positive for COVID, and an additional 9 percent said that they believe they had contracted the virus at some point but were unable to get a test at the time of their illness. In addition, despite the in-person nature of their job, nail salon workers were not given any kind of early access to the vaccine, and many of them live in the very neighborhoods where the virus raged hardest. Ramirez, an NYNSWA member, said she knew of at least two coworkers who had contracted the virus; one of them died, leaving behind four children.

An Emergency for Everyone

“This year has been incredibly challenging for everyone, [and] in speaking with our members it just becomes so clear how already existing inequalities based on class, race, gender, and immigration status have gotten much deeper,” Luis Gomez, Organizing Director of the New York-New Jersey Regional Joint Board, Workers United, Service Employees International Union (SEIU), the union home of the NYNSWA, tells Allure. “Our membership is largely undocumented; 80 percent were not eligible for any kind of federal assistance. They had their livelihood cut off from one day to the next. They were getting in line at the food bank, using what little savings they had to buy rice and dried beans in bulk, asking the church for assistance to buy necessary medicines and going on rent strike out of sheer necessity.”