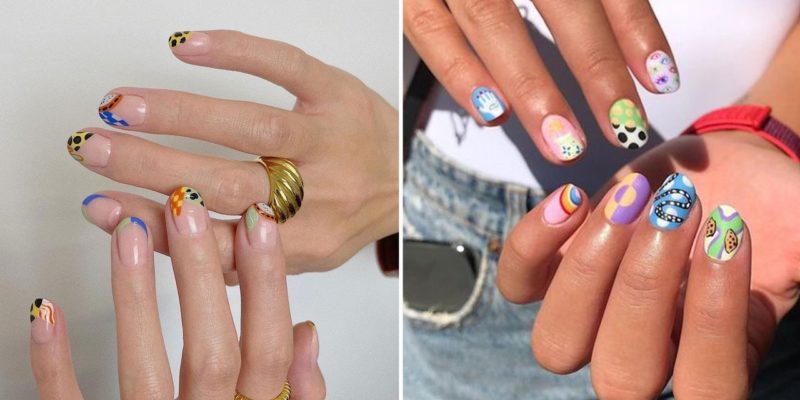 Bhamra moonlights as a tattoo artist once a month, and it shows. Her elaborate illustrations that seemingly require the same concentration needed when operating a vibrating needle pay homage to the tattooists she is surrounded by. She’ll paint on Old English lettering on top of rainbows, fill hearts with flames, and deck out French manicures with teeny-tiny black roses the likes of which you’ve definitely seen inked someone’s arm before. Of course, hints of London are infused in Bhamra’s work, too. She loves mixing and matching patterns like the clashing street art, galleries, and installations she passes when she walks to work. “Every corner is inspiring,” she says. “I am always taking photos on my journeys when I spot something amazing.”

Too much is never enough for Peter. “I like way too many styles to ever intend to aim for just one kind of vibe,” they say. In Australia, getting your nails done is treated as a novelty instead of a consistent part of a beauty routine. Needless to say, Peter goes all in for their clients’ visits with animal prints overlaid on technicolor ombre, Bratz illustrations backed by glitter, and slime-like drips falling down a neon base — just to name a few. When you decide to treat yourself, might as well go all out, right? Instead of pulling ideas from the sights and scenes of Melbourne, people-watching is the catalyst for Peter’s creations. “I like to imagine what sort of nails a particularly intriguing stranger might have and what would suit their imagined personalities,” they say. And based on their portfolio, Melbourne is filled with colorful, glittery people worth commemorating.

A version of this story originally appeared in the May 2021 issue of Allure. Learn how to subscribe here.

Should You Wear Elbow & Knee Sleeves or Wraps While Weightlifting?