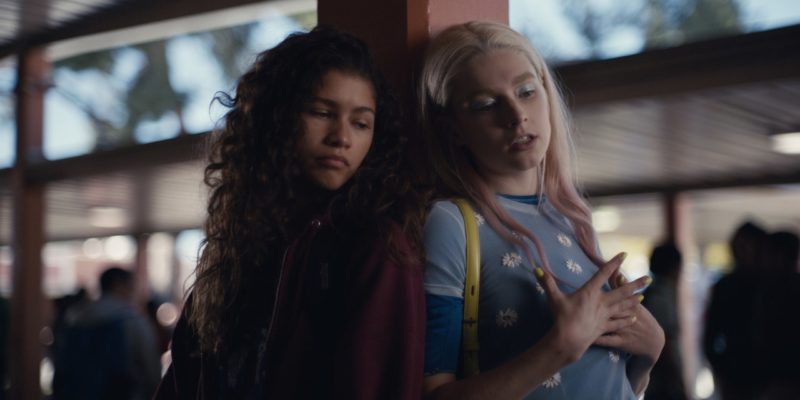 “We’re really big on lack of foundation,” Davy shares, and that will be true for the new season, too. Instead of the thick base makeup often used for other television shows, she’s veering toward tinted, shimmery sunscreens to amplify the actors’ naturally luminous, fresh complexions. Davy’s top product pick is the Colorescience Sunforgettable Total Protection Face Shield Glow, which has a universally flattering golden radiance and packs SPF 50.

If extra coverage is needed, Davy grabs the Chantecaille Future Skin Foundation. “It melts into the skin and looks so much like skin,” she says. Sometimes, she even adds a drop of it to the sunscreen for a custom-blended BB cream. (Makeup artist Molly R. Stern also swears by it for giving mature skin a dewy finish.)

Because Euphoria is filmed on a 35-millimeter camera, a “grainy, soft texture is over everything,” Davy says. “We always cover blemishes and whatnot, but we’re embracing super-glowy skin and not really worrying if it’s too shiny because it’s not HD. It’s blurred.”

Instead of gluing on dramatic falsies for season two, Davy is favoring chunky lower lashes built up with loads of mascara. This look helps the characters’ lids fit into the rawer look of the new episodes.

The last product Davy mentions on our call is the Anastasia Beverly Hill Brow Freeze. She combs up brows with the translucent wax to lock them in place for filming. Allure‘s Nicola Dall’Asen adores it too for its fluffy soap brow effect.

Now that I know what Davy is working with, my imagination is doing its best to pair them together and dream up possible looks we will soon see on Rue, Jules, Maddy, Kat, and the rest of the cast. The release date for Euphoria season two has yet to be announced, but it’s safe to say it can’t come soon enough. My face is ready for the inspiration that Davy is sure to deliver.