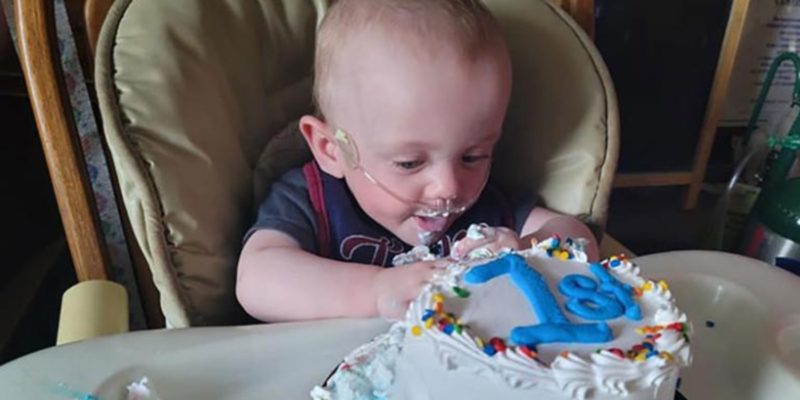 
The world loves it when the little one, faced with enormous obstacles, beats all the odds and comes back to win. So, you could say that Richard Scott William Hutchinson, who celebrated his first birthday on June 5, is the last small but powerful contender.

When Richard’s mother, Beth, went into preterm labor, she didn’t have to wait another 131 days. Weighing just 11.9 ounces and being 10.2 “in length, at the time of his birth, Richard’s gestational age was a mere 21 weeks and two days.

After the little baby was sent for care to the Neonatal Intensive Care Unit (NICU) at Children’s Minnesota Hospital in Minneapolis, his parents were told he had a 0% chance of survival. But Richard set out to prove the doctors wrong, and that is exactly what he did.

The icing on this miracle baby’s first birthday cake? Holding Guinness World Records (GWR) officially declares him “the most premature baby to have survived”.

But the road to Richard’s historic birthday was not easy. The limitations of the coronavirus pandemic prevented his parents from staying in the hospital with him, so every day, Beth and Richard’s father, Rick, traveled to and from the family home in County St. Croix, Wisconsin to Minneapolis to visit her newborn. child.

“We made sure we were there to support him,” Rick said. Guinness World Records. “I think that helped him get through this because he knew he could count on us.”

“Rick and Beth fought for Richard day after day and they never stopped defending their baby despite everything,” neonatologist Dr. Stacy Kern told GWR. “His strength and ability to stay positive and hopeful even during the most difficult and stressful times was inspiring.”

RELATED: Hospital janitor forges a lasting friendship between 2 children in isolation after noticing love for LEGOS

“I couldn’t believe this was the same boy who was once so sick, that I was afraid that [might] not survive, ”Dr. Kern said.

MORE: She was born premature herself, and sets up mini-libraries in neonatal wards so parents can read to their premature babies

“The same child that once fit in the palm of my hand, with skin so translucent that I could see every rib and glass of its tiny body. I couldn’t help but squeeze it and tell him how proud I was of him. “

SHARE this inspiring story with others who love good news …