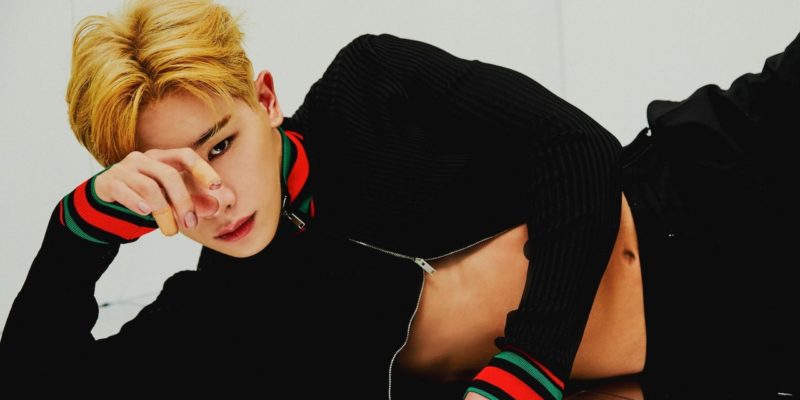 We saw peeks of this side of Wonho among seven other guys while he was a member of Monsta X from 2015 to 2019 with a flash of his abs here; a shirtless moment there. Wonho quickly became known for having the most enviable body in K-pop. Even his peers were mesmerized by his trim physique at award shows. Instead of shying away from this image as a soloist, Wonho kept the momentum going, proving he’s most confident when he’s not, well, fully clothed. “I want to show myself like the real me, how I am on a daily basis and perform as myself on stage,” he explains.

On a deeper level, Wonho isn’t just doing what makes him feel best — he’s also doing what he believes is suitable for everyone. “I feel a responsibility to fill the stage by myself,” Wonho reveals. If that means doing so shirtless, so be it.

“I want to show myself like the real me, how I am on a daily basis and perform as myself on stage.”

After years of slipping on harnesses, stiff suits, and leather pants, Wonho’s exposed solo aesthetic typically includes mesh shirts, unzipped jackets, crop tops, and gauzy blouses left unbuttoned. Basically, as long as something isn’t too tight, bulky, or restricting, Wonho says he’ll wear it. “I don’t really like suits or anything that’s too dressy,” he admits. When I mention this may be his way of translating his athleticism and passion for working out to his stage aesthetic, Wonho quickly agrees. “I would say so,” he remarks.

The same low-key look extends upward to Wonho’s skin and hair, too. As we talk, Wonho constantly smiles so big that I could probably see his molars if I really wanted to. His luminous complexion is free of makeup and an extensive skin-care regimen. When the latter comes up in our interview, Wonho tells me all he does to take care of his skin is wash it and pat on toner.

I have a hard time hiding my shock at the lack of moisturizer in his routine. I think I need one to survive. For some reason, he tells me he’s jealous of that. That’s Wonho in a nutshell, though, if you ask me. Over the years of crossing paths with Wonho during his time with Monsta X, I noticed he has this disarming consideration of the people around him. Wonho’s always paying attention, even when you don’t think he is. But I digress.