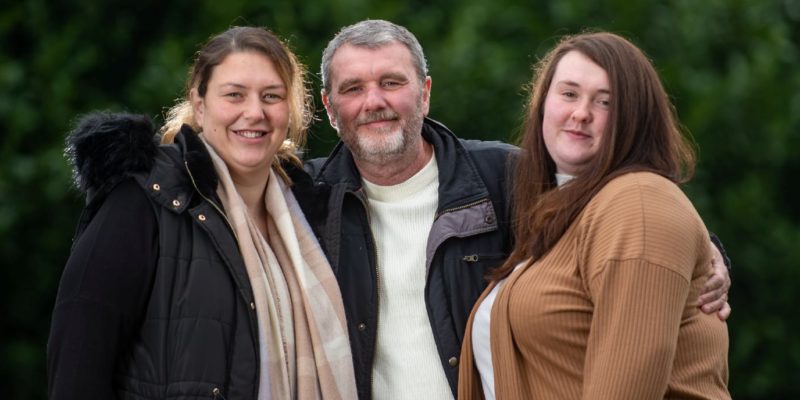 
Two women who discovered they were sisters on Facebook while separately searching for their missing father have been reunited with him after 24 years, just in time for Christmas.

Lisa McLean, 33, and Rebecca Parton, 24, met on social media while searching for their father, David Riggs, in 2016.

They have since formed a close brotherly bond, with Rebecca even acting as a maid of honor at Lisa’s wedding last year.

After meeting, the couple did not give up on finding their father on Facebook.

Finally, three weeks ago, her online appeal received a positive success: Lisa received a friend request from David. She realized that he was her genuine father after she was able to identify the people in childhood family photographs.

Last week David, 53, traveled from his home in Blackpool, England, to meet his daughters for the first time in more than twenty years.

The emotional reunion took place at Lisa’s home in Nottingham, where David also met his grandchildren for the first time.

RELATED: ‘Mom, it’s me!’ Woman meets her son who was put up for adoption 45 years ago and confirms that she made the right decision

Now they are ready to spend their first Christmas and New Years together as a complete family.

Lisa, a mother of five who is a caregiver, said: “It was wonderful… there is so much to catch up, so many years to catch up. The only way I can describe it is a bit cheesy, but I guess it’s a Christmas miracle.

Former Blackpool dock maintenance worker David described feeling “like he won the lottery” and was the “happiest man in the world” after meeting his daughters.

SPREAD the Love – Share on social media to inspire your friends …