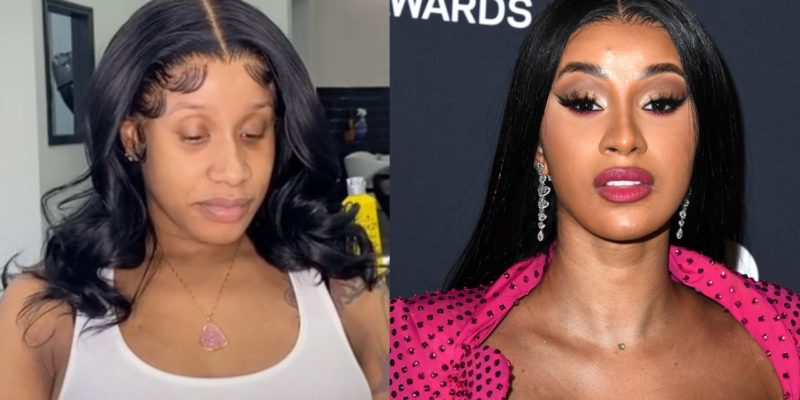 Every so often there’s a celebrity lookalike who drives the internet into a frenzy, such as the Lindsay Lohan doppelgänger who reenacted iconic scenes from The Parent Trap on TikTok or the 19-year old model that looks just like Gisele Bündchen. This time around, it looks like the internet has found Cardi B‘s long-lost twin. After New York City-based hairstylist Claudelande shared a video of her client Ashley with the rapper’s “Up” song playing in the background, folks ran to the comments in awe and shock that the person sitting in the chair wasn’t the regular degular smegular rapper from the Bronx.

The video was originally posted to TikTok on August 12, but a few versions of it have circulated on Twitter and Instagram, too. Truthfully, I was even fooled, and each time I watch the video my brain refuses to comprehend that the woman getting her hair done isn’t actually Cardi B. If it wasn’t for Ashley’s nose ring and arm tattoos, I wouldn’t have known any better.

Even in the comments of Claudelande’s video, folks jokingly referred to her as Cardi C or Cardi D. One TikTok user even wrote “I thought that was Cardi without makeup”, and another commenter said, “damn the moment you realize this isn’t Cardi.” And that’s with good reason because Ashley really looks like Cardi’s twin if you ask us.

It’s not every day that you’re compared to a superstar, but Ashley tells Allure that this isn’t her first time hearing comparisons to Cardi B. In fact, it’s happened to her a few times since 2015, which makes sense because that was when the rapper joined the Love & Hip Hop: New York cast and subsequently rose to fame. One time that year, as Ashley entered a lounge, a bouncer mentioned that she resembles Cardi B, and it hasn’t really stopped since then. “Everywhere I go, [I hear] ‘she looks like Cardi B.’ They’ll say it under their breath, and I’ll hear it,” she says.

8 Positive Ways To Cope When Life Gets Tough

The Dangerous Rise of Sexual Health Myths on Social Media