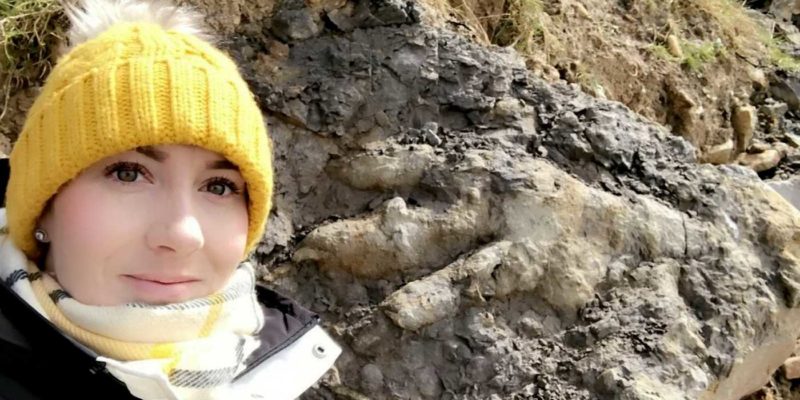 
A woman collecting shellfish was surprised to discover the largest dinosaur footprint ever found off the Yorkshire coast, probably belonging to a ‘Jurassic giant’ megalosaurus.

Marie Woods, 29, was looking for food for her dinner on Saturday when she came across a huge footprint, believed to be around 165 million years old.

Experts have now documented the find and say it is the most significant discovery in the area since 2006.

Marie, who is an archaeologist, said: “All I wanted to do was eat some seafood for dinner and I ended up stumbling on this. I showed some paleontologist friends what I had found and none of them had seen it. It’s really exciting.”

University of Manchester paleontologist Dr Dean Lomax believes the footprint was likely left by a ‘megalosaurus’. Such an animal would have had hips over two meters high and a body length of up to thirty feet. “In short,” he said, “this is the largest theropod footprint ever found in Yorkshire, made by a large carnivorous dinosaur.”

“We know this because the shape and the three-toed print, along with the impression of the claws, are absolutely spot on for having been made by a large theropod … a true Jurassic giant.”

After Marie contacted local experts, it was discovered that the fossil had actually been photographed by local Rob Taylor last year. The image had even been posted on Facebook. However, its importance was not recognized until now.

Marie and Rob have search rights to the footprint, and it is now expected to be on public display at the Rotunda Museum in Scarborough.

Without a doubt, it will be a wonderful study and it will be an incredible sight for the public to enjoy.