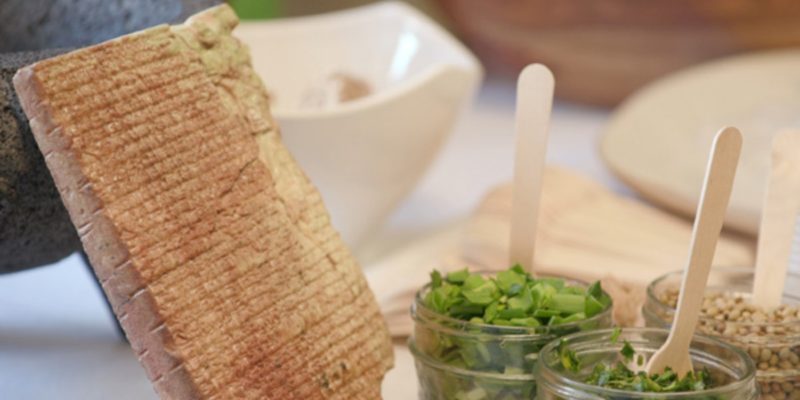 
The world’s oldest recipes, eating habits, and even culinary culture have been decoded by Babylonian scholars at Yale.

The four dishes, recreated by measuring ingredient portions in a scientifically averaged way, turned out to be different types of lamb stew and connect the culinary traditions of modern Iraq, Iran and Syria with their Mesopotamian ancestors.

Aromatic Persian shallot, leek, onion, and garlic are joined by salt and fine-grained meat which, when mixed with water, milk, and barley cakes, give the cook a flavorful stew.

How much garlic, how much milk? It’s impossible to ask, because whoever created this staple, reminiscent of pacha, a modern soup eaten in Iraq has been dead for thousands of years.

When Assyriologists realized that among the thousands of clay tablets carved with cuneiform letters that make up Yale Babylonian Collection—There were the intimate details not only of the recipes, but also of the food preparation and the dialogue about world cuisine, they must have seen an incredible opportunity to learn about the everyday world of this ancient civilization.

Culinary historians and food scientists teamed up with cuneiform readers to form a team to decode these ancient foods, and after a bit of trial and error, they put together four recipes for different stews, providing a fascinating insight into the culture. of the Babylonian and Sumerian cuisines.

Three tablets contained the working recipes, and the largest contained 25 ingredient lists. Its simplicity was similar to that of someone explaining how to make a hamburger today; today’s cultural environment would make it so obvious, but 4,000 years from now the method may be a mystery.

The first course, called me-e puhadi, it is seasoned with garlic, onion and lots of coriander, but the main component is the melting of the fat from the sheep’s tail in the pot. This base is used to fry (more or less) the lamb meat.

Known as alya In Arabic, converted sheep’s tail was an “indispensable ingredient in Iraq, until around the 1960s,” said culinary historian and medieval Iraqi cuisine expert Nawal Nasrallah in a BBC Travel piece in recipes.

“I was very surprised to find out that what is a staple food in Iraq today, which is a stew, is also a staple since ancient times, because in Iraq today, that is our daily food: stew and rice with bread,” Nasrallah said. . . “It is truly fascinating to see how such a simple dish, with all its infinite variety, has survived from ancient times to the present.”

Another dish, which the BBC has written entirely in our own language, is called Tuh’u, and contains red beets, lamb, coriander and beer. It is reminiscent, Nasrallah argues, of the Russian-Ashkenazi borscht, or a stew made by Iraqi Jewish communities called Kofta Shawandar Hamudh, which means beets and dumplings.

The last recipe deciphered was like a chicken pie, with layers of batter stuffed with chunks of poultry cooked in something like a béchamel sauce.

The tablets demonstrated another fascinating cultural development in our history: the recognition of cooking.

“Elamite Stew” is the title of a recipe. Named after another very early civilization from the time of Babylon and Sumer, and one that would be an almost perennial pain in the ass to conquer the kings of Babylon and then Assyria, this stew is based on animal blood, and the texts they recognize it. in the way we would recognize something like tacos, or Pad Thai, something that was once foreign but has become a ubiquitous menu item known to all.

“There is a notion of ‘kitchen’ in these 4,000-year-old texts. There is food that is ‘ours’ and food that is ‘foreign’, ”Gojko Barjamovic, the team’s chief translator, told the BBC. “The foreigner is not bad, it is just different and sometimes apparently it is worth cooking it, since they give us the recipe”

“My houseAs it is called, it includes dill, an ingredient that shows its strangeness, since dill is not used in Iraqi cuisine and is not mentioned in any of the Babylonian recipes, which Yale has put online for others to try.

PLUS: Man Hasn’t Been to the Grocery Store in 8 Months Thanks to Grandpa Inspired Little Pandemic Garden

Iranian cuisine, on the other hand, uses dill, and it is modern Iran where the Elamites lived. So, the trade between the two nations created an understanding of food culture and an appreciation for different flavors.

Archaeologists and scholars have deciphered many ancient texts that give us insight into how people lived in the so-called “black and white era” of history.

RELATED: 14 years ago the Amazon was being ravaged by soybeans, then everything changed when corporations joined activists

In his book Babylon, Paul Kriwaczek details translations of Babylonian and Sumerian receipts, athletic competitions, and even humor, while ancient Greek scholars decoded the musical notation for the world’s oldest song, the Seikilos Epitaph.

CHECK OUT: Culinary skills have improved so much in 2020 that 40% believe they are ready to compete at MasterChef

However, food is perhaps a little more universal than music, sports or commerce, and in the writings of Babylonian chefs we find an incredible human connection to the past, enshrined in lamb and coriander.

(WATCH the dishes being made in the Yale video below).