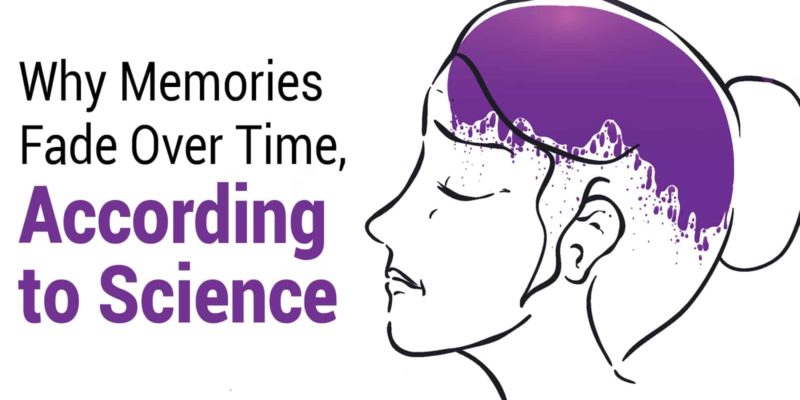 You may wonder why your memories fade after a while. Can you remember all the details of your childhood, for example? Probably not; most people just remember some important events like birthdays or family trips. But what causes these ‘blips’ in memory over the years?

Scientists believe they have found the answer. A team of researchers from the Universities of Glasgow and Birmingham investigated why memories fade. They sought to understand what information we retain in our memory and what details we lose. Many theories have been put forward over the years. But scientists believe they finally found gold with this study.

The study, published on May 26, 2021 in Communications from nature, found that our memories become less vibrant and detailed over time. Only the essence, the main point, is preserved in our minds. Everything else becomes blurry as time goes on.

The scientists also found that the “gistification” of our memories increases when we frequently recall recent experiences.

This research could help with many facets of life and work fields. For example, it could reveal important information about the nature of memories in people with PTSD. The study could also have implications for the repeated questioning of eyewitness testimonies. Finally, you could improve your memory recall when studying for exams.

It is important to remember that our memories do not always coincide with reality. In other words, over time, our memories get distorted. When this happens, we can rebuild them as we see fit; however, in reality, something very different may have happened. Experts suggest that the content of a memory It could change every time we remember it

However, until now, scientists have had a difficult time measuring how our memories differ from the original experiences. They have also faced challenges in figuring out how memories transform over time. So this is a groundbreaking study as to why and how memories fade.

Here’s what the scientists found about memories in the study.

For this study, the researchers developed a simple task using a computer. It measures how quickly people can recall certain aspects of visual memories when asked to do so. The volunteers learned pairs of words and pictures for the memory task. Later, they had to recall different elements of the image when asked to speak to test the quality of their memories.

Participants had to indicate, as soon as possible, certain details about the image. The researchers asked them to remember whether the image was colored or grayscale (a detail of perception). They also asked the volunteers if the image showed an animate or inanimate object (a semantic element).

The volunteers performed these tests immediately after learning the word-image pairs and also after two days. The reaction time patterns revealed that the volunteers recalled significant semantic elements faster than the superficial perceptual ones.

Julia Lifanov, lead author of the study from the University of Birmingham, said:

“A lots of memory theories Suppose that over time, as people retell their stories, they tend to forget the superficial details, but retain the significant semantic content of an event. Imagine reminiscing about a pre-COVID dinner with a friend – you find that you can’t remember the table decorations, but you know exactly what you ordered, or you remember the conversation with the waiter, but not the color of your shirt. Memory experts call this phenomenon ‘semantization’ ”.

Professor Maria Wimber, lead author of the study from the University of Glasgow, said: “The pattern towards remembering significant semantic elements that we demonstrated in this study indicates that memories are biased towards meaningful content in the first place, and we have demonstrated this in Previous studies show that this bias is clearly reflected in brain signals as well.

“Our memories change with time and use and that is a good and adaptable thing. We want our memories to retain the information that is most likely to be useful in the future when we encounter similar situations. “

Other study findings on why memories fade

The researchers found that people tend to get more out of semantic memory content as time goes on. Also, with repeated recall, this semantic memory bias becomes stronger. When the volunteers took the test after two days, they had slower reaction times to the detailed perception questions.

However, when a group of subjects repeatedly viewed the images, different results were obtained. There was a much smaller gap between memories rich in detail and those based on concepts. This makes sense because the researchers didn’t give them a chance for the memories to fade. Therefore, the images were cooler in their minds, in contrast to the other group being tested.

This study may help researchers better understand how memories affect future health. For example, with PTSD, patients often have intrusive traumatic memories. They also tend to overgeneralize these experiences to new situations. This research could provide scientists with a tool to analyze these maladaptive changes in the brain.

The findings can also help experts understand how frequent interviews can bias eyewitness memories. Also, asking witnesses to repeatedly recall the same event can lead to inaccuracies. This study on why memories fade it could be very relevant in this field.

Finally, research shows that studying before a test can improve your memory of significant information. Especially when rest or sleep follows, getting tested before an exam can help improve memory.

Final thoughts on why memories fade over time, according to science

The latest research on why memories fade provides an exciting new insight into how our brains work. Scientists found that people tend to distort the details of their memories over time. In addition, they can only remember certain events, usually the most traumatic or exciting. However, until now, researchers had no way to measure this recall bias and how memories transform over time.

In the study, they found that people tend to remember the significant parts of memories. This happens so that our brain can adapt in the future when we encounter similar situations. The team hopes the study can help in areas like PTSD investigation, witness interviews, and studying for tests.

UMass Scientist Learns How to Improve the Taste of Vegan Protein