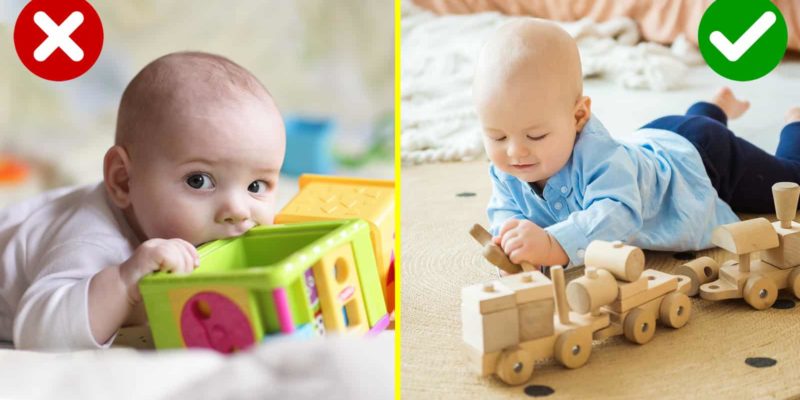 Since plastic was invented in the late nineteenth century, plastic toys have been a great success with children around the world. Plastic made toys more affordable, which meant that even lower-income families could get a toy for their children. However, plastic has come a long way when it comes to safety. Sadly, that journey is not over.

These days, plastic is used for just about everything you can think of. It is difficult to find a toy that does not have plastic. However, plastic is a man-made material and contains many chemicals.

Toy Regulations in the United States of America

Plastics used to contain a large number of harmful chemicals before governments stepped in and started regulating the industry. However, it won’t be until 20th century that the United States had a toy regulation law. In the United States, President Richard Nixon promulgated the first national standard for toys in 1969.

This law did not specifically target plastic toys. He addressed all toys and addressed more physical safety issues, such as toys that break easily or are too sharp.

Finally, in 2008, The Consumer Safety Standard Specification for Toy Safety became law. This law states that all toys must be tested and certified to meet ASTM F963-17. This rule banned many of the harmful chemicals in plastic.

Unfortunately, there are still a lot of chemicals in plastic. You also need to worry that they may be different from country to country. That was the focus of the study conducted by researchers from the Technical University of Denmark in conjunction with researchers from the University of Michigan and UN Environment. They found that some plastic toys could contain more than 100 harmful chemicals.

The research results were published in volume 146 of International Environmental.

Researchers first noted that it is difficult to find the chemical composition of plastic toys, since manufacturers are not always required to list them. So they ended up using data from 25 peer-reviewed studies. They grouped the toys into three general plastic groups: hard, soft, and foam.

While they estimated the exposure of Western children to these plastic toys, that was not the focus of the study. The focus was specifically on how many unique chemicals they found in these toys and how many were on the regulatory lists of concern.

The lists they used were the European Toy Safety Directive 2009/48 / EC, the European List of Substances of Very High Concern for Authorization (SVHC), the CalSafer Candidate List, and the California Proposition 65 List. The amount of chemicals they found on these lists was staggering.

The list ended up containing 126 chemicals out of the 419 they found in the toys. Of those 126, they found 31 plasticizers, 18 flame retardants, and eight fragrances. Of the 126 chemicals, 19 of them were extremely high-risk chemicals. Sixteen of them were included in the regulatory lists of concerns.

Why are these chemicals used in toys?

The biggest problem with these regulatory lists of concern is that there is no central international agreement on what is acceptable and what is not. Each country has its plan. There are some chemicals that are obvious bans everywhere, but there are still a host of other substances on that list to consider.

Worse, many of the chemicals have not been tested to see if they harm people. Without any conclusive data, they remain off almost all the lists.

Without a watchful eye (the government) to regulate them, manufacturers continue to use chemicals that can be harmful. It is a widespread global problem that does not receive as much attention as it should.

How You Can Protect Your Children

The best way to protect your children from harmful chemicals in plastic is not to buy plastic toys for them. However, this is easier said than done. There is not a great abundance of wooden toys, the most popular toys that children want do not come from wood, and wooden toys are expensive.

It is not practical to avoid buying toys. made of plastic in this day and age. Therefore, you will have to be a smart and informed parent when it comes to plastic. There are a few things about plastic to keep in mind when shopping for toys. At the very least, you can make sure the plastic meets the standards in your country.

There has been a whole movement against Bisphenol A, better known as BPA. Most of the time when a product contains plastic or is packaged in plastic, you will see it labeled as BPA free. There is no strict law saying that manufacturers cannot use it, but many manufacturers are choosing to avoid this chemical for good reasons.

BPA is mainly found in plastics used to store or package food. This includes polycarbonate plastics and epoxy resins.

Scientists and researchers have shown that BPA can have very negative consequences on the health of children, especially the brains of fetuses. However, the US Federal Drug Administration (FDA) has deemed BPA safe at low levels. That is why the substance is not prohibited. Fortunately, many manufacturers are taking the ban into their own hands by not using it in their products.

Unfortunately, not all manufacturers label their products BPA-free as such, so you still won’t know if they have BPA unless you look at the recycling number for the plastic. For most polycarbonate containers, the recycling number It will be at the bottom or somewhere in the box. If it’s a 7, it probably contains BPA.

Not all containers marked 7 are polycarbonate, so you will need to check one more thing. If the box is labeled unbreakable or microwave-safe, it probably has BPA. On the other hand, if the the container is marked such as 1, 2, or 4, it may not contain BPA.

It was previously said that it is not practical to think that it will move away from all plastic products. However, you can reduce the amount of plastic you have in your home. Some ways to do this include using unbreakable glass storage containers, substituting wooden toys for some toys, and purchasing items made from organic cotton or hemp.

However, these materials can be of better quality. Since they cost a bit more than plastic, you probably need to stretch your budget a bit, but it’s better than getting something that could make your child sick.

Wait until they are older to give them plastic toys

Contamination of most chemicals in the plastic it would happen due to ingestion over a period of time. This happens quite often because young children put toys in their mouths. This is a completely standard action – it’s the way babies explore the world around them. It should not be interrupted with contaminated plastic.

Older children know not to put toys in their mouths (although there’s no guarantee they won’t anyway). His immune system is also better developed. Although the immune system cannot fight it with a chemical, it may help your child fight the symptoms.

If you are in the United States, you will compare your plastic to ASTM International standards. If the plastic is labeled with this, it does not contain any harmful substances that the government has banned. Note that this does not mean that it is BPA free, but you can at least relax knowing that it is free of other substances.

This article was not intended to scare you into buying plastic toys. There are many toys made of plastic on the market that will not harm your child. Also, if your child is old enough to know not to put the toy in his mouth, he will be much less likely to become contaminated.

There hasn’t been much research on the number of children getting contaminated by toys made from plastic, but right now, the numbers are relatively low. While the risk is low, you can still choose to be a good parent and follow the tips above. After all, low-risk or not, it never hurts to be safe than sorry.