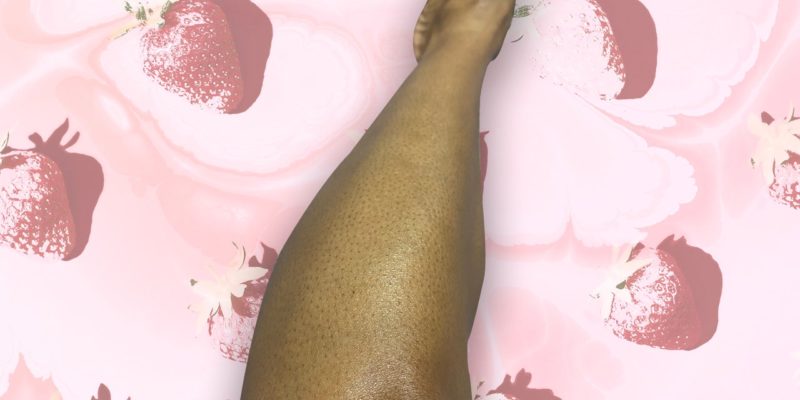 There is an airborne virus circulating through the world right now, which I would say is enough to be insecure about. In apocalyptic times like these, the last thing I’m thinking of is how my cleanly-shaved legs look — especially since I haven’t been shaving them as often.

But one afternoon, scrolling down my Twitter feed, I, for the first time in decades, was compelled to think about the appearance of my legs. I came upon a Tweet that included a pair of close-up photos of Beyoncé‘s legs. The queen’s gams are indeed a sight to behold, but it was the caption that threw me. “Beyoncé has strawberry legs like me,” the person wrote, adding a cute-eyes emoji to the post.

“Strawberry legs?” I said. “Now, what in the world?” The image of Beyoncé’s legs revealed tiny little dark spots where her hair follicles are. They’re a feature I noticed about my legs when I started shaving them as a pre-teen, and I hadn’t thought much about them since. At the time, the legs that I saw in the media were typically airbrushed and smoothed into one uniform color. This was the early 2000s, so you know there was nary a nick, a scratch, or scar in sight. But after looking around at my classmates and noticing that almost everyone had tiny pores on their freshly-shaven legs, I moved on. I never thought of it again — that is, until I saw this Tweet.

I have to admit, my lizard brain almost immediately went to “Is this something I need to worry about now?” But after reading it again, I got the impression that the original poster wasn’t trying to express there was anything wrong with your legs looking like this. Indeed, it appears she felt seen and normalized by the images. But still, I was a little bothered. Not by the poster, of course. I was more upset with society making us think perfectly normal, often innocuous features on our bodies need to be “fixed.” Even when you Google the term “strawberry legs,” the top results are all articles on how to get rid of them.

The truth is that “strawberry legs” is more of an encompassing term that can colloquially describe something as harmless as dark pores, or an actual condition that comes with chronically dry skin. “The term ‘strawberry legs’ has been used to describe legs that display prominent red or black dots representing hair follicles,” Birmingham-based board-certified dermatologist Corey L. Hartman tells me. “The name comes from the resemblance to the seeds of a strawberry.”

For most people, “strawberry legs” ain’t nothing but some ol’ hair follicles. Seriously — that’s it. The only time to really worry about them is if you’re dealing with an actual skin issue. “These dots can represent several different skin conditions, however, and the follicles are more prominent because of the buildup of oil, bacteria, and dead skin cells,” explains Hartman. “Strawberry legs can be used to describe folliculitis, keratosis pilaris, clogged pores, and dry skin.”

By stufflovely
15 hours ago
Uncategorized

By stufflovely
21 hours ago
Uncategorized