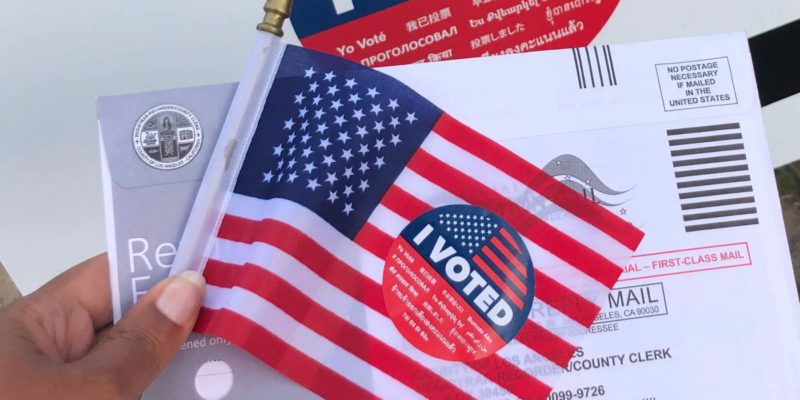 
There is so much good news from the 2020 American election to focus on. From record voter turnout to a historic number of Native Americans winning seats in the 117th Congress, here’s a look at some of the most exciting stories to come out since Tuesday.

This election saw the highest voter turnout in more than a century.

The U.S. Elections Project, which tracks voter turnout, has found that more than 160 million Americans voted all in all.

Representing 66.9% of the potentially eligible voting population, this marks the largest voter turnout since 1900.

A large number of young people registered and cast their vote.

More than 15 million people have turned 18 since the last presidential election and have registered to vote en masse. In Idaho, Minnesota, Georgia and Vermont, registered young voters exceeded 2016 figures by more than a third.

the Information Research Center and Learning and Civic Participation (CIRCLE) has been tracking early and absentee voting for 18-29 year olds: it found that more than seven million young people across the country had already cast their votes by October 27, including more than four million in 14 key states.

Americans who are too young to vote have registered as poll workers.

In the 2018 midterm elections, approximately 58% of poll workers were 61 or older, So the young citizens volunteered to eliminate the risk of older people being exposed to the COVID-19 virus.

In fact, more than 37,000 young people, some of whom are too young to vote, signed up to be poll workers on November 3 through the Poll Hero Project.

RELATED: Democracy became delicious: ‘Pizza for the polls’ delivered free food to hundreds of thousands of voters in long lines

Foreign interference was not the problem it was in the 2016 election.

Despite concerns about misinformation and hacking attempts coming from Russia, China and Iran, Acting Secretary of the Department of Homeland Security Chad Wolf was able to advertise with confidence on November 3, “We have no indication that a foreign actor has managed to compromise or affect the actual votes cast in this election.”

According to Elisabeth Braw of Foreign Policy, two things have changed since 2016: “US authorities, voting machine manufacturers, and social media companies are now well aware of the risk of interference and are trying to limit it.” Additionally, the US Cyber ​​Command. Defending Forward strategy.”

Native Americans made history, with six candidates winning seats in the 117th Congress.

Three women and three men have been voted; three Democrats and three Republicans; two from Oklahoma, two from New Mexico, one from Kansas and one from Hawaii; including two Cherokee, a Chickasaw, a Ho-Chunk, a Laguna and Jemez Pueblo, and a native of Hawaii. That’s great news.

We made history for all of you!

New Mexico became the first state to elect all women of color to its House delegation.

And she tweeted this photo in front of this painting of Shirley Chisholm, who became the first African-American woman elected to the United States Congress in 1969, representing New York.

Ritchie Torres and Mondaire Jones won their races for Congress in New York. They will become the first openly gay black men in the United States Congress.

The right to repair car law was significantly expanded in Massachusetts.

In Massachusetts, a right to redress law is called “the most advanced in the world”It was voted.

Starting in 2022, automakers in the Bay State will have to share repair data beyond dealers, with consumers and repair shops. This law will allow auto owners and local mechanics to get back into the repair process, rather than restricting repairs to the dealer’s associated dealers and workshops.

CHECK OUT: Mississippi voters trade in an old Confederate-themed flag for a new design, and it’s so pretty

Voters in Magnolia State overwhelmingly approved of Citizen-Led Initiative 65, making it the 35th state to establish a medical marijuana program.

Adults in these states will be able to legally purchase recreational marijuana in the future, with Arizona tax revenues going to community colleges and “public safety.”

Currently, 11 states have legalized the full use of marijuana by adults.

Oregon became the first state to decriminalize the possession of small amounts of hard drugs.

According to the washington postThis law lays the groundwork for people with substance abuse problems to receive the treatment they need instead of spending time in jail.

The state is also the first to legalize the therapeutic use of psychedelic mushrooms.

DC even voted to decriminalize plant psychedelics, including psilocybin and ayahuasca.

Oregon is not alone in what has been nicknamed the “psychedelic renaissance”.

Voters in the District of Columbia chose to decriminalize the use of magic mushrooms and other psychedelic substances with the passage of Initiative 81, making entheogens among the lowest law enforcement priorities for the Metropolitan Police Department.

SHARE the good news of the 2020 elections on social media …

15 Quotes About Self-Control to Remember When You Feel Angry |

Research Suggests a Link Between Polluted Air and Cognitive Diseases